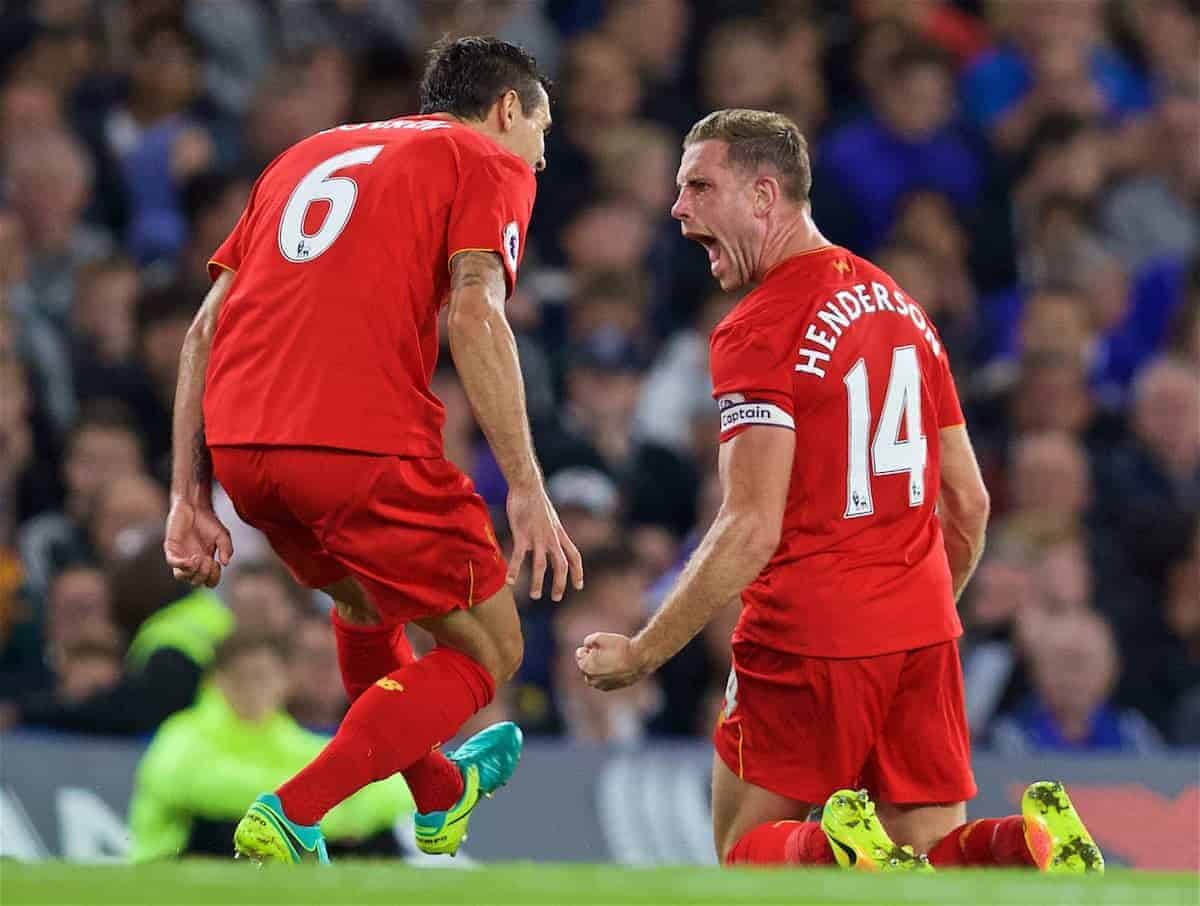 A Friday night victory leaves Liverpool fans to enjoy the weekend! Neil Poole provides the good, the bad and the relaxing from the 2-1 win at Chelsea.

After ballooning the ball over the crossbar from 12 yards against Leicester last Saturday, it’s clear Jordan Henderson has since been working on his trajectories. Hit the ball from about 25 yards instead of 12 and those mo-fos fly in. Simple.

Honestly, what a goal though. Another baby nearly fell out of Mrs Neil, that goal was so wildly celebrated in our house. And she’s not even pregnant.

It’s the goal that keeps on giving. Followed by a Jordan Henderson knee-sliding celebration, it’s great to see the sheer joy on that boy’s face when he scores. We haven’t seen enough of it over the last two seasons and there’s been a clear uplift in Henderson’s form over the last couple of games that we can only hope continues.

Whilst we’re on goal celebrations, if you can check out the bench’s reaction to that goal again please do so. Look past Jürgen Klopp throwing his classic chest-beating, imaginary defibrillator shapes. Instead have a look at Marko Grujic, stunned, open mouthed, and catching flies behind him. That’s how special that goal was.

You can stretch that to the ninth different goal scorer in all six games played if Burton is included. Five or six games is admittedly a small sample size, but it’s difficult to not begin to feel the twinges of excitement that we may just have overcome the longstanding dependency on just one or two players and a complete dearth of goals elsewhere in the team.

Furthermore, add to the breadth of goals, the quality. The majority of goals scored have all been a bit tasty. Already it seems that Mane’s August goal of the month in August will be joined by Jordan’s Thibaut Courtios ‘reducer’ at the end September.

Such is the feel god factor of that win, I’m even throwing in the conceded goal as positive.

It’s the third game on the trot that we’ve conceded but rode out the subsequent storm. Conceding a goal a piece against Spurs, Leicester and Chelsea is a concern. However, the bar for our defending over the last few years has been set so low that the incremental improvement of simply holding our nerve after conceding can be taken as a positive.

Take a minute, think back, and you’ll soon recall that for a long time now we’ve picked up a nasty habit of capitulating and routinely watching second or third goals quickly follow the first conceded. Let’s be fair we even did it in the first two games of the season!  We’re only a further three games on but the mood couldn’t feel more different.

We can beat ourselves with sticks about Chelsea’s one solitary goal that didn’t even get them a draw if we want. But the reality is a team of their quality, 2-0 down at half time and playing at home are always going to come back strong. Clawing one back is exactly what happens game in, game out across the leagues. We’ve seen Liverpool do it enough times.

Feet on the ground and all that. Let’s see how we do against the likes of Hull and Swansea. We know what normally happens after we beat one of the ‘big’ teams. And, while we’re talking about big teams, where were Chelsea’s famous plastic flags on Friday night anyway?

I’m not saying a bad word about Liverpool. This one is to be enjoyed.

However, for the sake of fulfilling the brief given to me by my ‘This is Anfield’ overlords, I’m going for the Chelsea fans. Booing their side at half time when they’ve been put the sword by Jürgen’s Cavalier’s and football that even an immortal couldn’t live with, is everything to be expected from that rabble. Just accept we’re boss and get a grip you weirdos.

I’m clearly not talking about the second half. That was tense.

However, what are you doing this weekend?

Don’t worry, I’m not trying to seduce you. But I am highlighting that Friday night football now makes absolute sense as we commence the weekend with three points in the bag and not a care in the world.

Sit back and watch all those weekend-playing losers slumming it in the daylight and without the comfort blanket of pre-ordained points.

Friday night Premier League football is a contentious issue if you choose to make it one. As a general misery I’ve made it an issue since it was first announced. Whether it’s viewed as flaying the final vestiges of the traditions of the game, or the difficulties it poses for travelling fans or just the simple, gnawing feeling that there is such thing as too much football, there are plenty of arguments against Friday night football.

Conversely, chatting to those who are foot-loose and fancy-free and able to construct ‘all-dayers’ or ‘all-nighters’ around a game of footy, I see why they are enamoured with the idea. My grumpiness has well and truly been put in the box. All power to those of you with social lives.

Friday is over. Our team won. Me, I’m going to put my feet up, watch the weekend unfold and relax.

You can too. Marvellous.