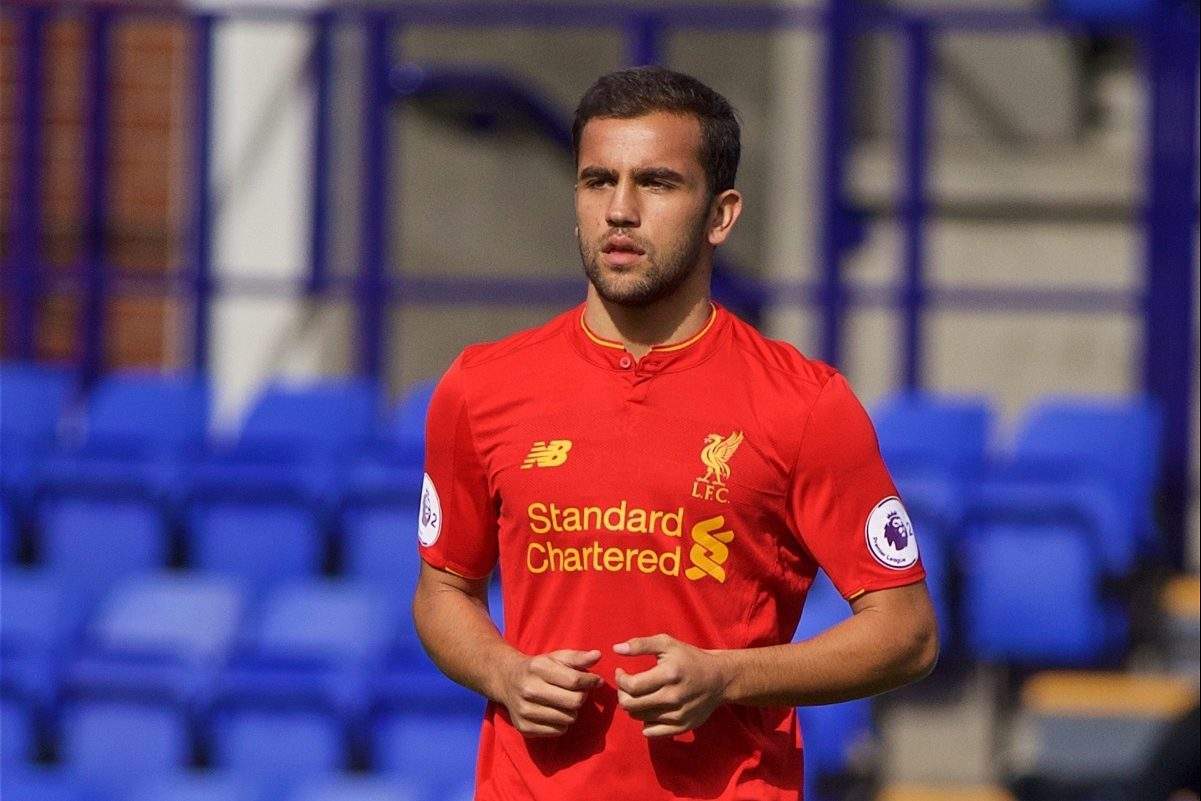 Liverpool U23s made a shrewd acquisition in signing former Barcelona defender Juanma this summer, with the Spaniard bringing considerable talent to Merseyside.

After initial work-permit issues, Juanma has now been cleared to turn out for the U23s, and is set to a play a key role in 2016/17.

But while Beale’s squad is littered with familiar faces such as Ben Woodburn, Harry Wilson, Ovie Ejaria, Cameron Brannagan and Trent Alexander-Arnold, Juanma is still a relative unknown.

The 19-year-old could well emerge as one of the breakout stars of the academy in 2016/17, so who is Juanma? Juanma, whose full name is Juan Manuel Garcia Rey, joined Barcelona as a 10-year-old in 2008, taking his place at the club’s famed La Masia academy.

Developing in the same setup that developed Lionel Messi, Andres Iniesta and Gerard Pique among others, Juanma was provided the ideal backing to hone his talents as a young defender.

He rose quickly through the club’s youth ranks, with successive promotions in 2012 and 2013, settling in the U19s squad, Barcelona Juvenil A.

While his upbringing came in Barcelona, Juanma has previously named his footballing idol as Real Madrid stalwart Sergio Ramos, and his development as a young player has arguably mirrored that of the Spain international—albeit on a much, much smaller scale.

Juanma is a versatile defensive talent, capable of playing at both centre-back and left-back, and clearly possesses leadership qualities, captaining Juvenil A throughout 2015/16.

Seven of his appearances last season came in the UEFA Youth League, taking on the likes of AS Roma, Bayer Leverkusen and BATE Borisov, suffering just one defeat, away to Anderlecht in the quarter-finals.

But reaching a crucial stage in his development, and with his contract ending this summer, Juanma opted not to extend his stay with Barcelona, allowing Liverpool to swoop in.

What Does He Bring to the U23s? So far during his short spell with Liverpool, Juanma has largely been fielded at left-back by Beale, who saw Brad Smith (Bournemouth, permanent) and Sam Hart (Port Vale, loan) both leave this summer.

Juanma did operate at centre-back in a three-man defence for an U20s selection in a 6-1 friendly win over Qatar, with Beale clearly willing to utilise his flexibility.

“I quite like him, he reminds he a little bit of someone like a Pablo Zabaleta-type player, a nice player.”

Comparing Juanma with Manchester City veteran Zabaleta is a bold call by Beale, but there are clear similarities in the two players’ outlook.

Juanma is an aggressive ball-winner, with a mature approach to marking his opposite number, but is also comfortable pushing forward, likely owing to his development at La Masia, where a possession-based game is employed.

Notably, Juanma is also able to call upon a formidable long throw, and this will no doubt aid him in his transition into English football.

But will Juanma be more Bartra and Roberto, or Montoya and Gomez?

Can We Expect Him in the First Team Soon? While both Brendan Rodgers and Jurgen Klopp have displayed a willingness to promote young talent from the Liverpool academy in recent seasons, there has been a distinct lack of defensive graduates from Kirkby.

Smith, Jon Flanagan, Martin Kelly, Andre Wisdom, Jack Robinson, Stephan Sama, Lloyd Jones, Connor Randall, Joe Maguire and Dan Cleary have all been given opportunities to impress in the past five seasons, either in training or in first-team outings.

But only five of those remain on the books at present, with Randall the only player to stay on Merseyside for the 2016/17 campaign, owing to a lack of right-back options in Klopp’s squad.

Alexander-Arnold may prove to be an exception, but there is a clear paucity of defensive quality in the Liverpool academy.

Already 19 on his arrival on Merseyside, Juanma may well have been earmarked for a swift progression, but a number of factors stand in his way.

Most notably, this comes with the language barrier, as a teenager moving to a new country with little grasp of the native tongue—something that is near essential within a successful back line—while general adjustment to English football also adds to what could be a difficult transition. Very few young Spanish defenders make the move to England and immediately settle, with Daniel Ayala’s slow, seven-year progression from Liverpool academy to the Middlesbrough first team, via several muted loans in the Championship, a key example of this.

However, though Klopp is loathe to admit it, Liverpool still need reinforcement at left-back, with question marks over the future of Alberto Moreno and the fitness of Joe Gomez.

Juanma’s ability to cover both left-back and centre-back is a major bonus, and he could provide competition for the likes of Gomez in the future.

It would be unwise to expect big things early, but after a season with the U23s, Juanma could hope to break through in the future—and establish himself as a first-team option under Klopp.