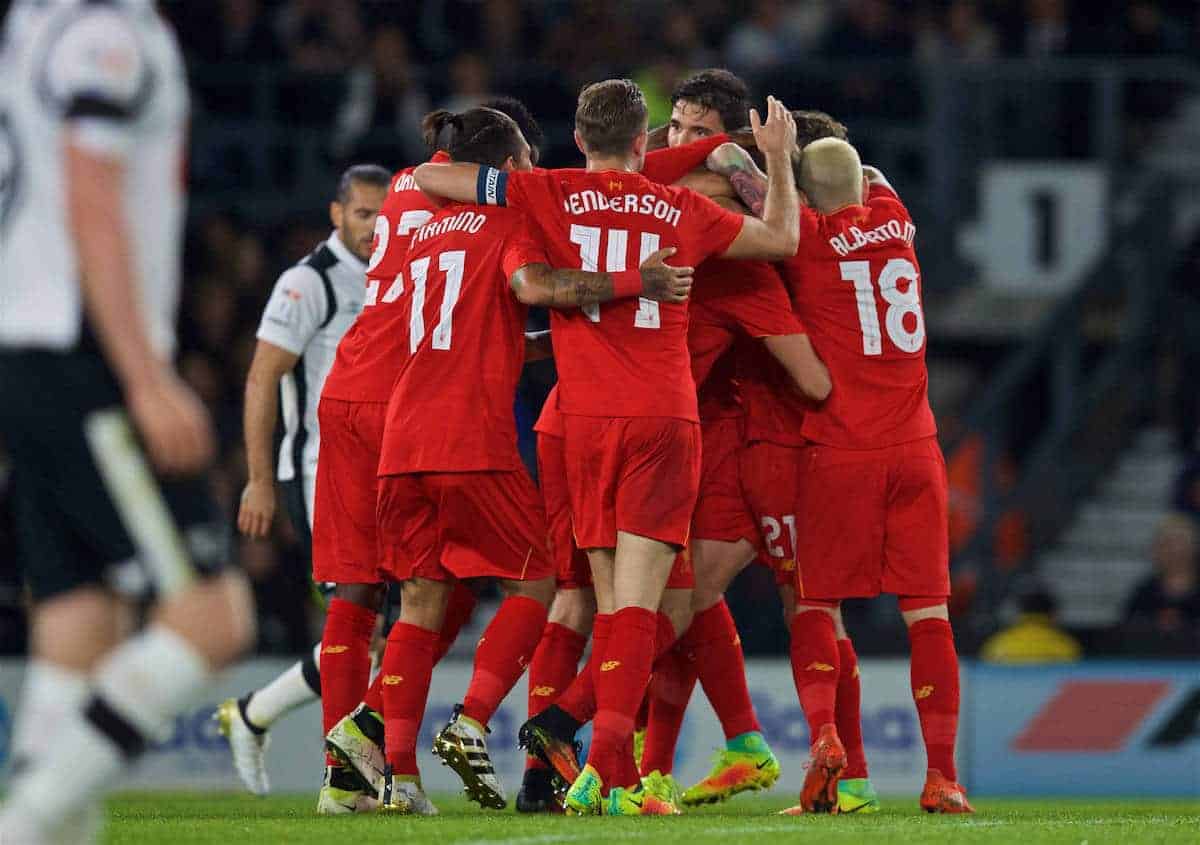 Liverpool booked their place in round four of the League Cup with a 3-0 win over Derby County following a dominant performance that will have pleased Jurgen Klopp.

A brilliantly worked goal, made by Roberto Firmino and converted by Coutinho, doubled the advantage five minutes after the restart, before a fine finish from Divock Origi made it 3-0 four minutes later to seal victory.

It was a completely dominant display from the Reds who ensured of their place in the draw for the next stage, and here are the talking points from a successful night. The German goalkeeper made his long-awaited debut at Pride Park, and he enjoyed a positive first outing showing his quality, especially with his distribution.

Karius instantly looked at home behind Liverpool’s changed defence and the 23-year-old showed some of the attributes he will bring to Anfield, with his comfort in playing from the back and his eagerness to release the ball quickly most notable.

The German played with real composure throughout – barring one sliced kick as he tried to release Coutinho sharply for a counter-attack – even finding time to pick out Klavan with a delightful scoop in his own box, displaying his level of self-belief.

Also noticeable was how proactive Karius was, taking up aggressive starting positions to allow him to help his defence by sweeping up and quickly thwart developing danger – best displayed before half-time when he sprinted out to stop Darren Bent as he looked to break into the box.

Klopp said pre-match there is no No.1 at Anfield currently, stating he has “two really strong ‘keepers” but following Karius’s promising first outing, it will be interesting to see who starts against Hull on Saturday. The much-maligned Spaniard started at left-back for the first time since he lost the position after that Arsenal display. Moreno ensured it was a smoother 90 minutes on his second full appearance of the season.

Moreno’s bleach blonde hair ensured of a different appearance on the left of Liverpool’s defence, but it was the change to a more measured approach that impressed as he offered a composed figure in an assured display alongside Klavan.

Though the desire to burst forward and support attacks remained – a big positive of Moreno’s game that saw him add an injection of pace and a natural left-side balance to the team – moments were picked and chosen better by the recalled defender.

Though relatively unchallenged defensively by the toothless home attack, Moreno’s composure and decision making in his work offered promise that his time out of the side may have provided its purpose – with the left-back judging when to press and when to withdraw with greater control.

A composed display against Championship opposition who were totally outclassed it may have been, but it’s fair to say Moreno was encouraging on his return. Restricted to cameo roles since his first start of the season in the last round, Klopp handed Origi the start he desperately hoped for to build on his second half run-out at Chelsea.

Rusty at Stamford Bridge – and at Tottenham before that – the Belgian showed his game time has not been regular during these early weeks with some poor moments – wayward passes and erratic touches early on, most notably when leading a counter-attack that went to waste following a sloppy miscontrol.

But receiving instruction from Klopp throughout – mostly on the need to anticipate how play may develop to be able to then move early to receive – Origi worked through the early errors to re-establish some confidence, earning deserved rewards for his endeavour with a fine goal.

After playing a role in Coutinho’s goal with a clever run, Origi darted behind Derby’s dizzied defence again – seeing and moving early as Klopp asked – triggering Coutinho to find the 20-year-old who thundered home on the angle, sealing victory and visibly boosting confidence.

Playing with a freedom thereafter, games like this can provide a welcome exercise to find form and build confidence, and it proved just that for Origi. It was a special night in Derbyshire, as the travelling Kop were treated to the latest magic act from Liverpool’s Brazilian magicians.

Operating in support either side of Origi, Coutinho and Firmino turned on the style, producing some absolutely majestic football – bordering on exhibition stuff at times – which provided the catalyst for victory.

The interchanging of positions, movement and intricate exchanges between the pair were a joy to watch, and too much to handle for the home side – displayed best in the magnificent second goal made and produced in Brazil, with Firmino’s perfectly weighted pass – into the area cleverly vacated by Origi – finding his onrushing compatriot who slotted home.

It was a deserved goal for Coutinho, who was involved in all three goals, posting assists for Klavan’s opener from a corner and laying on a fine pass to release Origi who crashed into the roof of the net in remarkably similar fashion to that seen in the 6-1 hammering of Southampton last season.

The duo nearly capped of the night with an outrageous effort, with Firmino not quite managing to volley home Coutinho’s first-time volleyed cushion back, but that they tried it showed the mood and dazzling form they were in.

And when they’re in it, there’s no stopping the Brazilian brilliance. Klopp had indicated that changes would be made to his team in his pre-match press conference, but few would have anticipated the Liverpool boss to make as many as sufficed.

But that Klopp opted to rotate more heavily than at Burton in the last round by making seven changes here to the four made on the last trip to Derbyshire, proved an inspired move from the German, who used the quality and depth of his squad perfectly.

Giving Dejan Lovren and James Milner nights off and affording the same for key men Adam Lallana, Georginio Wijnaldum, Sadio Mane and Daniel Sturridge was a welcome move after the big performances produced in the league recently, guaranteeing all will be fresh for the weekend.

And Klopp’s decisions on who entered were just as productive, with much-need game time handed to back-up options Klavan, Moreno, Lucas, debutant Marko Grujic and Origi to enjoy game time and more crucially, build confidence and form to give the manager something to think about.

That performance level remained as the first-choice XI have produced in recent games was hugely impressive and allowed for further sharp in-game management that saw Jordan Henderson, Firmino and Coutinho withdrawn and a welcome return for Danny Ings and debut for Ovie Ejaria.

The quality is most definitely there, and Klopp used it to perfection.