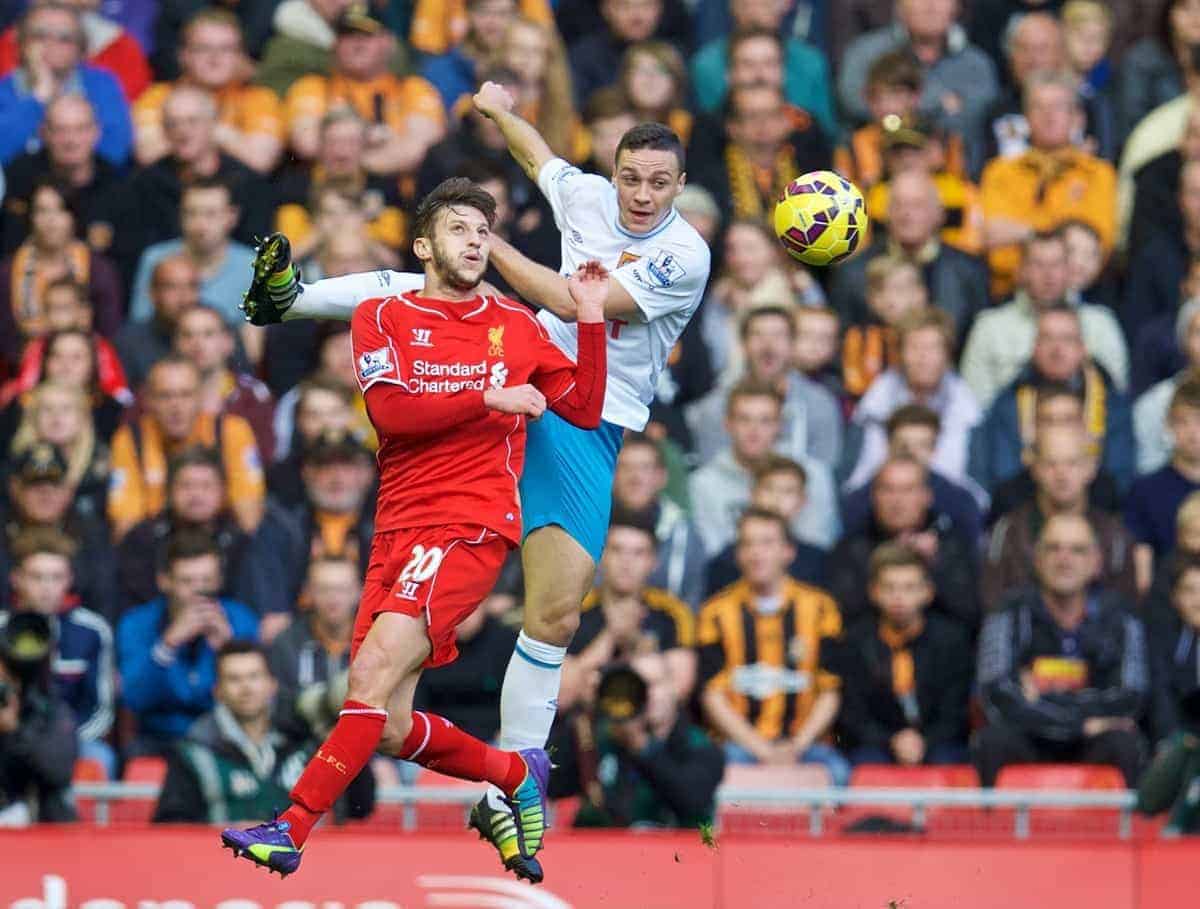 Liverpool are looking for a fifth win in six matches on Saturday, when they welcome newly-promoted Hull City to Anfield.

Having won 3-0 at Derby Country in the League Cup on Tuesday, the Reds now divert their attention back to the Premier League.

Despite a tougher start than any of their rivals, Jurgen Klopp‘s side lie sixth in the table, and are now second-favourites with the bookies to lift the title in May.

There’s certainly a reason to be feeling excited at the moment, even if we have experienced plenty of false dawns in the past.

Saturday’s showdown with Hull is an enormous game, mainly because of Liverpool’s woes in matches of this ilk over the years.

We all know how good they are against the top sides, but it is the weaker teams who have ensured the Reds come unstuck in recent times.

Three points at Anfield would be a sizeable mental barrier hurdled, as Klopp and his players look to end that long 26-year wait for a maiden Premier League crown.

Hull have had a good start in their own right, beating champions Leicester City on the opening day, and they will not go quietly on Saturday afternoon.

We spoke to Hull fan Rick Skelton (@HullCityLive) to talk about the Tigers’ start to the season:

Hull have seven points from their first five games, having faced Leicester, Man United and Arsenal. You’d have taken that, right? Are you happy with how you’ve been playing?

Burnley are very much our bogey team, and we had Swansea away too, so seven points so far is a fantastic haul. With the trip to Anfield next and then Chelsea at home, I’d have taken a couple of points from the first seven games. To be guaranteed at least seven is fantastic, especially when you consider our tumultuous summer and the mess we were in with no signings and four major injuries.

We’ve played well though. We’ve set up to be difficult to break down and counter-attack on the break and we’ve done both brilliantly. Do you believe Hull will have enough to stay up this season, or are you still a little pessimistic about your chances?

We’ve got some really good players. We always did have plenty of quality and now we’ve got a little bit of depth, we can have a real go.

Being really honest, there are some very average looking teams in the league. Swansea and Burnley who we’ve already faced, Stoke who’ve started poorly, Sunderland who are always rubbish until Spring and more besides. So we’ve got as good a chance as six or seven others.

Are you happy with Mike Phelan as manager?

Yes. He’s done a good job in difficult circumstances. His team is very well organised. He’s got players out of position, like Jake Livermore at centre half and Sam Clucas as a defensive midfielder, who look like they’ve played there for years.

He’s also encouraged a good team spirit. For all the trouble at the club surrounding the hideous owners, the relationship between the players and fans is incredible and Phelan is part of that.

Onto Saturday’s game: Which Hull players do you see as key to your chances at Anfield? And which Liverpool players strike fear into you?

Liverpool have a lot of movement between the lines and press high, a bit like Arsenal did last week, so it’s going to be a big test for the centre halves, Livermore and Curtis Davies, and the three midfielders particularly to match those runs and be disciplined enough to stop spaces appearing.

Robert Snodgrass is our best attacking weapon so he’ll need to make the most of whatever possession we get.

Phillipe Coutinho often looks the best player in the league so he’s always dangerous and Sadio Mane’s pace has given Liverpool’s attacks another dimension. Roberto Firmino looks to have settled really well now too while Adam Lallana and James Milner are always busy, cute around the area and contribute plenty. Nothing to worry about, eh?

What’s your prediction for the game, and how do you see the match panning out?

I think Hull City will make it difficult for Liverpool to play through us and our chances of getting a result will depend on how long we can frustrate for.

I see a narrow defeat for The Tigers which wouldn’t be too bad a result if our spirit is intact coming out. We don’t want a spanking like Leicester got. Klopp says no “final decision” has been made yet on whether Loris Karius or Simon Mignolet will start in goal, although the former looks favourite to get the nod.

Both Adam Lallana and Georginio Wijnaldum are available for Saturday’s game, having not featured against Derby.

Daniel Sturridge returned to training on Thursday, although Klopp didn’t sound quite as confident that he would start proceedings.

Klopp will have to decide who he plays in attack, with Philippe Coutinho, Sadio Mane, Roberto Firmino and Sturridge realistically battling for three places in the starting line-up.

The Reds’ back four and midfield three picks itself, with only the ‘keeper dilemma and up front to decide.

Mike Phelan has no new injuries to worry about, although Alan McGregor, Michael Dawson and Alex Bruce are all long-term absentees. Klopp made it clear that he and his players will not take Hull lightly, with much written about Liverpool’s struggles against inferior teams:

“We have to create chances against each team, we did it [against Burnley], but didn’t score. I’m not sure Hull will [sit back like Burnley], but I didn’t see a a lot of space against Chelsea or Tottenham.

“[They had] 10 men behind the ball, nobody gambled, all involved in defending. If there’s anything, it’s a moment when I’m not angry but not happy with my English.

“I think we all can improve—team, coaches, manager and the crowd—because it’s all about expectations. If you create a chance against Chelsea, it’s positive; if you miss it, it’s positive.

“If you create a chance against Burnley and miss it, it’s negative.

“We don’t have to rate the opponent before the game, no football game is easy.”

One to Watch: Robert Snodgrass

Hull aren’t a side blessed with creativity and threat in attack, but Robert Snodgrass is one of the few who can hurt you on his day.

The Scotland international has enjoyed a superb start to season, scoring four goals in six appearances from his right-sided role.

Capable of cutting onto his left foot and weaving some magic, Snodgrass is one that James Milner will have to monitor closely on Saturday.

The 29-year-old is not a world-beater, but on his day he has undeniable quality.

Given Liverpool’s unstoppable recent form, it is no surprise to see them as very strong favourites to pick up all three points at Anfield.

The game is not live on UK television, but our matchday liveblog will be keeping you up to date with the action, as ever. We will go live at 2:15pm (BST), with the match kicking off at 3pm.