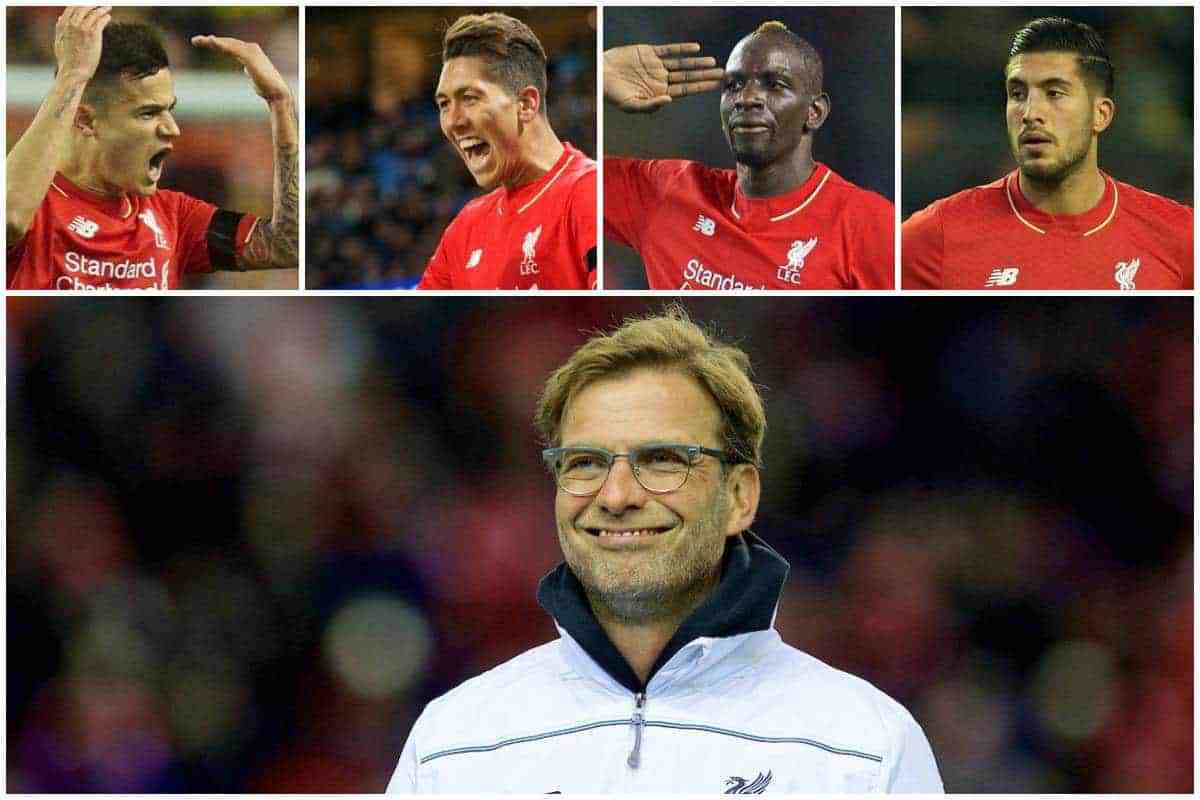 Brazilian duo Philippe Coutinho and Roberto Firmino are among those to produce defining performances in Jurgen Klopp‘s first year at Liverpool.

After 12 months in the dugout at Anfield, Klopp’s squad is looking settled and ready to challenge at the top end of English football.

The Reds currently sit fourth in the Premier League table, having taken 16 points from a possible 21 so far, building on a maiden campaign under the German that saw them reach the finals of the Europa League and the League Cup.

Liverpool are a collective, rather than a squad furnished with one or two stars, but despite this there have been a number of excellent individual displays during Klopp’s reign so far.

Here is our pick of the top five, with Coutinho and Firmino both featured. Coutinho has served as Liverpool’s talisman for much of the past 12 months, but he has also flitted in and out of those games at the same time.

In November’s 4-1 drubbing of Man City, however, the 24-year-old was at his magical best from the first whistle to the last.

The hosts couldn’t handle his movement, creativity and unpredictability, and he scored and assisted on a thrilling evening at the Etihad.

People will immediately think of his match-winning performance at Chelsea last season as his best performance under Klopp, but he was far superior against City. Having struggled to find consistency in his first few months as a Liverpool player, Firmino was finding top form by the time Arsenal came to town in January.

In a game that the Reds easily deserved to win—they drew 3-3—the 25-year-old was his side’s best player, as he continued to silence his critics.

His ruthless finish put Liverpool 1-0 up in the first half, before a stunning 25-yard strike found the top corner to make it 2-1, after Aaron Ramsey had equalised in between.

It wasn’t simply Firmino’s goals that stood out, though, with his off-ball work ethic and intelligence catching the eye just as much.

Everything about the thrashing of City will put a smile on the face of any Liverpool supporter, but most pleasing was that it was the night Firmino came of age in a Reds shirt.

Until that point, the Brazilian had been largely disappointing, but he was unplayable at the Etihad, toying with Manuel Pellegrini’s men.

He played a key role in Eliaquim Mangala’s own goal, produced a wonderful reverse pass for Coutinho’s strike and tapped home from close range to score his first Liverpool goal.

One lovely piece of skill by the corner flag outlined the confidence Firmino was playing with, and he also volleyed agonisingly wide.

He has gone from strength to strength in the 11 months since his City masterclass, but this remains his best performance for Liverpool so far. Mamadou Sakho’s popularity has dipped significantly in recent months, following his off-field issues, but some exceptional displays last season should not be forgotten.

There were a number of Sakho performances that stood out, particularly in the Europa League, and it was away to United in the last 16 that he was truly brilliant.

With Louis van Gaal’s side going 1-0 up early on, Liverpool were on the ropes, but Sakho marshalled the troops and played like a man possessed.

The 26-year-old was a colossus at the heart of the Reds’ defence, making 12 clearances, three blocks, one interception and winning five tackles—he even completed 93 percent of his attempted passes.

It was an almost perfect centre-back performance, and unfortunately, the failed drugs test that occurred after the game has derailed his Liverpool career.

To return from injury in a game of such magnitude, and produce such an influential showing, says everything you need to know about Emre Can‘s character.

The young German came back into midfield for the semi-final second leg against Villarreal, and looked like he had never been away.

A wonderful pass to Nathaniel Clyne played a key role in Bruno’s own-goal opener, and the level of authority he showed in front of the back four was something you would expect from a player far older.

There was not a single aspect of Can’s play you could pick holes in, and he was comfortably the most influential player on the pitch—on a night littered with excellent Liverpool performances.