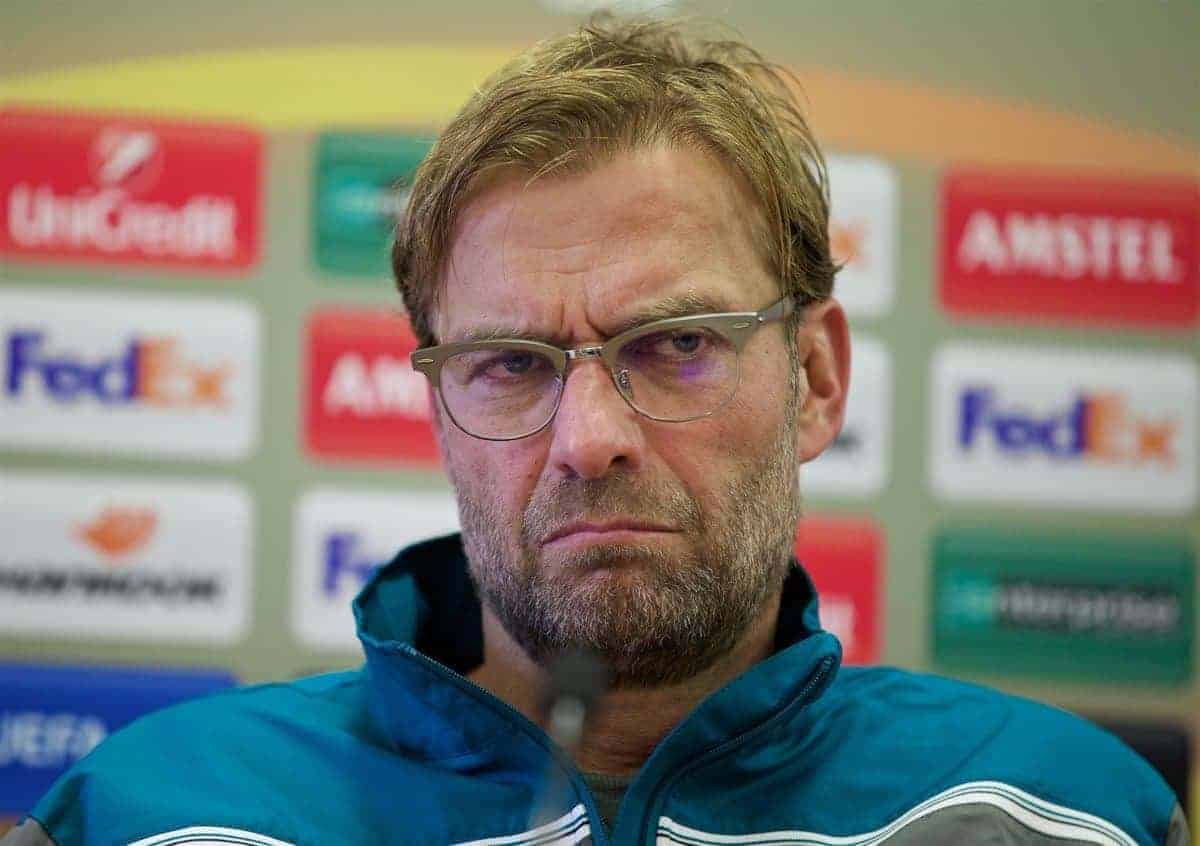 Since Jurgen Klopp took over at Liverpool, plenty of tactical terminology has been thrown around, but what does it all mean?

This isn’t an exhaustive list, but it contains some phrases and formations which will regularly be spoken of when discussing Liverpool.

Other items in the list might not apply to the current tactics at the club, but may do in the future. They might also be used by opponents.

To start with, we look at the two main formations used by Klopp so far.

4-3-3 is a basic description of any formation which has four defenders, three midfielders and three attackers.

The two wide attackers are very important to this shape. If they drop back too far into the midfield, leaving the central striker alone up front, the formation becomes a 4-5-1. The midfield in a 4-3-3 can consist of various configurations, but usually forms a 2-1 or a 1-2 shape in the centre of the park.

The 4-2-3-1 formation is the system Klopp favoured at his previous club, Borussia Dortmund.

This formation uses a double pivot (see below) in the deeper area of midfield, with three attacking midfielders ahead of them.

Klopp has spoken of the 4-4-2 system he played in during his days at Mainz, and the 4-4-1-1 defensive shape isn’t far from this.

The WM formation was created by then-Arsenal manager Herbert Chapman and one of his players, Charlie Buchan, in 1925.

After a change in the offside law meant that the attacker now had to be in front of the second to last defender, rather than the third, Buchan suggested that a centre-half be pushed back into the defence to control the offside trap. Prior to this the trap was set by both full-backs.

This gave the inside forwards more room to drop into midfield, creating the W shape at the top, and the M at the bottom. Numerically it would be 3-2-2-3. Liverpool were among the teams who adopted the formation, and variations of it lasted until around the mid-1960s when many teams started to play with a back four.

Though many football tactics will come back into fashion, it’s taken a while for these old formations to resurface, as the game in the early 19th century was very different to the one we see today.

However, with the introduction of defensive midfielders acting as sweepers, central defenders splitting wide, and full-backs who tuck into midfield, we might finally be starting to see the return of the WM.

Centre-half is a term often used to describe a player taking up the centre-back position. This can sometimes be a misleading description.

In the early days of organised football, the centre-half was the central midfielder who would play ahead of the two full-backs in what was roughly a 2-3-5 formation.

The term centre-half originates from the longer explanation of this position which would be the central half-back.

As the game evolved, the centre-half dropped back into defence to form a back three, becoming a central back. Today a centre-half would be a defensive midfielder like Emre Can or Sergio Busquets. They have good defensive qualities but are also technically good enough to participate in attacking moves.

A false nine is a forward who takes up a position against the opposition defence, before dropping deep into an attacking-midfield position.

The line between a false nine and an attacking midfielder can be blurred, especially as different players will play the false nine in different ways. Roberto Firmino, for example, will play the false nine role like a forward, whereas Philippe Coutinho will look more like a very advanced attacking midfielder.

It’s a role occasionally used when Firmino plays as the centre-forward, but a lot of the time he acts as a complete centre-forward rather than a false nine, getting in behind defenders as well as dropping deep.

“Ich bin ein Raumdeuter,” announced Thomas Muller in 2011, thus creating a new role for himself and others on the football pitch.

Thomas Muller has the best on-field brain in football. While a manager or a coach needs hours of video to pick holes in an opposition defence, Muller does it in real time on the pitch, and that’s what this role is all about.

It literally translates as “space investigator” or “space interpreter,” and the player is one whose intelligence can mean that one minute he’s hanging around in the area, and the next he could be stopping a counter-attack.

This reading of the game, plus the work rate, applies both in and out of possession. The closest Liverpool have had to this in recent years would be Dirk Kuyt: not technically the best, but a vital asset to his side due to his ability to get into the right places on the pitch.

Like Muller, Kuyt was a striker who ended up playing from the right, working hard, but also working cleverly and still getting on the scoresheet.

A football pitch is regularly spoken of as being split vertically into three—the midfield and two wings.

The area which is rarely mentioned is the half-space, which is the area between the wing and the midfield, splitting the pitch into five. When Klopp spoke recently about the full-backs getting into the half-space, he meant that they don’t always have to overlap, and can sometimes move closer to the centre of the pitch to get involved in the buildup play.

Liverpool’s wingers will drop into the half-space when cutting inside.

Coutinho likes to play in these areas and some of his best work, plus the odd goal, comes from this part of the pitch.

Gegenpressing is the counter-pressing system made popular by Klopp.

While the tactic isn’t necessarily a new one, and forms of pressing have been practised for decades, Klopp’s use of the system at Dortmund took it to a new level.

It involves the use of pressing to win the ball back immediately after it’s lost, taking advantage of the lack of shape in the opposition defence to create chances in attack once the ball is won back.

The team will smother the opposition, giving them very little room to manoeuvre, and support players will block off passing lanes while the man closest to the ball attempts to win it back.

It capitalises on the opposition’s uncertainty as they reorganise and look to transition from defence to attack—and if the press is successful, their inability to make another quick transition from attack to defence.

It’s for this reason that gegenpressing is an attacking tool rather than a defensive one, and Klopp has described it as his best playmaker.

A double pivot is used in any formation which includes two deeper-lying midfielders.

A common double pivot will include one defensive midfielder who helps to protect the defence, and a playmaker or box-to-box midfielder who starts attacks from deep before venturing further forward.

This midfield pairing is popular in Brazil, and Liverpool’s own Lucas Leiva would often play as the box-to-box player at his former club Gremio, before being converted into the more defensive midfielder under Rafa Benitez.

At Dortmund, Klopp would regularly use a double pivot, most effectively with Sven Bender as the defensive player, and either Nuri Sahin or Ilkay Gundogan as the playmaker.

The transitional phases of play occur when possession switches from one team to the other.

Both teams then need to reorganise and rethink their aims and instructions as they settle into their attacking or defensive shape.

Transitions can happen regularly during a game, and teams need to be well drilled as to what happens when they turnover or win possession.

More phrases, positions and formations may be added to this page over time.