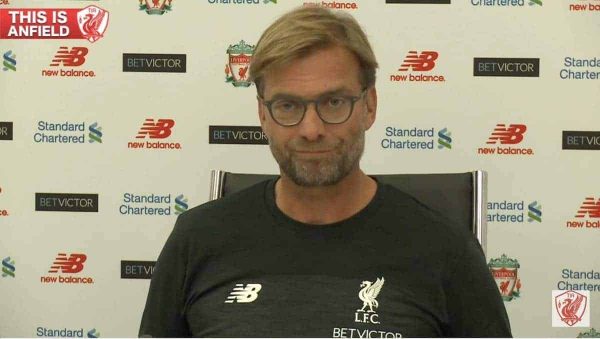 Jurgen Klopp has expressed his frustration with the latest fixture changes imposed by broadcasters on Liverpool in the Premier League.

A total of eight of the Reds’ fixture were rescheduled for December and January, with only two remaining the same—away to Middlesbrough on December 14 and at Sunderland on January 2.

The latter was the subject of considerable ire from Klopp as he addressed the media to preview Liverpool’s clash with Manchester United on Monday.

Set to take place just two days after the Reds take on Manchester City at Anfield—a 5.30pm kickoff on New Year’s Eve, no less—Klopp said that this was an unacceptable schedule.

“I got the fixtures and I’m not too happy,” he told reporters at Melwood.

“Because we have less than 48 hours between our game against Manchester City on the December 31 and at Sunderland on January 2.

“I don’t know if we can do anything, but I learn more and more about this league.

“Maybe I have to ask somebody if there can be another time for us [to play] at Sunderland.”

This presents a rather optimistic approach from Klopp, given the grip broadcasters have on the Premier League, and it is likely that the fixtures will remain the same.

But with Liverpool’s trip to the Stadium of Light not scheduled to be televised, there is still a chance.

Though, of course, this would throw supporters’ travel plans into further turmoil.