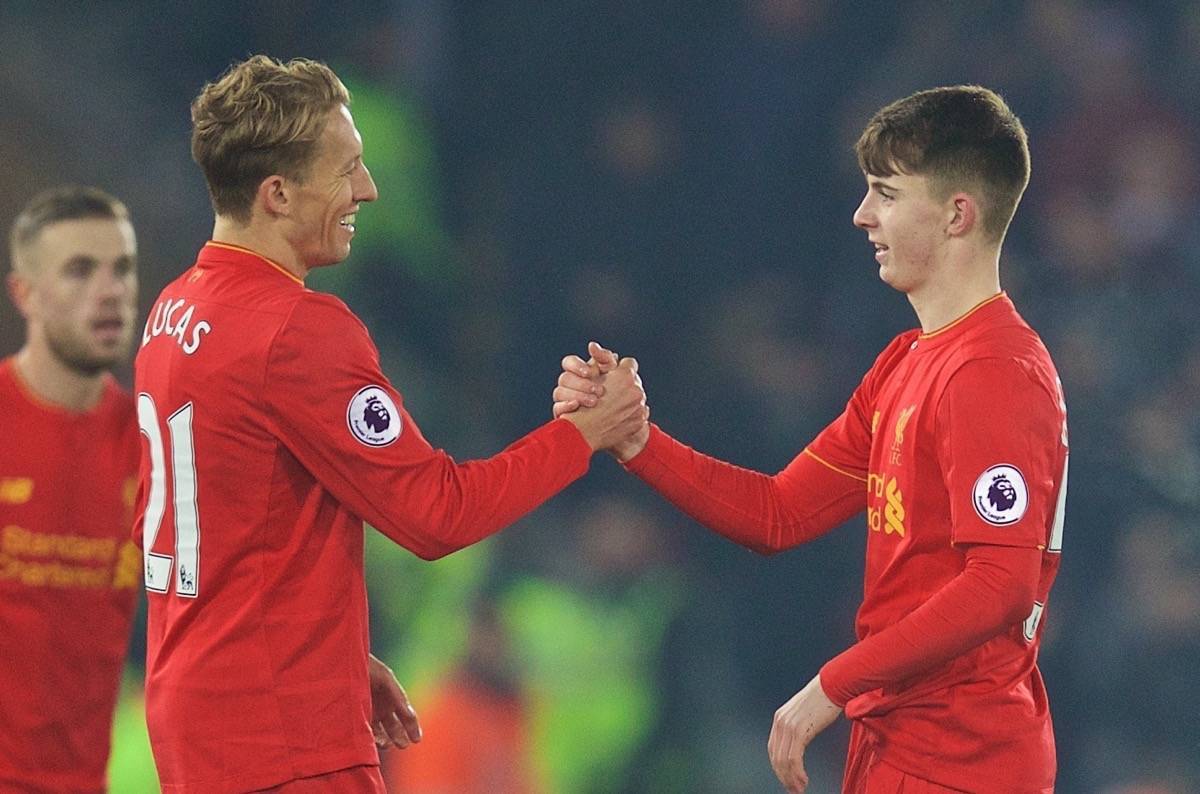 Lucas Leiva has heaped praise on the performance of Liverpool’s youngsters against Leeds United, in particular man-of-the-moment Ben Woodburn.

The Reds overcame their Championship opponents to reach the League Cup semi-finals on Tuesday night, securing a 2-0 win at Anfield.

Divock Origi opened the scoring with 14 minutes remaining, while Woodburn smashed in a close-range finish soon after, making him Liverpool’s youngest ever goalscorer.

Lucas put in a typically experienced performance at the heart of the Reds’ defence, on a “very sad day” for him, following the plane crash that killed members of Brazilian side Chapecoense.

The 29-year-old feels Liverpool’s young players are in a perfect working environment under Jurgen Klopp, and singled out Woodburn for a special mention.

“I think when you have a good core in the team, when the young players come in they feel comfortable, they feel confident and that’s what we try to do—let them express themselves because their quality is there,” Lucas told LiverpoolFC.com.

“It’s one more game for them to get experience and they just need to keep going and keep learning.

“[Woodburn’s goal] was fantastic. He came on in the last game for just a few minutes, but against Leeds he got a good run and just showed his quality.

“It was a good goal—good finishing—and he just needs to keep going.

“He is still very young and there is still a lot to learn, but he is a good boy and for sure he can go on to be a big player for Liverpool in the future.”

Lucas is desperate to win the League Cup this season—Liverpool’s 2012 triumph in the competition remains his only piece of silverware at the club—and he says the entire squad will be needed in a hectic upcoming run of games.

“It’s very good to get through again—another semi-final and we will give everything we can to win this tournament,” he added.

“Last year we came very close and against Leeds we showed not only that the squad is very strong, but also that we’re keen to win something, so congratulations to everyone.

“We want to get to the final again and hopefully win it this time. We still have two games in the semi-final and we’re coming into a busy period with a lot of games, so we will need everyone.”

As Lucas touched upon, this is going to be a period of fixtures that potentially defines Liverpool’s season.

They face Bournemouth, West Ham, Middlesbrough, Everton, Stoke City and Man City before the end of 2016, while FA Cup and League Cup commitments also come to the fore in January.

With Philippe Coutinho likely to be out until the New Year, and other key players picking up knocks, the squad depth will be tested in the coming weeks.

Sunday’s trip to Dean Court to face Bournemouth is the next hurdle the Reds have to clear, in what we all hope is a historic season.