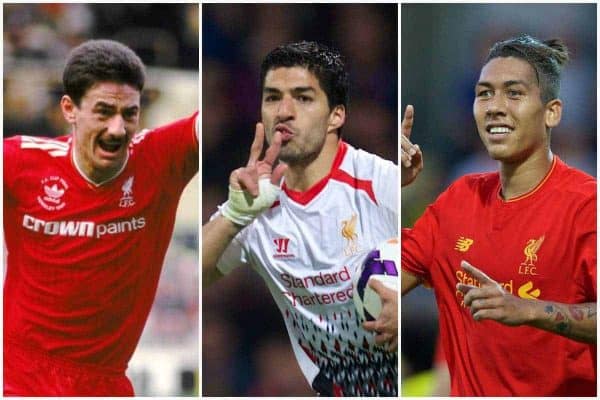 How does current Liverpool side compare with 2014 runners-up and 1990 champions?

Liverpool head into the international break top of the Premier League for the first time since May 2014 when they were managed by Brendan Rodgers.

They did not manage to end their long wait – which stretches back to 1990 – for another title on that occasion.

Success so far has been built on scoring goals rather than keeping clean sheets, which are something of a rarity.

Loris Karius replacing Simon Mignolet in goal led to an adjustment period but has not had an adverse effect and the latter’s critics would argue has strengthened the side, although that has yet to be proved in the long term.

Joel Matip‘s inclusion in central defence has provided a much-needed aerial presence and leadership while midfielder James Milner has done an excellent job standing in at left-back.

The Achilles heel of Rodgers’ side. While they were great going forward, they were vulnerable at the back and, of their 11 clean sheets that season, only two came in their last 10 matches.

Centre-backs Martin Skrtel and Mamadou Sakho were not convincing, particularly at set-pieces, right-back Glen Johnson’s best work was done going forward, while on the other flank the right-footed Jon Flanagan did a good enough job filling in but never looked entirely comfortable.

The powers of the great Alan Hansen were fading as he was affected by knee problems but the late Gary Ablett, Gary Gillespie and even Glenn Hysen—in front of the brilliant and extravagant Bruce Grobbelaar—ensured Liverpool finished with the best defensive record.

Jordan Henderson has adapted well to a deeper-lying role which has also brought the best out of Adam Lallana, who is now playing as an orthodox midfielder rather than as a forward and has brought much-needed creativity to Liverpool’s engine room.

Summer signing Georginio Wijnaldum provides a physical presence while Emre Can is starting to finally realise his potential.

With Steven Gerrard re-invented as a deep-lying midfielder, almost a sweeper on occasions, the onus was on the likes of Philippe Coutinho and Joe Allen to provide the creativity—although their job was made easier by what was in front of them.

Midfield was more substance than style with the likes of Steve McMahon, Ray Houghton, Ronnie Whelan and Jan Molby all featuring heavily, although the latter’s passing ability added a touch of class where necessary.

The forward line is where things have really taken off with Roberto Firmino, Coutinho and Sadio Mane providing pace and movement.

Firmino has been preferred ahead of Daniel Sturridge in the centre and, while it is not his natural position, his running and vision is helping create a lot of chances.

Coutinho, coming in off the left, is enjoying arguably his best season in terms of goals and assists and is having more influence on games than before.

Mane provides the searing pace and attacking thrust from the right and is weighing in with goals too.

Luis Suarez was undoubtedly the star of the show and, although Sturridge and Raheem Sterling benefited to some degree, it is unlikely Liverpool would have reached the level they did without the brilliance of their Uruguay striker.

At times he was unplayable and appeared set on waging a one-man war on opposition defences.

With an attack boasting the brilliance of Ian Rush, Peter Beardsley and John Barnes, Liverpool had the goals and the guile to get past almost any opponent and it was no surprise they were the division’s top scorers.