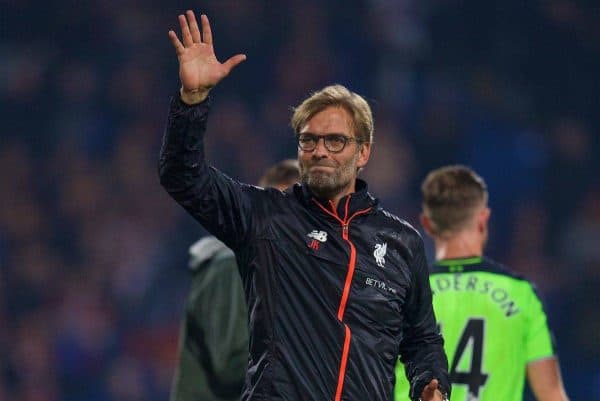 German newspaper Bild has speculated as to Jurgen Klopp‘s “Meisterplan” for Liverpool in the January transfer window.

Klopp made six signings in the summer, adding to the return of Marko Grujic from loan with Red Star Belgrade, but the 49-year-old is not set to stop there.

That is if Bild are to be believed, with reports from Klopp’s native Germany suggesting a four-strong list of January targets.

Tah is a tall, strong defender with world-class potential, having already earned two international caps under Germany manager Joachim Low despite only turning 20 in February.

The addition of Tah would certainly make sense for Liverpool, providing Klopp with another long-term option at the back alongside Joel Matip, Dejan Lovren and Joe Gomez.

Signing Dahoud would bolster Klopp’s ranks considerably, too, with the Germany U21 international, also 20, capable of competing with the likes of Jordan Henderson, Emre Can, Georginio Wijnaldum and Adam Lallana in a variety of roles.

Dahoud is an industrious, fleet-footed midfielder with a great passing range and a powerful long-range shot, and looks primed to shine in the English top flight.

Meanwhile Herrera presents a different option as, at 26, the Mexico international would be arriving in his prime.

Able to play in a number of positions across the midfield, Herrera would be a similar signing to Wijnaldum, and his energy, tenacity and flair would suit Klopp’s midfield adeptly.

Azmoun, a lofty centre-forward who has made waves with both Rostov and Rubin Kazan in the Russian Premier League, would provide Klopp with a different proposition in attack, and at 21, would be another one for the future.

All four of Klopp’s rumoured targets have been heavily linked with Liverpool elsewhere, to varying degrees of veracity, though it remains to be seen whether any will make it to Anfield.

For example, Gladbach sporting director Max Eberl recently insisted that there was a “zero percent chance” of Dahoud leaving Borussia-Park in January.

However, each of these targets does make sense on paper, and Klopp will no doubt be continuously looking at ways to improve his squad—particularly with Liverpool facing an unlikely title challenge in 2016/17.