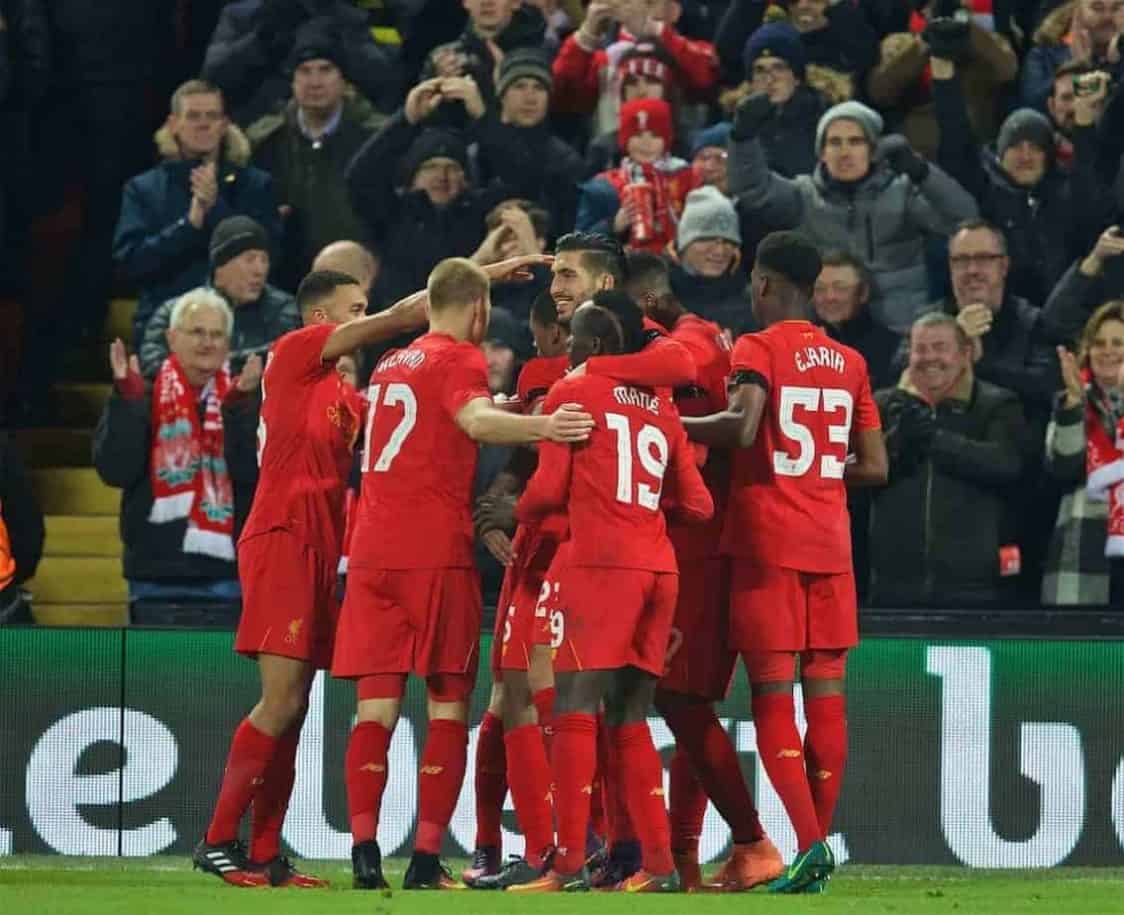 The Belgian returned to the side in place of Loris Karius, and enjoyed a decent evening in general.

He made a big save in either half, and a nice piece of footwork also suggested being out of the team hasn’t affected his confidence.

He did look uncertain from a few corners, flapping at a couple, but if Karius had played like he did, we would be content.

Another highly impressive evening for Alexander-Arnold, who made his second appearance in a Liverpool shirt.

The 18-year-old never looked daunted by the occasion and he showed intelligence, link-up play and a physical edge at right-back.

He sent in a cross that Steven Gerrard would have been proud of to assist Divock Origi for Liverpool’s opener. Very good.

A typically reliable evening for Lucas.

Liverpool’s captain on the night didn’t have the presence of Joel Matip, but he led by example and his effort levels could never be questioned.

One surge into Leeds‘ half after the break was an enjoyable moment.

The Estonian was solid on the whole, but in truth, this was not a night when his credentials were put under the microscope.

A sloppy pass and wayward long-range effort were forgettable moments, but he was a steady head alongside less experienced teammates.

The much-maligned left-back came back in for James Milner and he can be relatively pleased with the impact he made.

His pace and link-up play gave the Reds something different down the left, and his general decision-making and use of the ball was much improved.

One delightful outside-of-the-foot pass was the highlight, but some wayward shooting let him down.

Stewart may be one of the least spectacular players you are likely to see, but with every performance, you see a more mature player.

He kept things ticking over in the middle of the park, showing good positional sense, but he was caught in possession a few times, and nearly cost his side a goal early in the second-half.

It would be nice to see him being slightly more expansive with the ball at his feet.

It was a slight surprise to see Can remain in the starting line-up, but he was one of Liverpool’s most noticeable players from start to finish.

That’s both a good and a bad thing.

The young German was always looking to make things happen in midfield, but he was guilty of being slightly erratic at times. Defensively work better than his attacking play.

Much like Alexander-Arnold, Ejaria is a youngster brimming with confidence, and he looked as though he belonged in the Liverpool side on Tuesday evening.

The 19-year-old looked elegant and unpredictable every time he had the ball, and his delightful pass set-up Wijnaldum for a great first-half chance.

At times he was guilty of being a little too fancy on the ball, but he should be commended for not going into his shell.

After an uncharacteristically poor showing against Sunderland on Saturday, Mane was again below-par against a stubborn Leeds side.

His pace and movement was a threat – over a short distance, in particular, his speed is frightening – but he was sloppy too many times for a key player.

His general touch was off, and he should have squared to Wijnaldum in the second-half, with the Dutchman in space inside the six-yard box.

The 26-year-old was pushed into Philippe Coutinho‘s left-sided role, suggesting Jurgen Klopp could play him there during the Brazilian’s six-week absence.

It wasn’t the most eye-catching performance – it still feels as though he is playing slightly within himself – but he was neat and tidy on the whole.

He forced Marco Silvestri into a brilliant first-half save with a clever effort, and he also hit the post with an angled drive. Adequate.

Having been the Reds’ goalscoring hero on Saturday, Origi played like someone full of self-belief right now.

He looked dangerous every time he had the ball, and one blistering surge down the right in the first-half outlined just how fast and powerful the youngster is.

With 14 minutes remaining, the Belgian pounced ruthlessly from close-range, setting Liverpool on the road to victory.

With a few key attacking players picking up knocks, the next few weeks are likely to see Origi feature prominently – but he himself was carrying a knock in the latter stages.

The 17-year-old nearly scored minutes after coming on as Wijnaldum’s shot almost rebounded to him. But his frustration was short-lived, as he fired home in front of the Kop to write himself into Liverpool’s history books.

A truly memorable moment for Liverpool’s young hopeful – now the Reds’ youngest ever scorer, at 17 years and 45 days.

No time to make an impact against his former club.

Klopp fielded a slightly stronger team than many expected, but it paid off in the end, and he is now close to a third final as Liverpool manager already.

The performance was disjointed for periods, but sometimes that is to be expected when eight changes are made for a game.

The German deserves great credit for blooding Alexander-Arnold, Ejaria and Woodburn, and making them play with such maturity.