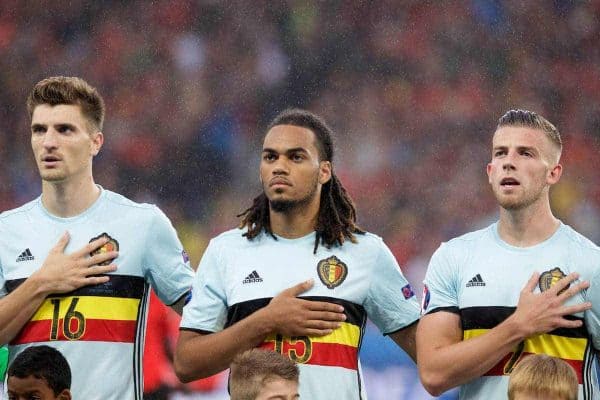 Sunderland defender eager for first win at Anfield in 33 years

Sunderland‘s on-loan centre-back Jason Denayer is keen to help his side break a 33-year dry spell against Liverpool at Anfield.

The Black Cats’ last league win away to the Reds came in 1983, when a Gary Rowell penalty sealed a 1-0 victory for Alan Durban’s side on October 1.

In recent years, Sunderland have endured a perennial battle against relegation, often changing managers mid-season in order to stave off the drop.

Under David Moyes, Denayer is hoping that will change, and with the Wearside outfit having won their last two Premier League games against Bournemouth and Hull City respectively, the Belgium international is confident of breaking Sunderland‘s poor record.

“Anfield is a very nice stadium, but a very difficult place to play,” Denayer said.

“They have only lost one game, at Burnley, and it’s going to be very hard to go there, but we can’t go there with a losing mindset.

“It will be difficult but we never know what can happen in football. Every game is different, we’ll go there positive.

“We want to be able to say ‘we were in the team which won at Liverpool for the first time in 30 years’. It is important we go there and try our best.”

This ultimately stifled their efforts, as the drab atmosphere in February’s 2-2 draw underlined the importance of supporters, with the Reds already hampered by the absence of Jurgen Klopp through illness.

Saturday’s clash is likely to be much different, with the redeveloped Anfield in fine voice so far this season, with Liverpool reflecting this with excellent form on the pitch.

Though Moyes’ side have won their last two games, and the Reds’ last outing was a frustrating 0-0 draw away to Southampton, Klopp will still be confident of sealing victory.

The German should only be without Adam Lallana, with the likes of Philippe Coutinho, Roberto Firmino and Sadio Mane now well-rested, with a week between the two games proving useful.

Nevertheless, they must be wary of complacency against a Sunderland side with extra motivation to push for the three points.