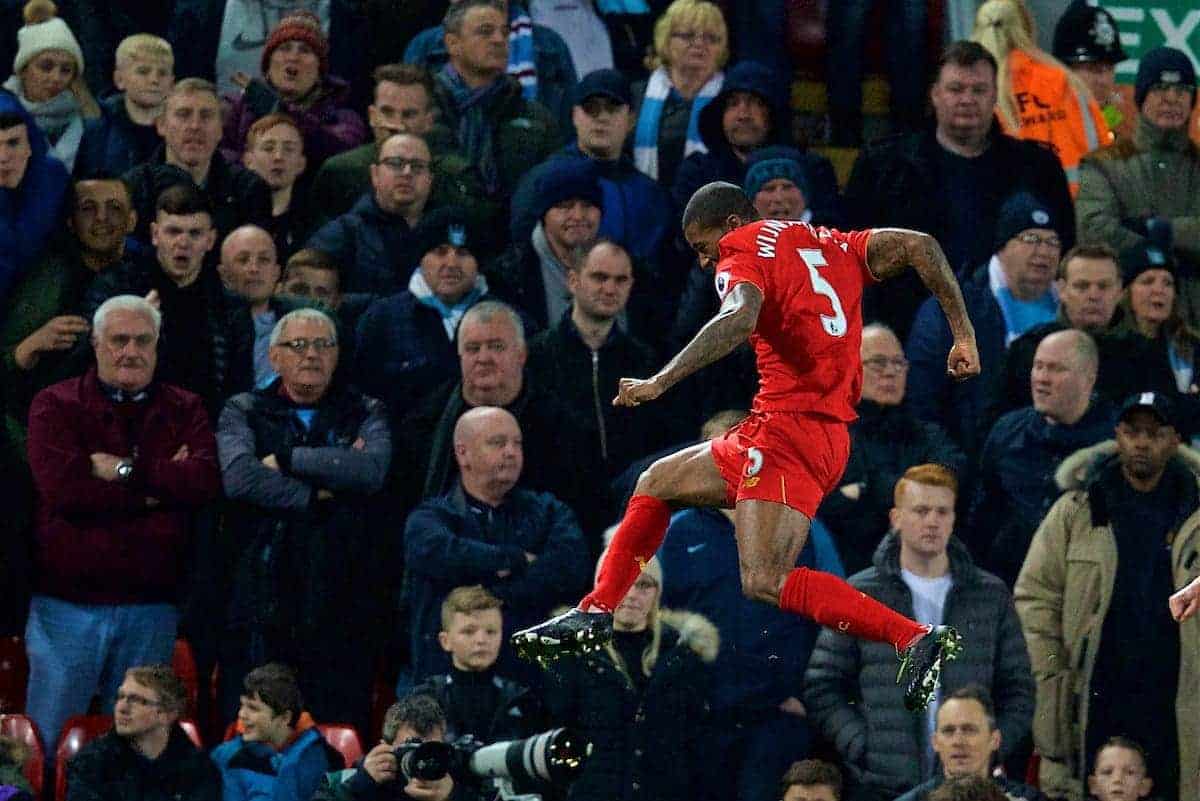 An early Georginio Wijnaldum header proved the match-winner a 1-0 victory for Liverpool at home to title rivals Manchester City on New Year’s Eve.

Liverpool rounded off an impressive 2016 by welcoming City to Anfield on New Year’s Eve, in arguably their most important clash of the season so far.

Heading into the fixture nine points behind leaders Chelsea, but a point ahead of third-placed City, the Reds needed to secure a victory or risk falling behind in the Premier League title race.

Jurgen Klopp was dealt a blow by the continued absence of Joel Matip and Philippe Coutinho through ankle injuries, but the home side were boosted by three consecutive wins over Middlesbrough, Everton and Stoke City.

During their time in the Bundesliga, Pep Guardiola had a slight edge over Klopp, leading Bayern Munich to four victories over Borussia Dortmund, but it was the German who had the last laugh. With both defences starting the game in shaky form, as Ragnar Klavan picked up an early yellow card and Claudio Bravo once again struggled with his delivery, the opening goal was there for the taking.

It came for Liverpool, and came from an excellent forward play, with Adam Lallana, operating in a more advanced role on the left, curling a cross in for Wijnaldum to power home with the header.

This fired up the Anfield crowd, and also Klopp’s side, who buzzed around the midfield, chasing after loose balls and pressing City into mistakes whenever possible.

City continued to struggle at the back, and both Roberto Firmino and Emre Can had good opportunities to add a second, but were unable to test Bravo after some great passing play from the Reds.

The tempo dropped slightly as the half came to a close, though Lallana almost had a clear chance with him and Firmino on the break, but the England international was caught offside, with Craig Pawson calling for half-time shortly after. Liverpool kept up the pressure immediately after the interval, with Nathaniel Clyne finding himself in a great position at the back post early on, but the right-back was unable to get the shot off from close range.

City did have a handful of chances approaching the hour, however, with both Sergio Aguero and David Silva firing shots at Simon Mignolet‘s goal, with the latter coming closest with his low sweeping effort.

Klopp was forced into a change just after the 60-minute mark, with Jordan Henderson inching off, but the German made sure it was a positive one, sending on Divock Origi.

This saw Liverpool take up a more counter-attacking approach, and though it took time Origi to find his feet alongside Firmino and Sadio Mane, his pace added a much-needed new dimension in the final third.

Opportunities were few and far between for either side, however, and Klopp’s move to introduce Lucas Leiva in the 90th minute saw the German look to see out the game for a 1-0 victory.

Though it remained fraught in the closing stages at Anfield, the Reds held on successfully, taking another priceless three points. Happy New Year!