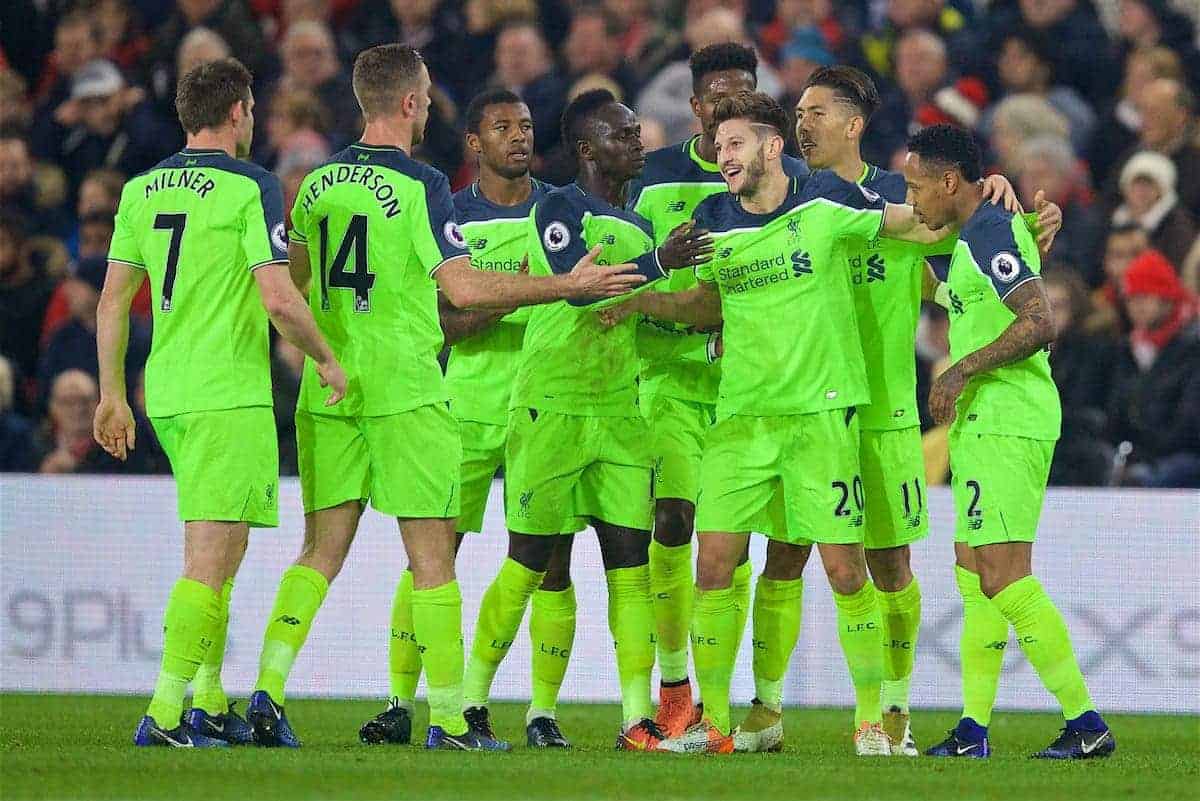 A fine team performance, capped by a host of excellent individual displays, saw Liverpool to a 3-0 victory at Middlesbrough on Wednesday night.

All eyes were on Mignolet after the Belgian replaced Loris Karius between the sticks following 10 league games on the bench, and he responded with a strong, dominant performance at the Riverside.

Mignolet made three important saves in the first half, most notably denying Viktor Fischer at his near post, before enjoying a much quieter 45 minutes after the break in a fine overall display.

Listless going forward in Sunday’s 2-2 draw with West Ham United, Liverpool needed a more productive attacking contribution from Clyne against a robust Middlesbrough defence, and the 24-year-old certainly managed that.

Finding himself in space on the right as the half-hour mark struck, Clyne delivered an inch-perfect cross for Adam Lallana to head home, capping an strong showing all round.

Lovren shook off a minor hamstring injury to take his place at centre-back, and despite missing his regular partner, Joel Matip, the Croatian looked relatively comfortable in his defensive duties.

His long passes in the second half set the tone early on as Jurgen Klopp changed his approach, though it was his partner in crime, Ragnar Klavan, who provided the more measured outlet.

Klavan made his first league start since the 5-1 victory at home to Hull City on September 24, and produced a polished showing, adding some much-needed composure to the same back four from August’s 2-0 defeat to Burnley.

The Estonian Player of the Year has hardly put a foot wrong since his £4.2 million move from Augsburg in the summer and, at 31, his experience looks to be a valuable quality at the back.

Coming up against a serious threat in the pacy Adama Traore, Milner’s experience was tested in his left-back role, looking to take up a physical approach whenever possible, conceding defeat in the footrace.

The vice-captain should be commended for how he dealt with the former Barcelona winger, while he was still able to surge forward whenever possible, displaying his exceptional fitness.

Less eye-catching than his compatriot, Lallana, Henderson performed his basic duties as Klopp’s No. 6 to a high standard, breaking up play and moving the forward sharply.

There was a hesitance to his game at stages, but overall Henderson kept up the tempo as Liverpool’s deep-lying metronome.

Arguably Liverpool’s most consistent player of the season, Lallana notched his fifth goal of the campaign with an emphatic header on 30 minutes, handing his side the initiative.

The England international then laid on Divock Origi‘s strike on the hour mark, before adding another of his own with a sweeping finish to put the Reds 3-0 up and seal a vital three points.

While Lallana has grabbed the headlines for his improved goalscoring this season so far, Wijnaldum has performed with intelligence and nuance, providing a subtle influence in the midfield.

His quick one-touch play was central to Liverpool scoring their second of the night, combining with Sadio Mane to open up space for Origi to drive forward and fire past a hapless Victor Valdes. Up against former Manchester United left-back Fabio, Mane was primed for a dominant evening, and having returned to solid form of late, his fluid movement proved a real threat for Middlesbrough.

Mane hit the post with a low effort in the first half, but more impressive was the Senegalese’s interplay after the break, playing a key role in goals for Lallana and Origi.

Despite concerns over his efficiency away from the No. 9 role, Firmino continued his residency on the left of Klopp’s three-man forward line, serving as a de facto replacement for Philippe Coutinho.

The Brazilian toiled away out wide, and combined well with the likes of Lallana and Mane, but he was still much more influential when able to drift inside to take up a central position.

Making his 50th appearance for the Reds since signing in a £10 million deal in 2014, Origi made his mark by notching his 17th goal for the club on the hour mark—his fifth in a row this winter.

He then laid on Lallana’s strike, and Liverpool’s third, to help secure the victory, with his industry and the timing of his runs off the shoulder of Middlesbrough‘s defence improving throughout the game. Ovie Ejaria (on for Wijnaldum, 87′) – N/A – Given further experience in the Premier League but, like Lucas, had no time to influence the game.

Klopp made a big call in dropping Karius and bringing in Mignolet, but was rewarded with a strong, confident display from his backup goalkeeper, while keeping his No. 1 away from scrutiny.

Forced to name a substitutes’ bench with an average age of just 21.7, including three teenagers, Klopp was left to ensure Liverpool maintain dominance through tactical tweaks.

This saw him alter his side’s approach to be more direct in the second half, and it paid off, with Middlesbrough unable to cope with Liverpool’s overwhelming attacking play.

As a result, Klopp was able to introduce both Alexander-Arnold and Ejaria, though he will no doubt be more content with the three points, after a brutal run of results.