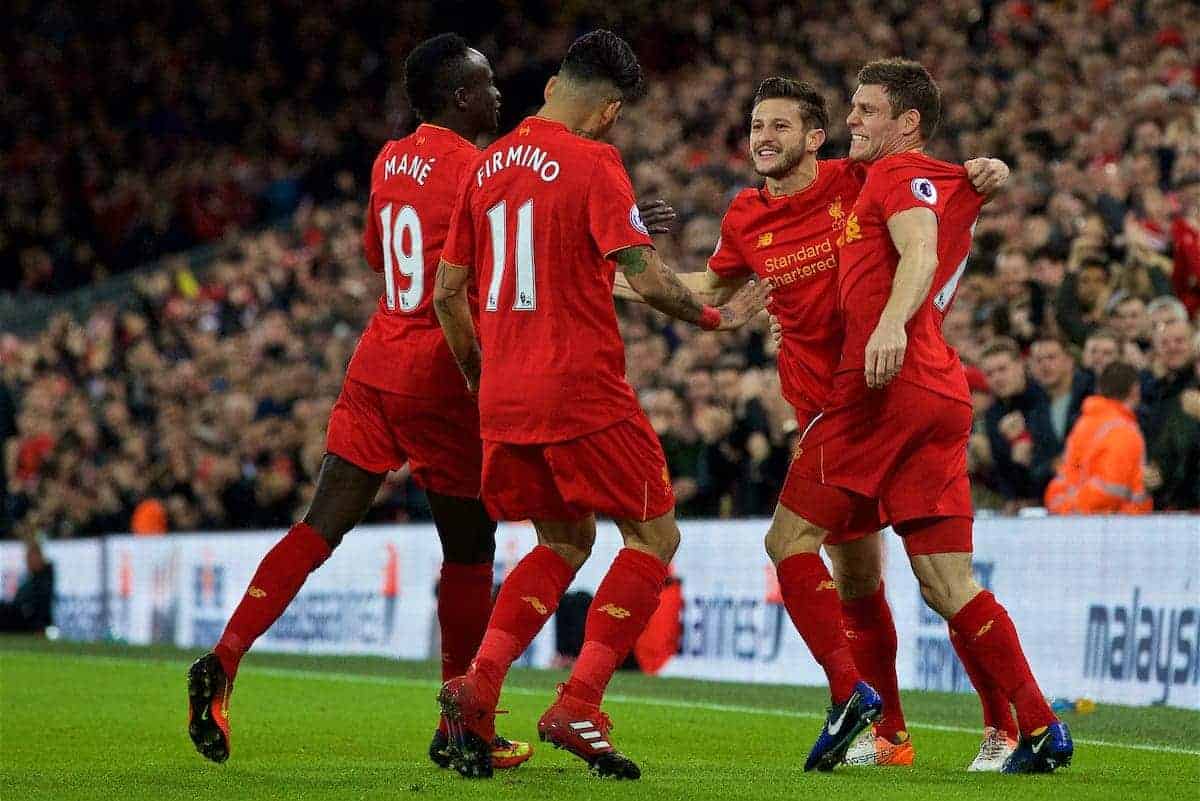 Liverpool take on Middlesbrough at the Riverside Stadium on Wednesday evening, as they look to get back to winning ways in the Premier League.

We’ve reached a vital period in the season, as title chances show signs of disappearing for the first time.

Sunday’s 2-2 draw at home to West Ham was another disappointing result, with yet more individual errors proving costly.

It’s now just one win in four league games for Liverpool, and with leaders Chelsea looking very strong and six points ahead of them, a winning run is required.

Jurgen Klopp‘s side visit Middlesbrough, which has the potential to be another awkward night at the office.

The Reds have a dreadful record at the Riverside Stadium – having not won on their last seven visits – and if that run continues this week, the swell of negativity will only grow.

There is no reason why Liverpool shouldn’t win, however, with their 16th-placed opponents enduring an up-and-down campaign to date.

Champions wins matches such as these, and the Reds should prevail. We spoke to Bradley Hunt, a lifelong Middlesbrough supporter and season-ticket holder, to get his thoughts on the game.

How happy are you with Boro’s start to the season? A mid-table finish possible?

If I’m honest, I’m rather disappointed with our position in the league as we’ve been playing better than our points tally suggests.

We started well and then struggled throughout September, losing three on the spin, but since then we’ve recovered—taking points at West Ham, Arsenal and Man City.

Our home form, which was the foundation of our success in the Championship last year, has also picked up, with us beating Bournemouth and Hull. I remain optimistic.

As a newly promoted club, I’d take 17th if you offered me it now, but having followed Boro home and away for many years, I’m quietly confident of finishing mid-table.

Who have been your standout players so far, and who should we be afraid of going into the game?

Ramirez is the player who has the ability to pull something out of nowhere. He’s our Philippe Coutinho. Although inconsistent, when Ramirez is on form we create chances the likes of Alvaro Negredo, Jordan Rhodes and Cristhian Stuani score.

Forshaw has been a bit of a revelation in the Premier League. Struggling to break into our midfield last year due to the Adam Clayton and Grant Leadbitter partnership, Forshaw took his chance when Leadbitter and Marten de Roon were injured at the beginning of the season.

He’s got good feet, an engine and is an ex-Toffee so expect a performance from him.

Gibson is already one of the best English centre-backs in the Premier League and has been overlooked for years due to playing in the Championship with his local team.

It’s good to see he’s starting to get the recognition he warrants and I expect Mr Southgate to give him his first senior call-up in early 2017.

What do you make of Jurgen Klopp‘s Liverpool? In the title race or drifting out of it?

Liverpool this year have been brilliant to watch. If you asked me two weeks ago I would have said they’re in the title race, but now I’m unconvinced.

With Coutinho injured and results stuttering, I think Wednesday’s game is enormous for Liverpool. Fail to win and the team start to doubt whether they are capable of coping without Coutinho, which is a disaster heading into the Christmas period.

While the majority of fans will write Liverpool’s title hopes off this year, I will never bet against a Jurgen Klopp team.

How do you expect Wednesday’s match to pan out? Hit me with a prediction.

With Coutinho out injured, Loris Karius struggling for form and Boro benefiting from a raucous sell-out Riverside, I predict an open game with plenty of goals.

Ramirez and Negredo are expected to return to the starting lineup, and with Boro having a history of beating ‘the big four’ at home, I’m going for 3-1 win, with Negredo to break the deadlock. Back in September 2014, the two sides met at Anfield in the League Cup third round. It proved to be a memorable evening full of drama.

Jordan Rossiter scored brilliantly from long range on his Liverpool debut, only for Adam Reach to level matters in the second half.

Suso’s extra-time goal looked to have sent Brendan Rodgers’ Reds through, but Patrick Bamford’s last-gasp penalty took the tie to a shootout.

After a remarkable number of spot-kicks, Liverpool eventually prevailed 14-13, with Albert Adomah missing the decisive penalty.

The last meeting in the Premier League came in February 2009, when Boro’s 2-0 win put a huge dent in Liverpool’s title hopes.

Xabi Alonso scored an own goal and Tuncay Sanli added another, on a dark day for Rafa Benitez and his team.

Klopp looks likely to be without Emre Can for the trip to the Riverside, with the 22-year-old still struggling with a minor knee injury.

Dejan Lovren is also a doubt, having been replaced at half-time against West Ham after suffering a bad bout of cramp.

It means either Ragnar Klavan or Lucas Leiva would come in for the Croatian, with the former getting the nod on Sunday.

Philippe Coutinho remains on the sidelines, but hopes to be back for the clash with Man City on New Year’s Eve, and Daniel Sturridge is another who is still out.

Aitor Karanka has no real injury concerns, which is always something of a godsend at this time of year.

George Friend could miss out at left-back, but Gaston Ramirez and Alvaro Negredo are expected to be fit, having not featured in the 1-0 defeat at Southampton on Sunday.

“The pundits are former players who forgot completely how it felt when they got criticised.

“Especially the Neville brothers. I have to say the one who was the manager, he obviously should know that too much criticism never helps.

“But he’s not interested in helping a Liverpool player I can imagine, but that makes the things he says not more sensible.

“He showed he struggled with a job to judge players, why do we let them talk about players on television? The only thing I can do is not listen to them.

“I’m sure Carra doesn’t speak too positively about United players and obviously the Neville brothers don’t like Liverpool.

“If they can cause bigger problems than we already have, I think they’ll try it—that’s all. Now you have your headline!

“You can tell [Neville] I’m not on Twitter, so if he wants to tell me something, Twitter doesn’t help.”

One to Watch: Gaston Ramirez

Ramirez was a reported transfer target for Liverpool earlier in the decade, but a move to Anfield never materialised for the Uruguayan.

Having failed to fully convince at Southampton, Ramirez eventually joined Middlesbrough permanently in the summer, having enjoyed a productive loan spell with them in the Championship last season.

He has taken that form with him into the Premier League, where he has often been the man to unlock opposition defences. One superb solo effort at home to Bournemouth remains a contender for goal of the season.

The 26-year-old can be a little inconsistent at times, but he is a clever player with the ability to hurt Liverpool on Wednesday.

The match isn’t live on UK television, but This is Anfield will be running the matchday live blog as always. Be sure to keep up to date with the action from 7pm.