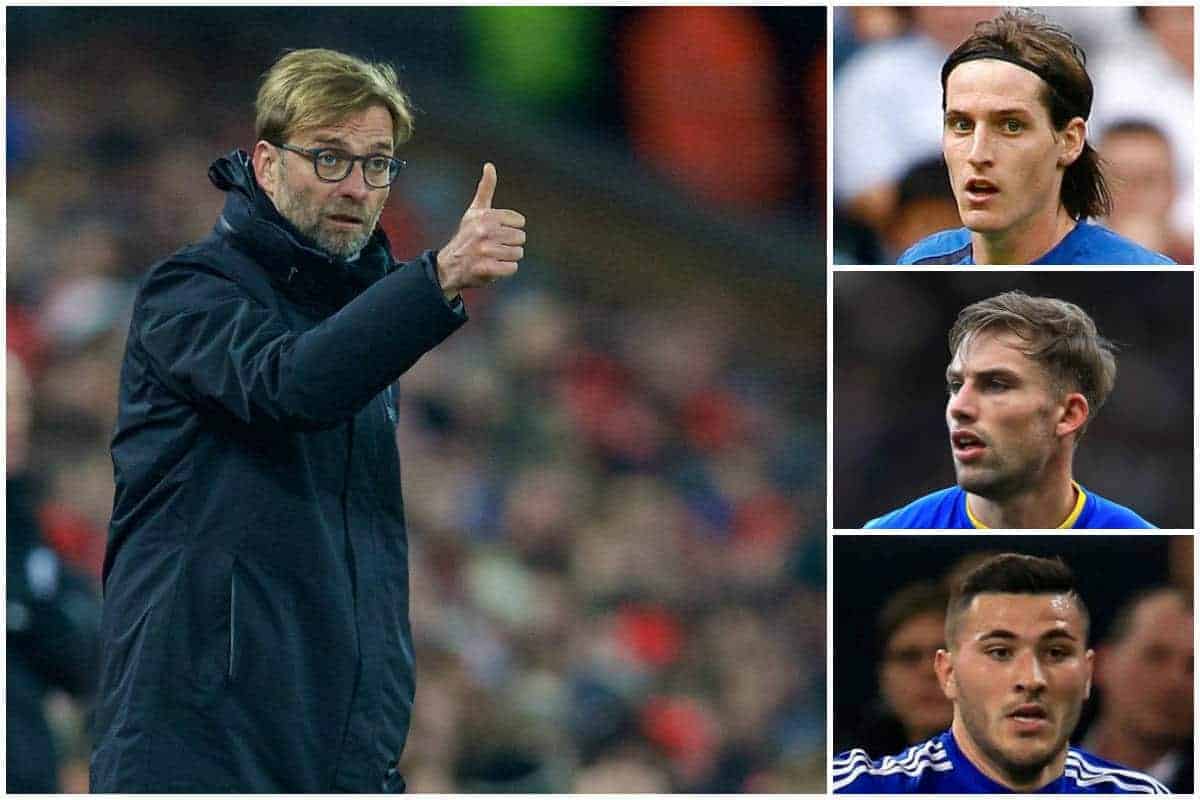 Having already utilised the free-agent market to bolster his Liverpool squad, Jurgen Klopp has a variety of other options this January.

Klopp is now free to approach players in the final six months of their current contracts, to discuss terms on a possible switch to Merseyside.

During his time with the Reds, this has already been the case with Joel Matip, with the Cameroonian centre-back finalising his move to Liverpool in February.

Klopp’s squad are in relatively good shape at the beginning of 2017, but there remain areas that would benefit from reinforcement, either immediately or in the long term.

Here are five soon-to-be free agents Klopp could consider this January, including a young left-back solution.

If Klopp is looking to sign a left-back with experience of English football, Leeds‘ 6’1″ talent Taylor would be a promising option.

Despite a period of sustained instability at Elland Road, Taylor has shone with his all-round prowess in what is proving to be an increasingly important role at every level.

He is a diligent defensive prospect, with an intelligent reading of the game, as well as a useful outlet pushing forward, able to drive past players and into the final third, where he can make use of his impressive crossing ability.

With James Milner currently established as first-choice left-back, the addition of a younger deputy could allow Klopp to oversee a transition in the years to come.

Taylor submitted a transfer request in the summer in a bid to force a move away from Leeds, but this was rejected, and with Garry Monk’s side insistent on keeping him until his contract expires, Liverpool have time to mull over a deal.

Clichy was linked with a switch to Liverpool before he joined City in 2011, but he ultimately opted to move to the Etihad Stadium. Though past his prime at 31, he would add further experience to Klopp’s full-back ranks.

There are options around Europe that would provide Klopp with a more proven left-back, with Schalke 04’s Bosnia and Herzegovina international Kolasinac a blend of youth and experience.

Kolasinac is a tough-tackling full-back who is capable of performing in a variety of roles up the left flank, and has recently been filling in as a wing-back in Markus Weinzierl’s 3-5-2 formation.

The No. 6, who has been with Schalke since 2011, already has four seasons of Bundesliga football to his name, though an ACL injury suffered at the beginning of 2014/15 hampered his progress in that campaign.

He has shown no ill effects after recovery, however, still boasting the same energy, tenacity and attacking adventure at left-back, providing Schalke with a useful outlet at both ends of the pitch.

Kolasinac is open to contract talks at the Veltins-Arena, but has been linked with a move to Merseyside already this season, and could look to follow Matip to Liverpool in 2017.

Costa returned from injury to take on Liverpool in last season’s Europa League quarter-finals, and was one of Villarreal’s most impressive players despite a 3-1 aggregate defeat, continuing the excellent form he has shown in recent seasons. Like Kolasinac, Rudy is another player from the Bundesliga that may appeal to Klopp, and could continue to bulk out his options in the middle of the park.

While the Germany international is adept in a variety of roles, including full-back and as a box-to-box midfielder, it is Jordan Henderson‘s duty as Liverpool’s No. 6 that Rudy could arrive to reinforce.

Klopp currently has Kevin Stewart and Lucas Leiva as backup options for Henderson, and while Emre Can is able to deputise there, the 49-year-old seemingly prefers him as a roving No. 8.

With Stewart unfavoured of late, and Lucas linked with a move to Inter Milan, Rudy could step in to provide a more experienced backup for Reds captain Henderson.

His versatility would make him a great value signing, but with Bayern Munich heavily linked, it may be difficult to prise him from the Rhein-Neckar-Arena.

Despite his excellent progress with FC Astana since his arrival in 2015, and a nomination for the coveted European Golden Boy award in the same year, Maksimovic has flown under the radar in Kazakhstan.

A versatile midfield talent, Maksimovic came through the youth ranks at Red Star Belgrade alongside Marko Grujic, but while the latter progressed into the first-team setup in 2013, the former left on the expiry of his contract.

Three moves later, and Maksimovic is a regular in Stanimir Stoilov’s side, typically playing as a defensive midfielder, but occasionally in a more advanced, attacking role.

Astana will no doubt be loathe to see Maksimovic, a three-cap Serbia international, leave, but given his reputation on the continent, he seems primed to join a more high-profile club in the summer.

Like Rudy, Maksimovic could provide cover in a variety of roles at Liverpool, but still just 21, his youth could see him blossom further, along with Grujic, into a key role in the future.

Injury to Philippe Coutinho, Daniel Sturridge and Danny Ings this winter has highlighted how, despite Klopp’s best-laid plans, the squad can be diminished at a swift, unavoidable rate.

The German has suggested he will look to peruse the January market to add to his attacking ranks, but if he decides to hold off until the summer, Rennes forward Ntep would be a fine, low-cost option.

Ntep has been linked with a move to Liverpool in the past, but it is lowly Swansea City who are mooted as suitors in the winter window, with the south Wales side eyeing a bargain.

After scoring nine goals and assisting a further seven in 38 Ligue 1 games in 2014/15, Ntep struggled with injury throughout the last campaign, but is now back fit and looking to make up for lost time.

A swift, creative forward, most comfortable on the left flank, Ntep could provide long-term cover for the likes of Coutinho and Sadio Mane, allowing Klopp to further flesh out his ranks.

Berahino has certainly hit a difficult point in his career, and runs the risk of stagnating at the Hawthorns, after being denied a big-money move to Tottenham Hotspur at the beginning of 2016.

He’d be a risky signing, but he is certainly a talented young forward.