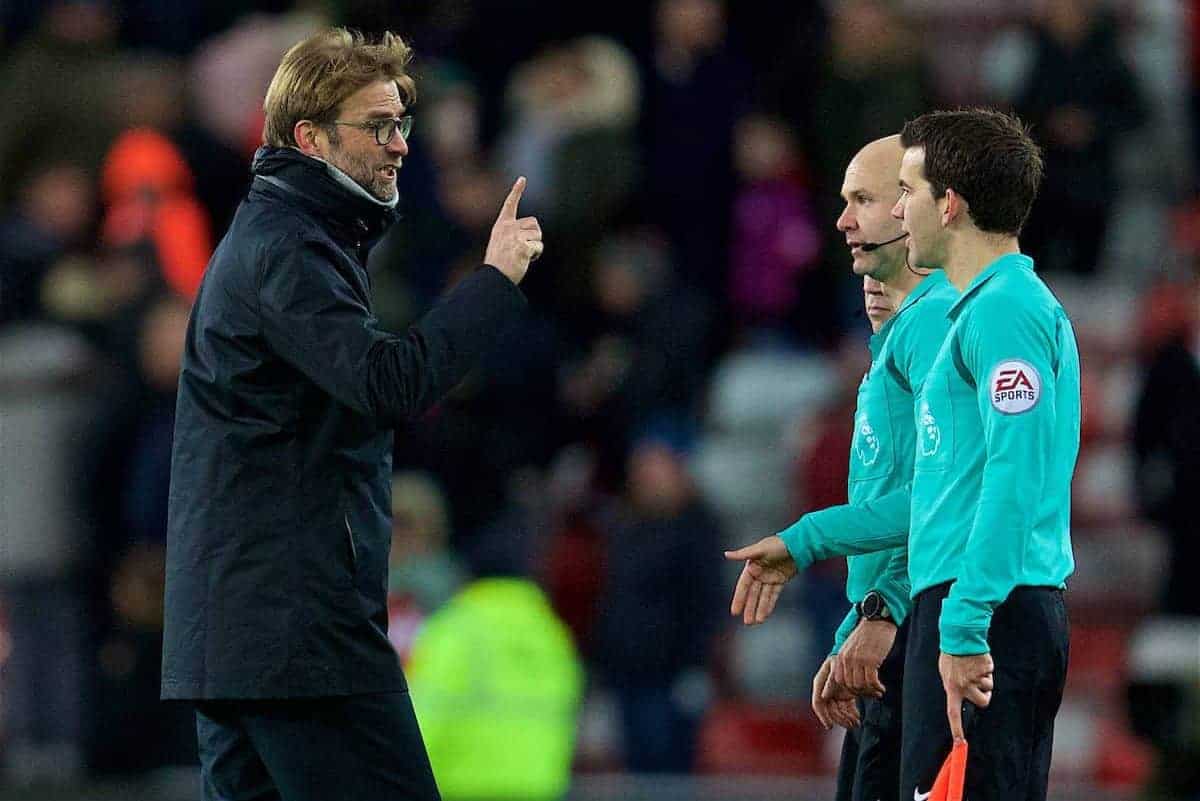 A grumpy Jurgen Klopp apologised for his mood after seeing Liverpool twice squander the lead to draw at Sunderland as Jermain Defoe struck twice from the penalty spot.

The Reds boss accepted that referee Anthony Taylor had got both spot-kick decisions right, but insisted the free-kick which led to the second six minutes from time should not have been awarded.

Klopp said: “We scored the second goal, felt good, [it] felt deserved, then I would say no foul, but a free-kick. I have seen it again and there was no contact. Then handball, 2-2, that’s how it is.

“I must be honest, it doesn’t feel good and it’s not because of the point, it’s because two penalties in a game… Usually what you have to do to get a penalty, to get two, that was harsh, very hard to accept.

“But obviously I have to accept it, so I will do it.”

Klopp’s disappointment at a result which ended a four-game Premier League winning streak was compounded by the fact that he believed his side should have been awarded a free-kick on the edge of the Sunderland penalty area seconds before the home side broke and Defoe went to ground to earn the set-piece which led to the second equaliser.

He said: “It was for sure a 100 per cent foul on Daniel Sturridge. It was a similar situation, the 18-yard box, a free-kick. We would have had a chance to shoot the ball against somebody’s arm.

“The decision was not the worst mistake in the world – I don’t want to say this – that’s why it feels so hard.”

Sturridge, who later limped off with an ankle injury which Klopp believes is not serious, had headed the visitors into a 20th-minute lead, but Defoe levelled from the spot within five minutes after Ragnar Klavan had felled Didier Ndong.

Sadio Mane restored Liverpool’s advantage with 18 minutes remaining, but then conceded a second penalty when he blocked Sebastian Larsson’s free-kick with his arm, with Defoe obliging once again.

Black Cats boss David Moyes could not resist a barbed comment in Klopp’s direction after the German had criticised Sunderland‘s defensive approach in the reverse fixture at Anfield in November.

Moyes said: “Maybe if I was a German manager, you might praise that, actually. If I had been German, you might have been saying, ‘Great, you’re doing something different’.”

Responding to Klopp’s complaint about the late free-kick, he added: “Look, I think things go against you. You should see what it’s like at the bottom of the league. I could have been in here shouting there was another handball.

“I thought we did well, stuck at it, stuck up against Liverpool as much as we could and tried to make it hard for them, and played well as well.”

The Black Cats remain inside the relegation zone and are set to lose Lamine Kone, Ndong and Wahbi Khazri to the African Nations Cup amid an injury crisis.

With funds to strengthen this months limited, Moyes faces a tough second half of the season.

“If that changes in January, then we’ll all get a surprise and you will as well. I hope that it could alter, but at the moment I will go with the standard line that we have got at the moment.”

QUIZ: How well do you know Liverpool FC kits?

QUIZ: How well do you know Liverpool FC kits?

Mo’s abs, superb saves and rondos are back – Inside Liverpool FC’s return to group training