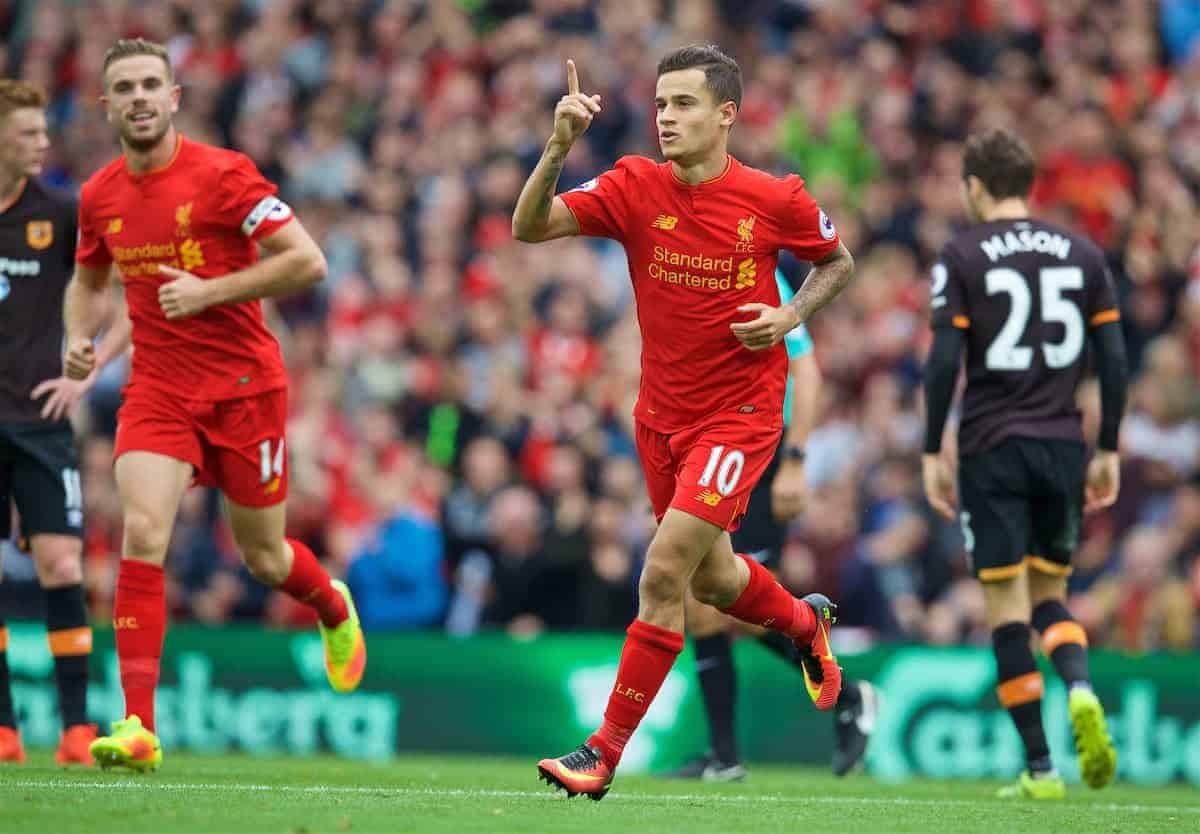 Jurgen Klopp is set to restore Philippe Coutinho to the starting lineup, but faces a big call over who leads the attack as Liverpool take on Man United.

The Reds arrive for the biggest game of English football’s calendar on Sunday, looking to secure their first win of 2017 to keep their title charge on track.

Liverpool come into the grudge match on their longest winless run this season, but the Reds must put recent struggles behind them to “strike back” as Klopp has called for, against a United side on a nine-game winning streak.

A much-improved performance from Wednesday’s loss at Southampton will be needed, and Liverpool have been boosted by the potential returns of Joel Matip and Jordan Henderson—as well as Coutinho, who is in line for a starting role. Klopp’s final selection will ultimately hinge on the availability of key players Matip, Henderson and Coutinho.

However, that the Cameroonian hasn’t featured since mid-December and has only just returned to training with Henderson could force Klopp into leaving out the duo.

Coutinho seems the likely starter of the trio, having enjoyed a productive half-hour cameo at Southampton, and he could make a timely return to the left of attack, replacing compatriot Lucas Leiva in the XI.

Coutinho’s comeback would allow Lallana to return to his influential attacking-midfield slot to form the three-man centre with Wijnaldum and Can, who would drop into defensive midfield.

Deploying Coutinho from the left and Firmino the right would leave Klopp with a big decision on whether Origi or Sturridge leads attack.

But Sturridge’s lethargic display at St Mary’s could see the Belgian preferred for his willing running and power, and with Mignolet replacing Karius behind an unchanged defence, the Reds would look like this: When asked on availability of key players in his pre-match press conference, Klopp said “we have to wait for any reaction [to training] before we make decisions.”

One thing for sure is that he will be desperate to include them if possible.

Matip seems set for a place on the bench at most after a lengthy layoff, but Henderson has only missed two games he would have played in, meaning his match fitness won’t have been affected too much—which could see him reintroduced alongside Coutinho.

If fit to feature Henderson will return to defensive midfield, and if Can and Wijnaldum are deployed alongside the skipper, Klopp will have greater flexibility with his offensive selection.

But Sturridge’s uninspiring midweek outing, and Klopp’s preference for Firmino to lead in big away games, could see the hard-working Brazilian start up top.

Firmino could then be flanked by Lallana and Coutinho to reform the high-energy and free-foaming attack that inspired wins at Man City and Chelsea last season, and that would see Liverpool lineup with this XI: The Reds arrive at Old Trafford in a testing moment, but it is crucial Klopp’s side regroup and rediscover their winning form to emerge with what would be a huge three points.