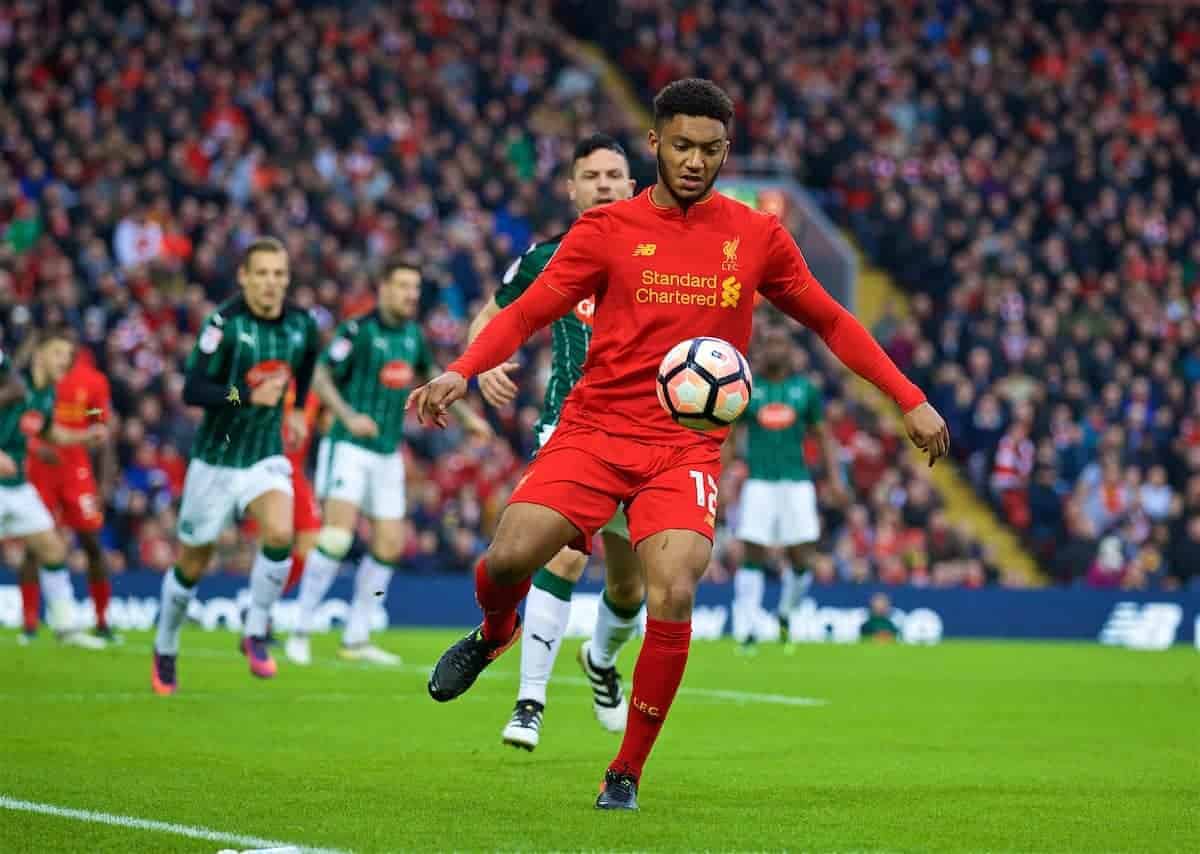 Joe Gomez couldn’t hide his happiness at being back in the Liverpool side against Plymouth Argyle, following his injury nightmare.

The 19-year-old was named the Reds’ starting lineup for the visit of the Pilgrims on Sunday—his first appearance since October 2015, against FC Sion.

Although Liverpool could only draw 0-0 in their FA Cup third-round clash, seeing Gomez back on the pitch was a huge positive.

The young defender admitted he is delighted to be back, but that he must continue to kick on and not rest on his laurels.

“It meant a lot to me after being out for such a long time, it’s something I dreamt of,” Gomez told LiverpoolFC.com.

“But the main thing was the result and we’ve got to try to get that in the [replay]. For me, it was nice to be back playing at Anfield.

“Coming back out to that crowd at Anfield was something in the back of my mind the whole time.

“It was important for me to get back to this point but now [I need to] keep pushing on and try to get back playing and [be] regularly involved.

“It was a big moment for me to be back involved again but it’s about pushing forward and [to] keep learning.”

Gomez also spoke about the disappointment of the result against Plymouth, but was bullish about the Reds doing the business in the replay later this month.

“I think it was a difficult one,” he added.

“We defended well, kept solid at the back and played as a team but, obviously, it was a young side for us and we weren’t able to break them down.

“Everyone will go again and we keep moving forward. It’s hard because teams are going to come here and try to sit off and try to defend.

“It’s hard for us to break them down and it’s harder when you don’t do it early doors and get the goal early on.

“We stayed switched on and tried to do it but we move onto the next game and try to take the positives.

“Everyone’s eager and hungry to play—that’s one of the positives of having a young team.

“I think everyone will learn from this game and we hope we’ll be able to come back in and try to get the result.”

Although Gomez was largely a spectator in an incredibly one-sided game at Anfield, there is a class about him that stood out from the rest.

Physically, he doesn’t seem to have been hampered by the ACL injury that kept him out of action for over a year, and he possesses real quality on the ball.

Jurgen Klopp, who Gomez described as “a top-class manager”, is clearly a big admirer of the centre-back, and it wouldn’t be a shock to see him feature more prominently between now and May.