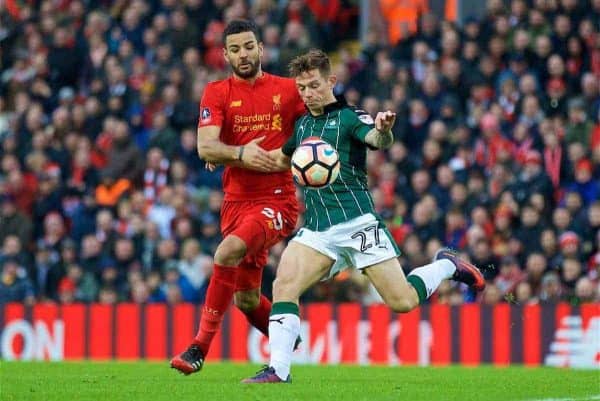 “Last thing we needed,” “January will be tougher” – Fans react to 0-0 draw against Plymouth

Liverpool’s youthful side weren’t able to breakdown Plymouth Argyle as they were held to a disappointing 0-0 draw at Anfield.

Gomez made his return after a 15-month absence, playing as a right centre half while Ojo made his first start since October 2015 as part of an attacking three.

Liverpool dominated the first half as Plymouth sat back and invited pressure but the young guns couldn’t break them down and the two teams went into the break level.

Despite having 80% of the possession, Liverpool needed a spark and Klopp turned to Daniel Sturridge, Roberto Firmino and Adam Lallana in the later stages.

However, the star trio weren’t able to produce a goal and Liverpool had to settle for a disappointing 0-0 draw despite a dominant performance.

Here are all the best reactions from fans on social media throughout the game:

Youngest ever #LFC team today. Great to see Gomez & Ojo back in first team action. First ever start for Woodburn as well.

It's so nice to see Joe Gomez back in an #LFC shirt and playing again. Another defensive option right there. #FA #Cup

Its great to see Joe Gomez back. Woodburn and Ejaria both looked bright in the 1st half. Our final ball has been letting us down so far #LFC

How composed has Joe Gomez looked that half? Like he's never been away. #LFC

Sturridge, Firmino and Lallana all came on and fans hoped they’d provide a spark…

Just give Sturridge the ball and let him shoot !! #LFC

Sturridge, Lallana & Firmino all on as Liverpool try to snatch victory but if anything Plymouth looking dangerous on the break #LFC #PAFC

If LFC get through to 4th round. They'll have had to play 10 games in 34 days leading up to the showdown with Chelsea at Anfield

Really tough game for Liverpool, and just makes January so much tougher without Sadio Mane, but should be a cakewalk in Devon.

Scoring a worldie in training has gone to his head, it seems. A game to learn from; good young players constantly making wrong decisions. https://t.co/uI49BRi66Q

FT 0-0. Too slow, lacking in ideas and now another game in this already packed month of football.

That did not go well for Liverpool Football Club.

Just had one of those feelings that it would be like this. Well done to Plymouth for getting a replay! https://t.co/q5t08M4OlD

Oh well. That was disappointing. Well played Plymouth though.