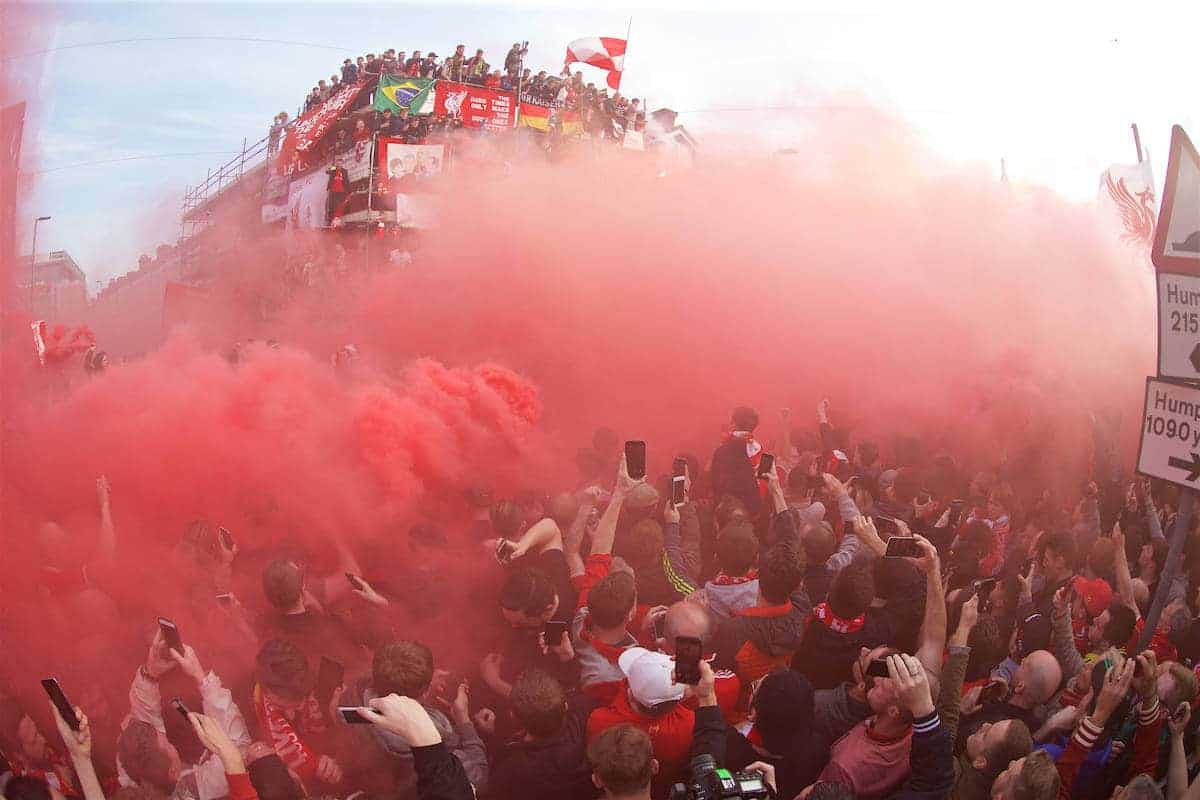 With 2016 coming to a close, we take a look back at Liverpool’s 10 standout moments over the last 12 months – there have been some memorable ones to choose from.

Another year, another intriguing period in Liverpool FC’s great history.

These last 12 months may not have always been plain sailing, but under the wonderful management of Jurgen Klopp, the Reds reached two cup finals and currently sit second in the Premier League table.

This is a team very much going places with Klopp at the helm, and future trophy success is surely now a case of when, rather than if.

Liverpool have enjoyed some fabulous moments in 2016, but what have been the 10 best? Here’s our countdown – do you agree?

If you don’t like Kolo Toure, there must be something wrong with you.

The veteran Ivorian may have been past his best by the time he joined Liverpool in 2013, but he still proved to be a very well-liked figure at the club.

When the Reds took on Aston Villa on Valentine’s Day, Toure was still searching for his first goal for the club, but he ended that drought in thrilling fashion at Villa Park.

Klopp’s side were 5-0 up and romping to victory, before Toure met Jordan Henderson‘s corner perfectly with his head, steering his effort into the net.

The joy on the defender’s face was so genuine, and the reaction of his teammates told you all you needed to know about his popularity. Liverpool supporters were spoiled in the 1970s and 1980s when it came to reaching endless cup finals and lifting trophies.

It has been a different story in the 21st century, though, so qualifying for the Europa League final against Sevilla was a first European final since 2007.

The Reds traveled in huge numbers to the small Swiss city of Basel, completely taking over the city for the days leading up to the game – leaving locals in awe at the sea of red on matchday. The atmosphere was excellent and buoyant.

Similarly, the welcome the players received on the streets outside Anfield for the Borussia Dortmund and Villarreal games were incredible, and will never be forgotten.

The Reds may have lost 3-1 to Sevilla, on a depressing night, but Liverpool’s support showed exactly why this club is so unique.

It has been yet another stellar 12 months for Liverpool’s star man Philippe Coutinho, and he broke the hearts of Man United fans back in March.

The Reds had been drawn against their most bitter rivals in Europe for the first time ever, in the Europa League last-16, and Liverpool cruised to a 2-0 win in the first-leg at Anfield.

Klopp’s men started to wobble 1-0 down in the return fixture, however, before Coutinho decided to show the world what a special footballer he is on the stroke of half-time.

Making mincemeat of young full-back Guillermo Varela down the left, the Brazilian found himself up against the seemingly unbeatable David de Gea, before dinking an outrageous finish past the United goalkeeper.

It effectively ended the tie as a contest, and the away fans had Coutinho to thank for a laid-back second-half at Old Trafford.

The completion of Anfield’s new-look Main Stand was a big talking point over the summer, amid much excitement at its unveiling.

Supporters weren’t to be left disappointed, and its first game in use, against Leicester City in September, was a spectacular occasion – with Anfield’s highest attendance since 1977.

The magnificent structure has given Anfield an even more intimidating look, both from inside the ground and outside it, as well as adding even more noise to its already world-renowned atmosphere.

6. Mane makes it four at the Emirates There was much anticipation heading into the opening weekend of this season, with Liverpool’s clash with Arsenal at the Emirates the pick of the fixtures.

A poor first-half performance by the Reds saw them 1-0 down seconds before half-time, only for Coutinho to rescue his team with a stunning free-kick.

The 11 minutes after the restart was Liverpool’s most breathtaking spell of the season so far, and debutant Sadio Mane produced the moment of the match.

Adam Lallana and Coutinho had already put the Reds 3-1 up, before a sensational solo run by Mane ended in him smashing his shot into the top corner.

As the Senegalese forward celebrated on the back of Klopp, Liverpool supporters realised that this was a team capable of real magic.

That wide-eyed celebration will live long in the memory.

Ben Woodburn has been talked about as one of Liverpool’s most exciting youngsters for a while now, and he enjoyed one of the most memorable debuts in Reds history in November.

Introduced after 67 minutes against Leeds United in the League Cup quarter-final, what followed was pure footballing theatre.

Divock Origi had put the Reds ahead, and with nine minutes remaining, Georginio Wijnaldum found Woodburn in space inside the penalty area.

The 17-year-old buried his finish into the roof of the net, before celebrated joyously in front of the Kop. It felt like the birth of a new star at Liverpool.

4. Klopp signs on for another six years

Sometimes you take it for granted that Liverpool have someone as special as Klopp as their manager – his appointment was a mere pipe dream when Brendan Rodgers was in charge.

Despite only being in the Anfield hot-seat for nine months back in July, the 49-year-old was swift to show how dedicated he is in his current role by signing a new six-year deal at the club.

For all the excellent purchases Klopp made in the summer, including Sadio Made, Joel Matip and Wijnaldum, extending the German’s stay on Merseyside was Liverpool’s best piece of business in 2016.

Adam Lallana could well be Liverpool’s player of 2016, and if you had to pinpoint the moment his Reds career changed for the better, it would likely be Norwich away in January.

The England international was still a divisive figure at this point, with many supporters accusing him of flattering to deceive, but everything changed on that cold day at Carrow Road.

A balmy match saw Sebastien Bassong make it 4-4 in stoppage time, and once again, it looked as though Liverpool has failed to see out a game.

Lallana was on-hand to fire home a 95th-minute winner, however, and the scenes that followed were epic. Klopp charged down the touchline, his glasses went flying and most of the team embraced on the touchline.

The celebrations outlined the togetherness that Klopp has built in his short time at Anfield, and Lallana has never looked back since then.

First there was Gary McAllister in 2001. There there was Dirk Kuyt in 2007. Now you can add Mane to the list of Liverpool players to have scored stoppage time winners at Goodison Park.

The 227th Merseyside derby was far from a classic, and for so long it looked as though a dominant Reds side would be dropping two valuable points in the title race.

With Everton players out on their feet and eight minutes of added-on time being played, Sturridge’s shot hit the post and Mane scored the rebound from close-range.

Rarely has an away end gone off quite like it did that night, and such was the dramatic nature of the goal, it felt like Liverpool had earned nine points from it, rather than three.

A last-gasp winner away to your local rivals – it doesn’t get much better than that.

1. Lovren writes his name into history

Ignore the fact that Liverpool lost to Sevilla in the final, the 4-3 win over Dortmund in the Europa League quarter-final second-leg should be considered an all-time classic.

Having drawn 1-1 in the first-leg, Thomas Tuchel’s brilliant outfit were still favourites to progress to the semis, and two early Dortmund goals looked to have ended the Reds’ dream.

Except this was Liverpool on a European night – something takes hold of the entire club on nights such as these.

Even at 3-1 down with a quarter of the game remaining, Klopp and his team still believed, and Coutinho and Mamadou Sakho got them to within one of goal of progressing.

Then Dejan Lovren of all people, much-maligned and never a crowd favourite, rose to head home James Milner‘s cross in the dying seconds, and Anfield almost exploded.

It was a goal to possibly rival those scored by David Fairclough and Steven Gerrard, against Saint-Etienne and Olympiakos, respectively, and it was Liverpool’s undisputed moment of 2016.