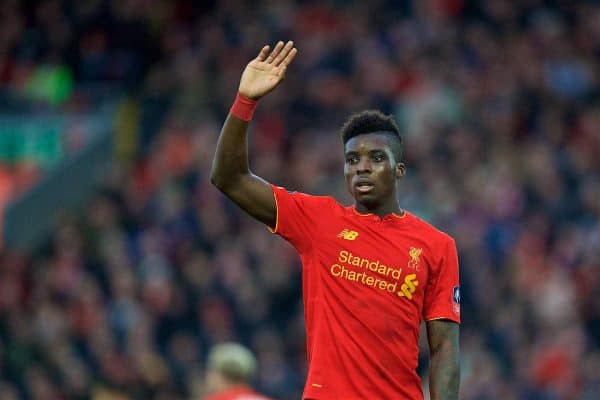 Liverpool have rejected interest from Championship clubs in winger Sheyi Ojo this month, with Jurgen Klopp earmarking him for a first-team role.

Newcastle United were reported to be pushing for a move to sign Ojo on loan, with Rafa Benitez hoping to benefit from his positive relationship with his former club to fuel a promotion push.

But while the Magpies weren’t alone in their interest in the 19-year-old this month, the former MK Dons youngster won’t be going anywhere.

That is according to the Liverpool Echo, who report that Ojo has a role to play in Klopp’s senior squad during a busy second half of the 2016/17 campaign.

Liverpool are still challenging on three fronts, in the Premier League, FA Cup and League Cup, and Klopp’s options are already thin in attacking areas due to injury and international duty.

Sadio Mane is away with Senegal at the Africa Cup of Nations and could be unavailable until after the Reds’ clash with Hull City at the beginning of February.

Meanwhile, Danny Ings has been ruled out for the rest of the season with a knee injury, while both Philippe Coutinho and Daniel Sturridge have suffered problems of their own in recent weeks.

Keeping Ojo on Merseyside is likely a sensible move, but needs to be followed up by positive management if that is to be the case.

Ojo has made just one appearance for the first team so far this season, after a back injury picked up in pre-season kept him out for a lengthy period.

This came at home to Plymouth Argyle in the FA Cup third round at Anfield, but Ojo and his fellow youngsters struggled to break down the League Two side, resulting in a 0-0 draw.

His next opportunity is set to come in Wednesday night’s replay in Devon, with Ojo needing to produce a strong display if called upon.

With Mane out, Klopp utilised Firmino, Origi and Adam Lallana as his three most attacking players in Sunday’s 1-1 draw away to Manchester United, but this is far from an ideal setup.

Lallana has proved more effective in his role in the middle of the park, while Firmino had previously excelled as a lone centre-forward.

Coutinho is due to return to the starting lineup in the near future, and can support Firmino from the left flank, but the right-sided role is still up for grabs.

Ojo is Liverpool’s only available natural winger, and backed by Klopp to remain with the club and contribute this season, he could grow in importance as the second half of the season unfolds.