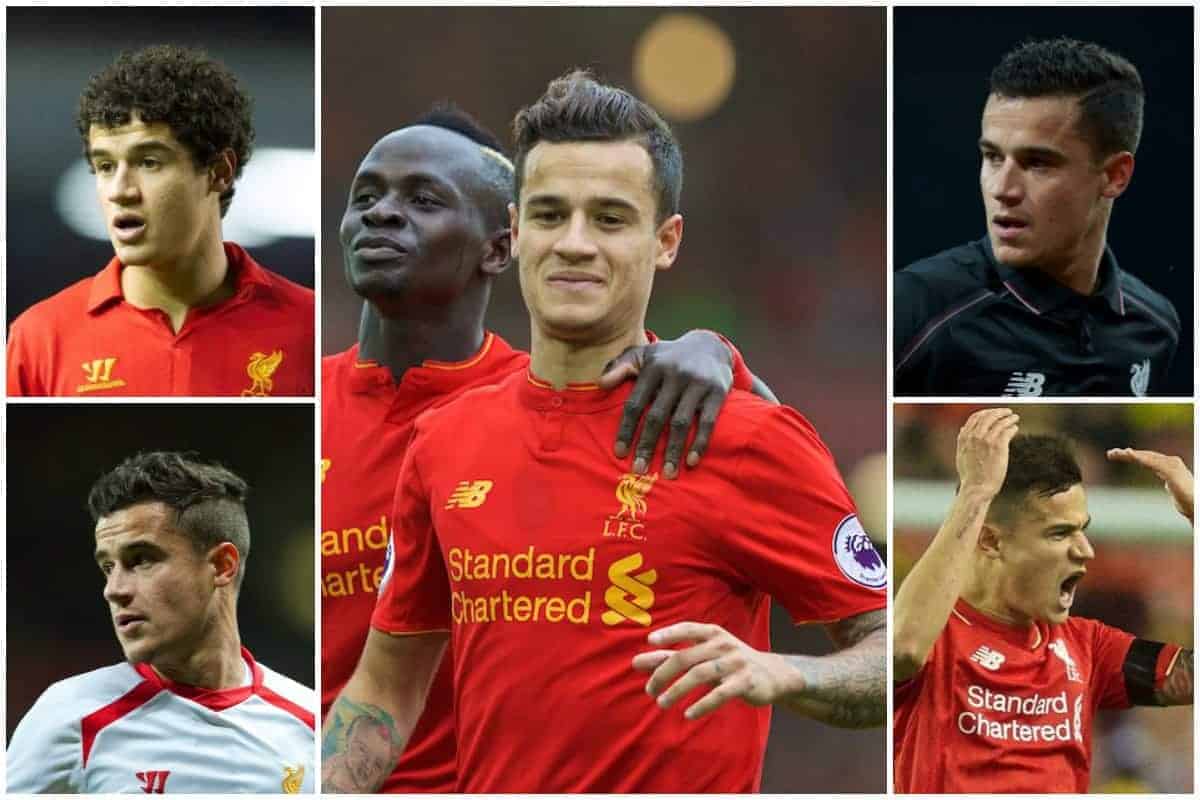 Signed four years ago, Philippe Coutinho‘s £8.5 million move from Inter Milan serves as the best proof of the virtues of Liverpool’s transfer policy.

Coutinho made the switch from San Siro to Anfield on January 30, 2013, becoming the fifth signing of Brendan Rodgers’ reign on Merseyside.

Following Fabio Borini, Joe Allen, Oussama Assaidi and Daniel Sturridge through the Shankly Gates, Coutinho’s arrival continued a trend of calculated gambles by the Reds in the transfer market.

But four years later, with Coutinho now Liverpool’s highest earner after signing a new five-year contract, he stands to vindicate this approach, amid a mixture of high-profile successes and frustrating failures.

His rise to stardom at Anfield was far from guaranteed, but after four years in the Reds’ No. 10 shirt, Coutinho can be considered the bargain signing of the Fenway Sports Group era. When Coutinho made the move to Liverpool, he had made just 82 senior appearances across spells with Vasco da Gama, Inter and Espanyol, with his reputation as one of the finest young talents in Brazil dwindling on his switch to Europe.

His prominence as a prodigious teenager saw him earn a move to Inter at just 16, and remaining with Vasco on loan for two years, he established himself as one of his country’s hottest prospects.

But Coutinho’s transition to life in Milan came with considerable difficulties, with his family failing to adapt to their move to Italy and Inter themselves much-changed from the club he signed with.

Most notably, Jose Mourinho was no longer manager, and in his place was Rafa Benitez, and before long Coutinho had played under Leonardo, Gian Piero Gasperini and Claudio Ranieri.

His time at Inter was more formative on a personal level, with a season on loan with Espanyol proving more influential for Coutinho the player, and while he returned from Spain having garnered the attention of Andrea Stramaccioni, his sixth manager at the San Siro, he did not remain there long.

With Ian Ayre made aware of Coutinho’s potential availability midway through the 2012/13 campaign, then Reds CEO fought off interest from Southampton to seal a deal.

This saw Coutinho turn down the opportunity to link up with Mauricio Pochettino, his former manager at Espanyol.

On joining Liverpool, Coutinho certainly did not look the part of a season-changing signing, with his diminutive stature cloaked in an oversized shirt, topped with a curly mop of hair.

Coutinho was an unassuming, raw talent who arrived along with doubts over his physicality.

The Reds were struggling before his debut, but lost just once in the Premier League after his first start—a 5-0 win at home to Swansea City—finishing the campaign with seven wins from their final 12 games; Coutinho scored three and assisted seven in 13 league appearances overall.

The arrival of the Brazilian, along with Sturridge, had resurrected the Reds under Rodgers, and this set the club up for a continued rise in the following seasons. Coutinho’s first full season with Liverpool saw the club surge to new heights under Rodgers, with the Ulsterman leading an unexpected charge for the Premier League title in 2013/14.

His No. 10 was one of the Reds’ top performers throughout the campaign, joining Sturridge, Raheem Sterling and Luis Suarez in one of Europe’s most formidable attacking units.

Though they ultimately fell short, Liverpool’s challenge at the top of the English top flight highlighted the potential at their disposal, and it was Coutinho who provided one of their most emphatic statements of intent.

With the Reds held 2-2 by Manchester City at Anfield towards the end of the season, the ball fell to Coutinho in the penalty area, and firing on the turn, gave his side the victory and signalled his future stardom.

While his form took a dive along with the rest of the squad in 2014/15, Coutinho still ended the season as Liverpool’s third-top goalscorer, with eight, serving as a glimmer of hope in the post-Suarez era. While Sterling and Steven Gerrard were among those to move on before 2015/16, Coutinho’s presence provided Klopp with a beacon to build from as he took over from Rodgers in October, and the Brazilian was central to the Reds’ League Cup and Europa League runs.

Allowing him the freedom to drift inside from the left flank, Klopp gave Coutinho license to dictate Liverpools attacking play, while pairing that with the work ethic required in his system.

Now part of an impressive unit with the likes of Adam Lallana, Sadio Mane and Roberto Firmino, Coutinho is hitting new heights in 2016/17, culminating in his new, five-year contract.

An acknowledgment of Coutinho’s growth in importance on Merseyside, this new deal makes the 24-year-old the club’s highest earner, tied down for the longest period and with the insistence that there is no release clause included, serves as a message to his suitors.

Vindication for the Reds

A former wonderkid floundering in one of Europe’s diminishing leagues, Coutinho was undeniably a gamble of a signing for Liverpool, but the midfielder proved to be a diamond from the rough for the Reds.

His £8.5 million switch was one based on previously untapped potential and, importantly, the right fit within Rodgers’ squad—which is how recruitment should be done.

It also proves that value can be found in the January market, and though Klopp is unlikely to change his approach to the winter window, preferring to adjust his squad during pre-season, there is certainly quality out there.

Pochettino’s interest in Coutinho back in 2013 is unsurprising on reflection, given their previous relationship and the transfer model Southampton have adopted since their return to the top flight.

It is telling that many have either gone on to seal big-money moves elsewhere or, like Van Dijk this season, are touted to join one of Europe’s biggest sides.

Largely, these players had the potential to reach that level even when plying their trade in Scotland, Portugal, France and the Netherlands, but they weren’t given the right stage to showcase that.

There are, of course, contrary examples when considering this method, with Lazar Markovic‘s recent loan to Hull City highlighting the danger in plucking signings from European obscurity.

But four years into his Liverpool career, Coutinho clearly proves that this policy can work—and the Reds are set to benefit from this for another five years to come.