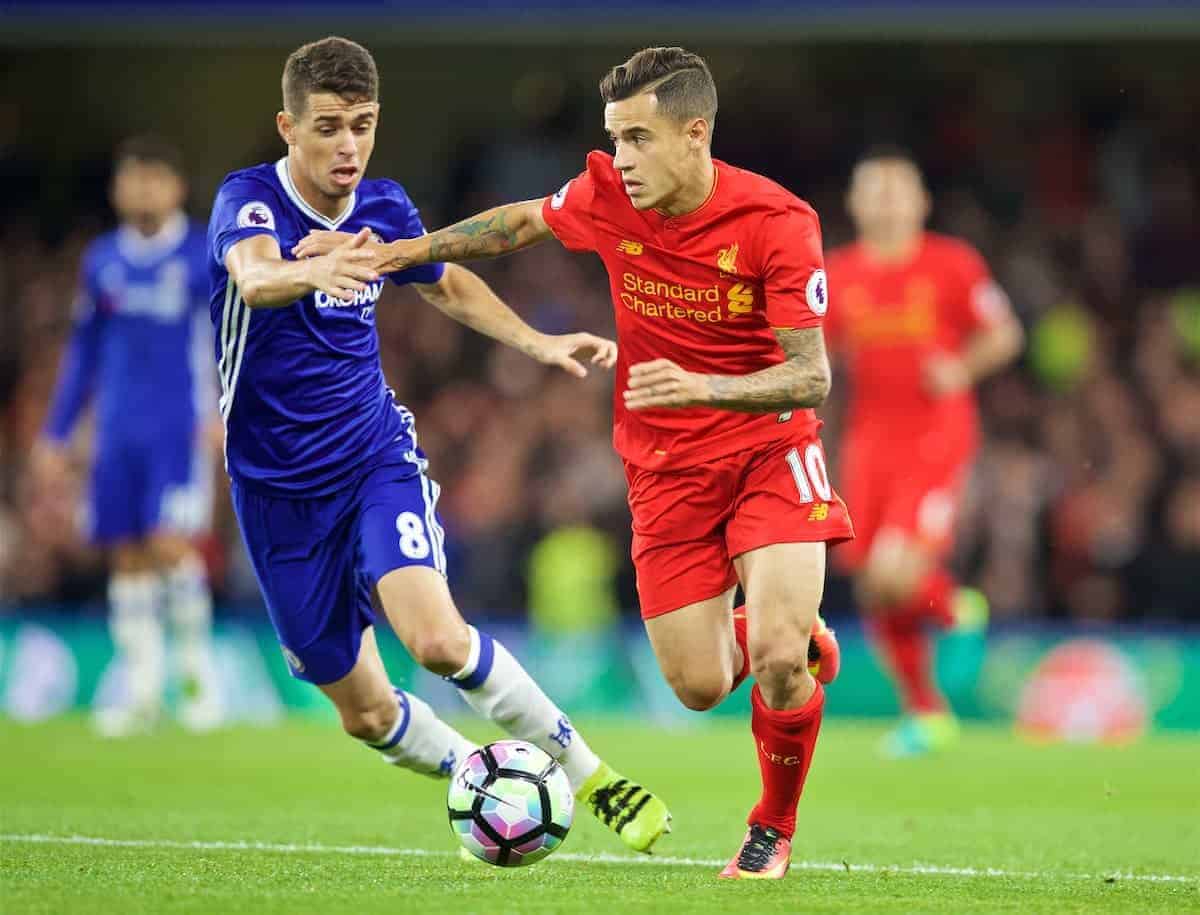 2017 has been, all told, an absolute shambles so far for Liverpool—so depending on whether your glass is half-full or half-empty, the next game is either the best opportunity to put things right or the worst possible fixture to face: league leaders Chelsea at Anfield on Tuesday night. Here’s everything you need to know about Antonio Conte’s outfit.

Away: Won eight, drawn one, lost two. The best away record in the Premier League.

Chelsea are now a very different side to the one Liverpool dismantled at Stamford Bridge at the beginning of the season. Soon after that defeat, Conte changed to his 3-4-3 formation and the blues haven’t looked back, roaring to the top of the table thanks to a rock-solid defence and plenty of guile in attack.

The midfield platform is key; the wing-backs can move narrow to create a bank of four, drop back to make a five in defence and the non-stop mobility of Ngolo Kante and Nemanja Matic is tremendously tough to bypass centrally. The two supporting attackers behind the striker have licence to roam infield, switch channels and dribble as they please, and they do so with great regularity.

Individually, Chelsea have great technique in the final third and at least three players who can make a scoring chance out of nothing. Collectively, they have constant diagonal runs in-from-out which allow changes of direction in build-up, overloads down the channels and untracked third man runs from deep in midfield. It goes without saying that Diego Costa must be closed down quickly to avoid his trademark ability to get a yard of space and shoot, but trying to stop Eden Hazard and Willian-or-Pedro drifting infield past challenges and finding room to shoot is just as difficult.

And, set pieces. Chelsea are a big threat off corners.

Is this a joke? Liverpool have failed to break down Plymouth and Southampton (twice) in recent weeks, only scored once against Wolves and only netted a penalty against Manchester United.

Chelsea, meanwhile, have the best defence in the Premier League and have only conceded nine on the road all season.

But…there’s a sure-fire way to enjoy at least a spell of domination against any back three outfit, and that’s to pin their wing-backs far downfield.

Without that capacity to use the wide players as an outlet, Chelsea can struggle to get out of their own half for stretches and Liverpool have to utilise that approach for at least part of the game, hoping to then show much better movement and penetration behind the defence to turn possession into chances.

Costa and Hazard for Chelsea, Joel Matip for Liverpool. The Reds’ defence has been back to its former woeful self over the last month, especially defending against the counter-attack, and Matip’s presence will be critical in trying to stem the inevitable onslaught that will be a horde of blue shirts bearing down on Simon Mignolet.

While Costa and Hazard are the prime creators and scorers for the Chelsea team, Pedro is the best at exploiting space in the inside channel and the left side of defence will have to be up to scratch too.

Chelsea have everyone fit and available, though it’s possible that either of Branislav Ivanovic or Asmir Begovic could move on before the game. In any case, neither would be in the starting XI.