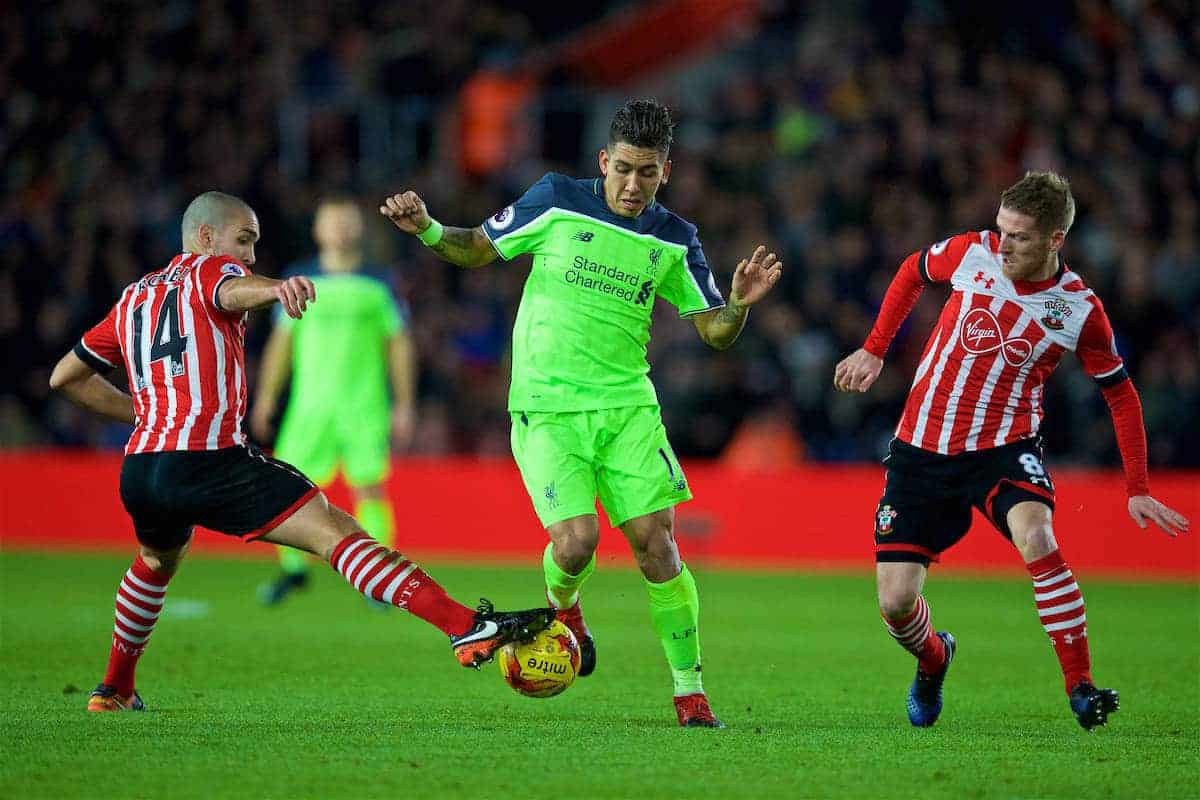 Liverpool’s hopes of League Cup glory were dented as the Reds slumped to a 1-0 loss in the semi-final first leg at Southampton, following a very disappointing performance.

Nathan Redmond’s composed finish after 20 minutes condemned the Reds to a first leg loss that leaves Jurgen Klopp‘s side with it all to do in the Anfield return.

The Reds were flat throughout at St Mary’s where they struggled defensively and failed to pose any meaningful threat in attack, and they return to Merseyside fortunate that they only trail by a one goal margin.

Here are five talking points from the frustrating first leg loss, including how the squad worryingly appear to be feeling the pace at a crucial part of the season. Klopp’s side ended 2016 with a huge effort to claim all three points against Man City, but 2017 has seen Liverpool struggle to maintain the performance level shown in some excellent wins before the turn of the year.

Indeed, starting in the 2-2 draw at Sunderland on 2nd January, Liverpool have laboured in performances and are clearly feeling the effects of the gruelling fixture list they currently find themselves attempting to keep up with.

The unrelenting schedule has taken the zip out of performances, with not even a rest last weekend for the majority of the XI that started at St Mary’s managing to re-energise a side who were flat-footed and ponderous in and out of possession.

A number of players, perhaps none more so than James Milner, look dead on their feet at the worst possible time, including Georgino Wijnaldum and Emre Can, who turned in a poor display, which presents a real concern with Jordan Henderson out.

That Klopp’s options are thin due to injury and absences in Sadio Mane’s case hasn’t helped, and though little appears on the horizon with additions currently, failure to bolster the squad this month could prove costly to Liverpool’s aspirations for the season ahead. Losing his status as Klopp’s No.1 will have hurt Karius, but the German has shown no signs of licking his wounds and accepting his fate on his return to the team.

Little could be concluded from his outing against Plymouth, given he could have sat in the Kop and still not conceded, but in his second successive game at St Mary’s, Karius showed he’s more than up for the fight to earn his place back, producing arguably his best display for the Reds.

It is hugely thanks to the 22-year-old that Liverpool return to Anfield with only one goal down, with Karius having pulled off two fine stops – spreading himself well for the first and reacting brilliantly for the second – in the first-half to deny Redmond a hat-trick.

The German’s shot-stopping was impressive, but so was the reliability of his distribution, while his decisiveness in dealing with balls swung into the box – one corner aside – and his audible communication at the back was excellent.

It looked like a break from action has benefitted him, allowing Karius to focus and train solidly out of the limelight, assisting him in rebuilding his confidence in the process.

Simon Mignolet seems set to return at Old Trafford, but Klopp will be pleased with Karius’ display. Arguably the biggest positive on a disappointing night was the return of Philippe Coutinho, who made a most welcome comeback after nine games out.

The Brazilian wasn’t quite able to rescue the Reds’ despite his best efforts in a promising final half-hour cameo in which he immediately made his presence felt, getting on the ball and probing with quick passes and jinking runs.

Though understandably slightly rusty, displayed in a shot from distance that flew into the travelling Kop, the increased belief he provided the team was noticeable, even if others around him couldn’t get involved to the scale he showed the desire to.

Though some good results have been picked up in his absence, the timing of Coutinho’s return couldn’t be better, with Klopp needing as many options as possible for the busiest and a season-defining period.

Klopp said Coutinho needed minutes “as soon as possible” and that he was able to play 30 at St Mary’s, and seemingly come through unscathed, suggests he will now be in contention for a starting role on Sunday at Old Trafford.

This would certainly be a priceless boost going into a huge game and it’s great to have him back.

Klopp will have noted plenty from what was arguably his side’s worst display of the season, and one of those will have been how desperately he needs some key absentees back.

Indeed, the performance of Liverpool’s sluggish midfield highlighted the importance of Jordan Henderson beyond doubt, while the complete chaos in the Reds’ defensive ranks once again confirmed Joel Matip’s status as Klopp’s best available centre-back.

With his team clearly feeling the absence of both players, and the pace of the unrelenting fixture list as noted, the boss will be hoping desperately that the duo can prove their fitness enough to feature at Old Trafford.

Klopp said both players were “on a good way” prior to Wednesday’s game, stating his hope that they would both be back in training ahead of the United clash.

If they both are and all goes to plan, the boss may well have to use introduce both straight back in, with their importance brutally highlighted in the disappointing defeat. Liverpool arrived at St Mary’s with a positive record in semi-final first legs, having won nine of 16 ties, drawing three and losing only four.

Klopp will have been desperate to add to that, establishing a lead to make things a small bit easier for the second leg and the fixtures that surround the make-or-break return fixture.

But the Reds failed to do so, instead slumping to a poor defeat that leaves Klopp’s men needing a big performance to turn the tie around at Anfield.

This result adds further pressure to a potentially season-defining period for the Reds, in which they look to maintain their Premier League title push in some big games and attempt to negotiate a potential banana skin FA Cup replay at Plymouth.

A big effort will be required from fans, players and management at Anfield, and Liverpool will have to muster the energy from somewhere to come up with a more threatening and winning display if they are to reach Wembley.