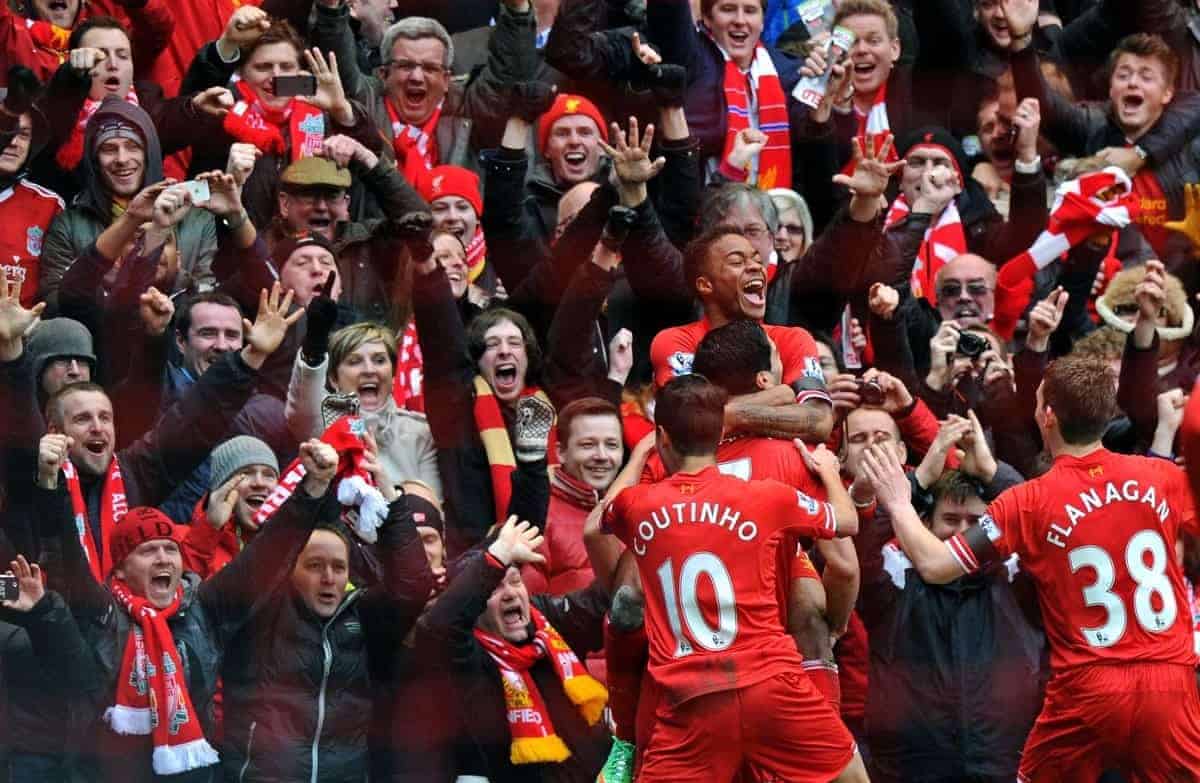 February 8, 2014 saw Liverpool kick off a lengthy run of Premier League victories with a 5-1 triumph at home to top-four rivals Arsenal.

The Reds welcomed Arsene Wenger’s side to Anfield for their second game of February in the 2013/14 campaign, sitting fourth in the table, eight points behind their first-placed opponents.

Having suffered five draws and five defeats in their 24 games prior to that Saturday afternoon clash, Liverpool needed a strong performance to establish their top-four placing.

In front of a passionate home support, Brendan Rodgers’ side did just that, putting four past Wojciech Szczesny in just 20 minutes.

The first came within 60 seconds, with Martin Skrtel touching home following a teasing free-kick, before the Slovak secured his brace with a header from a Steven Gerrard corner.

Luis Suarez then crashed an incredible volley against the post on the turn, with Kolo Toure shanking the follow-up, but Liverpool’s No. 7 did provide the third of the day shortly after that.

With the Reds on the break, Suarez faded a perfectly weighted ball across the box for Raheem Sterling to tap home, with Daniel Sturridge charging in after him to make sure.

Sturridge then made it 4-0 with a trademark strike, racing off the shoulder of Laurent Koscielny to place the ball home.

After the break, Sterling grabbed his second, before a Mikel Arteta penalty deprived Simon Mignolet and his back line of Skrtel, Toure, Aly Cissokho and Jon Flanagan a clean sheet.

It was an exceptional 90 minutes of football from Rodgers’ side, with Gerrard describing it as “definitely in the top three performances I have been involved in.”

Looking ahead to Saturday, 1100 days on from that emphatic performance against the league leaders, Jurgen Klopp‘s Liverpool will be hoping to harness that at home to Tottenham Hotspur.

Victory over Arsenal left the Reds in fourth, with the Gunners dropping down to second, marking the first in an incredible 11-game winning streak for Liverpool in the Premier League.

If Klopp can mastermind victory over Mauricio Pochettino’s Spurs on Saturday, the hope will be that he can then inspire a similarly successful run, and revive Liverpool’s fortunes.

So far, the Reds have suffered a slightly worse record leading up to that day in 2014, with one point fewer after 24 games, and were in better form heading into their clash with the Gunners on Merseyside.

But there are clear similarities in the importance of victory over Spurs three years later—and Anfield will be hoping history can repeat itself under Klopp.