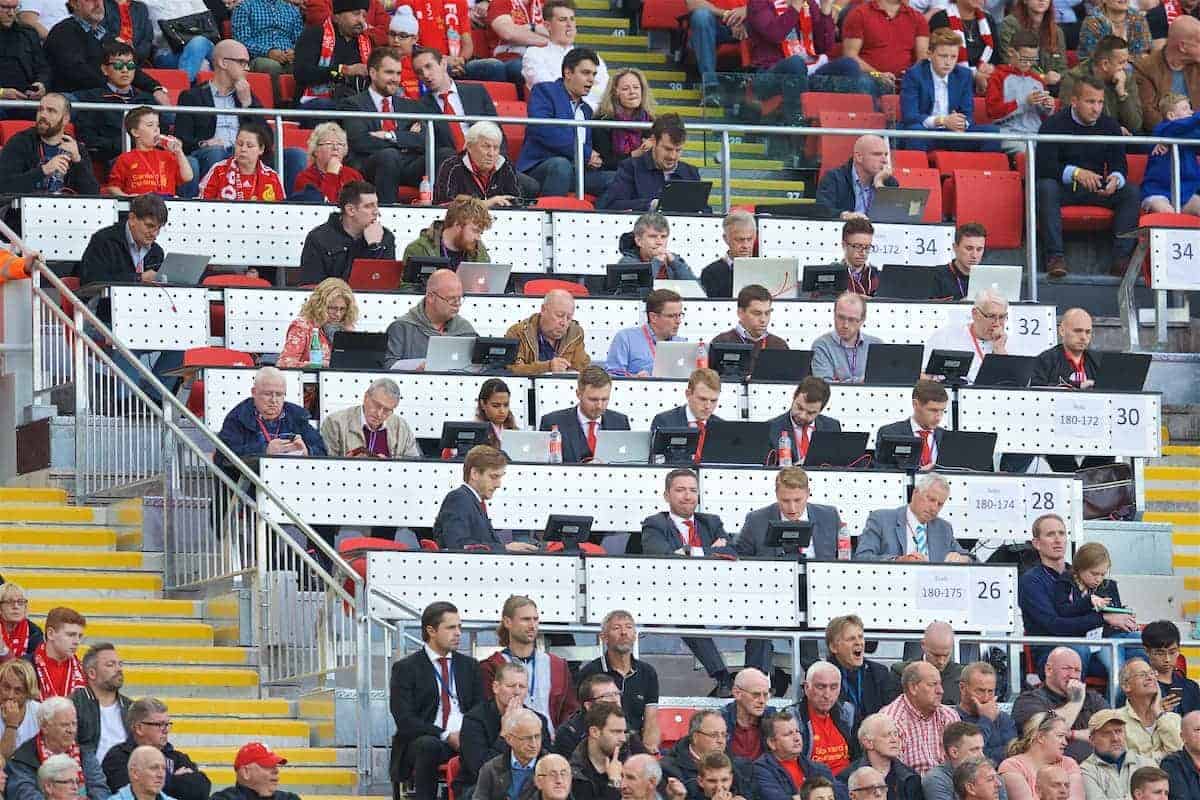 James Pearce of the Liverpool Echo is the latest to feature in our matchday Q&A series – with fans and media detailing their typical day at Anfield.

James is a busy man on a matchday, as you can see from his responses below, with plenty of deadlines to meet for the newspaper.

He’s been on the Echo’s sports desk for over a decade now and is well known not only in the UK but also around the world thanks to his role as the Echo’s chief Liverpool reporter.

Tell us about your typical matchday for a 3pm kick-off. What’s your pre-match routine? What time would you get to Anfield?

I usually get to Anfield around an hour and a half before kick-off. That gives me time to have a read of the programme and speak to a few people before writing up and sending over to the Echo desk the confirmed team news article, which is published on our site at 2pm.

Between then and kick-off most of the time is spent writing into our live matchday blog. I’m usually one of two or three Echo reporters on duty at a match and at around 2.30pm we do a Facebook Live broadcast talking about the team line ups and previewing the game.

And how long after the match are you at the stadium for? What duties do you have for the Echo?

During the match I’m tweeting and writing into the live blog, as well as putting together my Verdict piece which is around 1,000 words. At half-time there’s another Facebook Live, reflecting on the opening 45 minutes.

I’ll usually have to email a 300-word web match report on the final whistle and then I’ll have a further 45 minutes or so to complete the Verdict which is more analytical. That’s the article that goes into the newspaper.

I finish that Verdict while in the mixed zone waiting for the players to come through. Sometimes you can get 3 or 4 interviews, other times you come away empty handed. Often it’s dependent on the result.

By around 6.15pm/6.30pm the last of the players have come past and so then I’ll return to the media room. Sometimes I’ll write up one player reaction piece straight away and email to the desk, other times I’ll save it all for the following day.

Around 6.45pm everyone has sent over the copy required for upload to the site that day so the last duty is to do the Facebook Live reflecting on the game. This is usually done in the press conference room.
As the very patient stewards in the media room will testify, I’m usually the last one to leave around 7pm!

In your role as the Echo’s chief LFC correspondent, you’re quite well known among the fan base. Any funny stories that have arrived from this?

People quite often come up for a chat, whether it’s outside the ground or around the city. Most of the time they want to speak about transfers and who might be coming and going.

I was in a taxi in the city once when after asking me where I worked the driver said: “Don’t suppose you know that ****ing James Pearce do you?’ Told him I’d heard of him but he worked in a different department!

The only abuse usually arrives via social media. I’ve lost count of all the agendas and brown envelopes I’ve been accused of having and accepting. A very angry fan tweeted me on the final day of the 2014/15 season demanding my resignation. He went on to say that my position was untenable as a result of the 6-1 defeat to Stoke…..

How does your matchday routine differ for an away match, and which club in the Premier League has the worst media facilities?

I always aim to get to an away ground around two hours before kick-off as there’s a bit more to sort out in terms of parking, making sure the Wi-Fi works and getting a mixed zone pass.

Apart from that, all the duties matchday are the same. The facilities are excellent pretty much across the Premier League.

In terms of the view, I’d say the worst is probably Crystal Palace as when you are sat in the back row of their press box the view is like being a post box. But even Palace have a new media centre for the press conference which is excellent.

There really isn’t much to moan about in the Premier League.

Get there early and have a stroll around the ground. I love that buzz and sense of anticipation you can feel around the place on a big matchday.

I actually thought the atmosphere was much improved earlier in the season. It’s dropped off in the last couple of months but that’s been largely down to results.

More tickets available at a decent price for young adults would help.

* James Pearce is the chief Liverpool correspondent for the Liverpool Echo, you can follow him on Twitter @JamesPearceEcho.