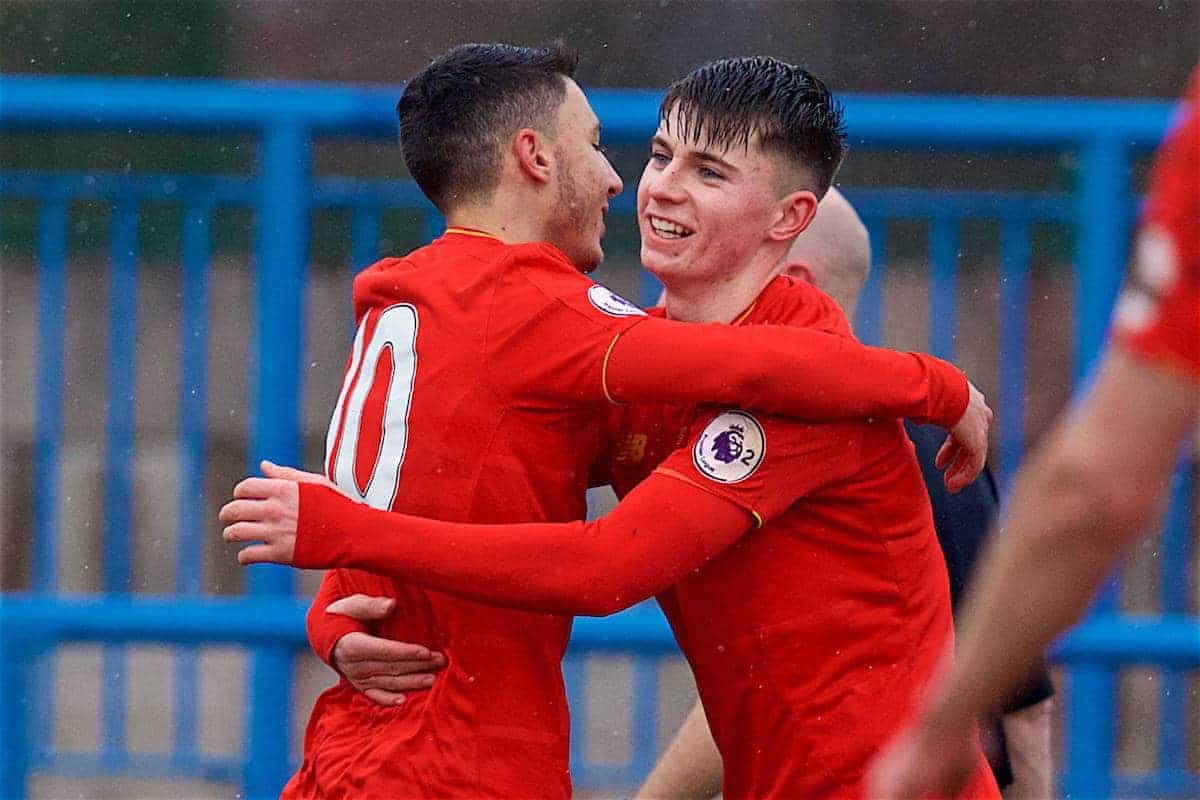 Liverpool U23s coach Mike Garrity has urged Ben Woodburn to hone his talents to an “outstanding” level, as he tries out in a variety of roles.

Woodburn has been one of the breakthrough stars of the season for the Reds, with Jurgen Klopp earmarking the 17-year-old for a bright future on Merseyside.

But while he has already made five appearances for the first team, along with eight more on the bench, he is still a regular fixture for the U23s.

His latest outing came in Sunday’s 6-2 win over Huddersfield U23s in the Premier League Cup, when the Wales youth international scored twice and set up two.

Most impressive was his mazy run, beating three Terriers defenders, to set up Matty Virtue’s backheeled effort, as well as his emphatic drilled finish for the Young Reds’ final goal of the afternoon.

“Going forward today he was electric, he was really, really good and the second goal was the highlight for me,” he told the Liverpool Echo.

“The way he took his touch out of the air and he obviously hit it off his left foot into the top corner [for his second], it’s a special goal.” Sunday’s victory came in a fierce atmosphere in Ashton-under-Lyne, with Alexander-Arnold involved in a physical altercation with Huddersfield midfield Jamie Spencer.

But Garrity praised Woodburn for keeping his head down, and shining in another different role in attack, after being shifted around from midfield to out wide to up front in recent weeks.

“He works really, really hard, he knows where he is, he knows his place.

“And at this moment in time he’s doing very, very well and I’d say he’s probably got a bright future ahead of him.

“Because he’s only so young, he’s obviously still learning the game so if we can play him in a couple of different areas it will only benefit him and it will develop him in the right way.

“Where he plays in the next five years, who knows? He’s going to be an attacking type player as you saw.

“With him playing in midfield it just gives him a different view for sure.” At 17, there is still a lot to learn for Woodburn, but Garrity believes this U23s apprenticeship will improve him in all areas.

“You can see obviously the quality he possesses so he’s got that in abundance. He’s got a strong mentality, he’s a very level-headed kid,” he added.

“But what he has to keep doing is keep improving his strengths, that the messages we give him, to continue with the strengths he has and become outstanding at those strengths.

“As he gets older and he matures he’ll only look upwards from there I’m sure.”