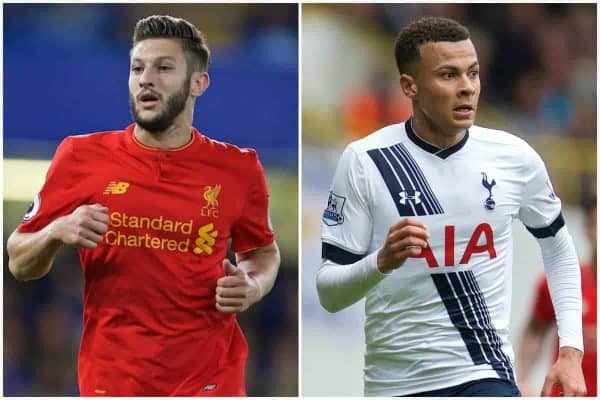 Liverpool’s clash with Tottenham Hotspur on Saturday gives an opportunity to pit Adam Lallana against one of his England team-mates, Dele Alli.

The Reds take on their top-four rivals at Anfield on Saturday evening, as they look to rewrite their miserable 2017 form and assert themselves in the race for the Champions League.

Mauricio Pochettino’s side are currently second in the Premier League table, four points ahead of fifth-placed Liverpool, and count one of the English top flight’s most in-form stars among their number.

Alli was named the Premier League‘s Player of the Month for January, after scoring five times in as many games last month, including a brace in Spurs’ 2-0 victory over league leaders Chelsea.

The former Liverpool target will be one of the key threats at Anfield this weekend, but Klopp will be hoping to call upon his own star attacking midfielder.

And ahead of the blockbuster clash, Oulala compared Alli with his international colleague, Lallana, to see who has the edge.

When assessing the key statistics, two conclusions can be made when pitting Lallana against Alli.

With both midfielders playing a similar number of minutes in the league so far this season, it seems that Alli is having the biggest impact on a regular basis.

Alli has also scored more goals than Lallana, with 11 strikes to his counterpart’s seven, although they are playing different roles for their respective sides this term.

However, while Alli is making his mark both in testing the goalkeeper and crafting opportunities for his team-mates, he remains a raw talent, with Lallana more well-rounded.

Furthermore, while Alli has beaten the goalkeeper more, Lallana has averaged more goals and assists combined (14) than the Spurs star (13).

It remains to be seen whether Lallana is passed fit to start at Anfield on Saturday, with Jurgen Klopp revealing he had suffered an Achilles injury, missing two days of training in the buildup.

But the German will be hoping he can call upon his key midfielder, with his performances in the box-to-box role proving central to Liverpool’s success.

If he does start, Lallana’s duel with Alli will be one of the most interesting encounters in what promises to be a fiercely fought battle between two of the Premier League‘s most entertaining sides.