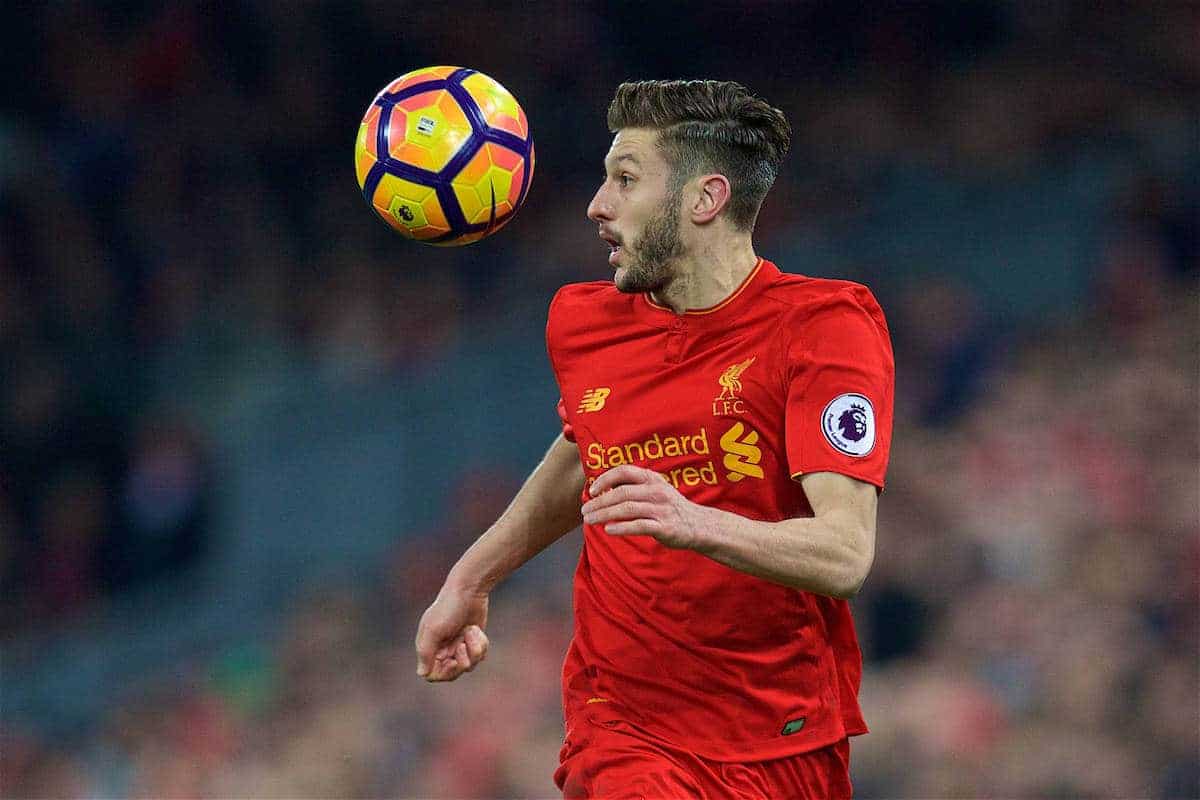 Adam Lallana‘s injury is a mighty blow to Liverpool, but they must plough on regardless and not feel sorry for themselves.

The Reds just cannot seem to go a chunk of time without losing a key player to injury, and Lallana is the latest victim, with a thigh issue picked up on England duty ruling him out for up to a month.

Lallana has been one of Liverpool’s star performers this season, if not their Player of the Year, as his career has taken another huge step in the right direction.

The lack of end product and influence that dogged the 28-year-old in his first 18 months at Anfield are now a thing of the past, with seven goals and as many assists to his name in the Premier League in 2016/17.

On top of that, his unbelievable work ethic, which has often seen him leading Jurgen Klopp‘s much-lauded pressing game, have been integral to Liverpool’s success.

In many ways, he embodies this current Reds side more than any other player, and his relationship with next-door neighbour Klopp is also incredibly strong.

Although Lallana’s absence is sure to take a certain edge off Liverpool’s play, it is time for the team to show they can perform with important attacking players missing.

When Lallana, Sadio Mane, Philippe Coutinho and Roberto Firmino have all been available, the Reds have purred in the final third, with no side in the country looking more devastating.

Unfortunately, take one of them out and the entire jigsaw falls to pieces. This cannot keep happening, especially if Liverpool want Champions League football at Anfield next season.

The Reds’ rivals have missed key men but battled on through, and starting with Saturday’s Merseyside derby, they have to show they can still tick with someone else brought in.

When it comes to how Klopp reacts to making do without one of his favourite players, there are several options that stand out. Coutinho’s form and future at Anfield have been discussed a lot of late, and Liverpool badly need their talismanic Brazilian back to his best.

There are many who believe his current left-sided role fails to get the very best out of a player lacking blistering pace, with an attacking, central-midfield berth suiting him down to the ground.

Saturday could provide Klopp with a good chance to utilise the Brazilian there, simply slotting him into Lallana’s position alongside Georginio Wijnaldum.

There are shades of Andres Iniesta about Coutinho—Barcelona reportedly want him to replace the legendary Spaniard at Camp Nou—and it would be interesting to see how he thrives in a midfield three against Everton.

This would then likely mean Firmino being pushed out to the left and Divock Origi coming in, which is admittedly far from ideal. Ben Woodburn is also an option, should Firmino remain central. Captain Jordan Henderson is still facing a race against time to be fit for the derby, but if he makes it, it may now not be in place of Emre Can, as was expected prior to Lallana’s injury diagnosis.

With the Englishman now out, Klopp could push Can alongside Wijnaldum, allowing Henderson to slot back into the deep-lying role he has made his own this season.

Coutinho would then remain on the left, dovetailing with Mane and Firmino in the three-pronged attack that has brought so much success.

Having Henderson, Can and Wijnaldum in the same midfield does seem to lack a certain balance, however, with not enough attacking impetus present. They all feel a little samey.

The Return of Grujic When Marko Grujic looped a header into the Barcelona net at Wembley last August, it felt as though Liverpool had a new midfield favourite on their hands.

Injury problems and failure to oust more experienced players have led to a frustrating opening season on Merseyside, however, with the 20-year-old Serb making just five first-team appearances in total.

It feels like an almighty risk in many ways, but Klopp could be tempted to throw Grujic in at the deep end this weekend, following some impressive performances for the U23s.

With Henderson still struggling to be fit, Can could remain at the base of the midfield, with Grujic working in tandem with Wijnaldum. It’s certainly an option.

Liverpool have picked up seven points from a possible nine in their last three matches, including a win and a draw against Arsenal and Man City, respectively.

The top-four race is going right to the wire, and it is imperative that the Reds keep this momentum going.

Man United and Arsenal will not give up the chase, while Spurs and City are catchable.

After Everton, every one of Liverpool’s final eight games looks inviting, but the wrong result on Saturday lunchtime could have such a negative impact.

Klopp’s men need to come flying out of the traps and show they can battle on without Lallana running endlessly and weaving his magic.

Should Henderson be deemed fit, the safe bet is to play the captain alongside Can and Wijnaldum in the middle, but using Coutinho deeper would keep the midfield full of creativity.

Whatever Klopp’s decision, a dip in performance level and dropped points should not even be considered for the visit of Everton and beyond.