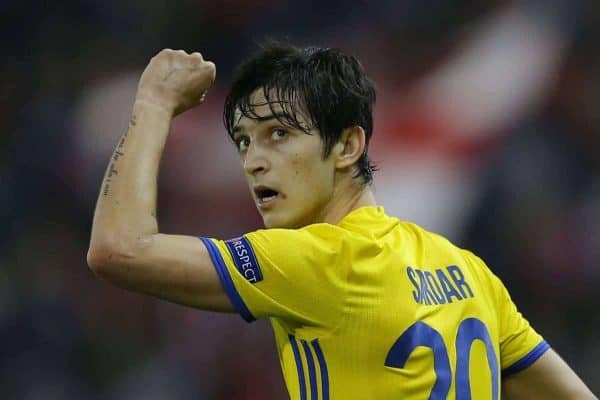 FC Rostov striker Sardar Azmoun has claimed he rejected the opportunity to join Liverpool in the January transfer window due to the role on offer.

Azmoun emerged as a surprise target for the Reds back in November, with Jurgen Klopp earmarking the 22-year-old as a potential attacking reinforcement.

The following month, the Iran international admitted that if an offer was made he would “take his time to look into it,” with PSV Eindhoven and Inter Milan also said to be interested.

And speaking to the Qatar outlet SC.QA this week, Azmoun claimed he eventually turned down the Reds’ approach.

The striker explained that this came due to the peripheral role he would play under Klopp, filling in while Sadio Mane and Philippe Coutinho were both absent.

“There were talks of Liverpool having expressed an interest in me during the past winter transfer window,” he said.

“However, I did not feel the time to move was right.

“I would have ended up playing a few games and then spent a great deal of time on the bench.

“Liverpool were only looking to fill a void for a particular part of their season.”

Klopp is likely to still be looking to add to his centre-forward ranks this summer, with Liverpool set to compete in either the Champions League or the Europa League.

This could see Liverpool revive their interest in Azmoun, with further opportunities likely in 2017/18.

And continuing to address his future, Azmoun did confirm he would be looking to leave Rostov for a “top European club,” opening up the possibility of joining the Reds in the future.

“I want to move to a big club to develop as a player and therefore I will time the move with great precision,” he added.

“I am sure I will be playing for a top European club in the near future.”

Azmoun is a tall, strong centre-forward with great technical ability, and is able to operate as either a target man or as an off-shoulder striker.

Arriving to compete with the likes of Roberto Firmino and Divock Origi, with Daniel Sturridge expected to leave having been marginalised under Klopp, Azmoun could offer Liverpool a different option.

But it is clear the ambitious forward is not willing to play a backup role on Merseyside, as he looks to further his development.