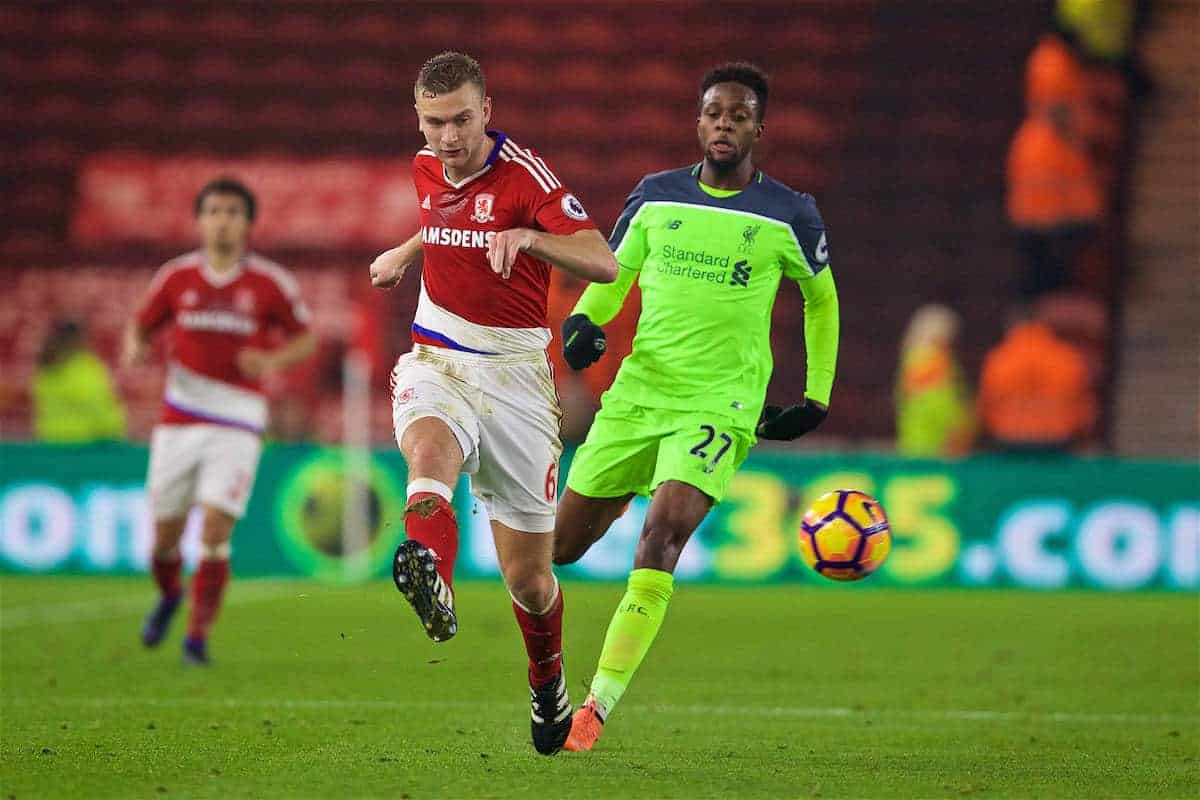 Liverpool are reported to have set their sights on Middlesbrough centre-back Ben Gibson, less than 24 hours after his call-up to the England squad.

Gibson replaced the injured Chris Smalling for the Three Lions’ World Cup qualifier against Lithuania at Wembley Stadium, as recognition for his excellent form in 2016/17.

The 24-year-old has been one of Middlesbrough‘s outstanding players despite their relegation battle this season, and has played every minute of every game in the Premier League so far.

This has seemingly not gone unnoticed in the transfer market, with the Mail claiming four clubs are chasing Gibson’s signature this summer.

Typically, Liverpool are named among those interested, along with Tottenham, Chelsea and Man City, with Gibson poised to make the step up to the top end of the league.

However, Middlesbrough are said to be looking for at least £25 million to part ways with their defensive stalwart.

Gibson’s connection with Jonathan Woodgate, who now serves as a scout for Liverpool, could prove pivotal.

The duo are said to have formed a “close bond,” and the ex-Middlesbrough centre-back will no doubt have served up a glowing appraisal of his successor at the Riverside.

Gibson is a left-footed defender who is hugely comfortable with the ball at his feet, and would be a strong addition to Klopp’s ranks at the back. He is not the only England centre-back said to be on Liverpool’s radar for the summer, with Burnley‘s Michael Keane also reported to be a possible target.

Southampton‘s Virgil van Dijk, Borussia Dortmund’s Matthias Ginter and Atletico Madrid’s Jose Gimenez have also been touted with moves to Merseyside ahead of a busy 2017/18 campaign.

Unlike the aforementioned quartet, however, Gibson does seem to be a more viable option given his natural tendency to play on the left.

Joel Matip is already installed as Klopp’s first choice on the right of Liverpool’s centre-back pairing, and finding a long-term partner for the Cameroonian seems to be a priority.

Gibson is not at the level of Van Dijk, however, and would remain something of a work in progress if he made the switch to Anfield.

One thing is clear, however, in that Klopp is seeking to add another centre-back to his squad, and this could well be due to the imminent departure of Lucas Leiva.

The Brazilian is expected to leave the club at the end of the season, leaving Dejan Lovren, Ragnar Klavan and Joe Gomez serving as Klopp’s other options alongside Matip.