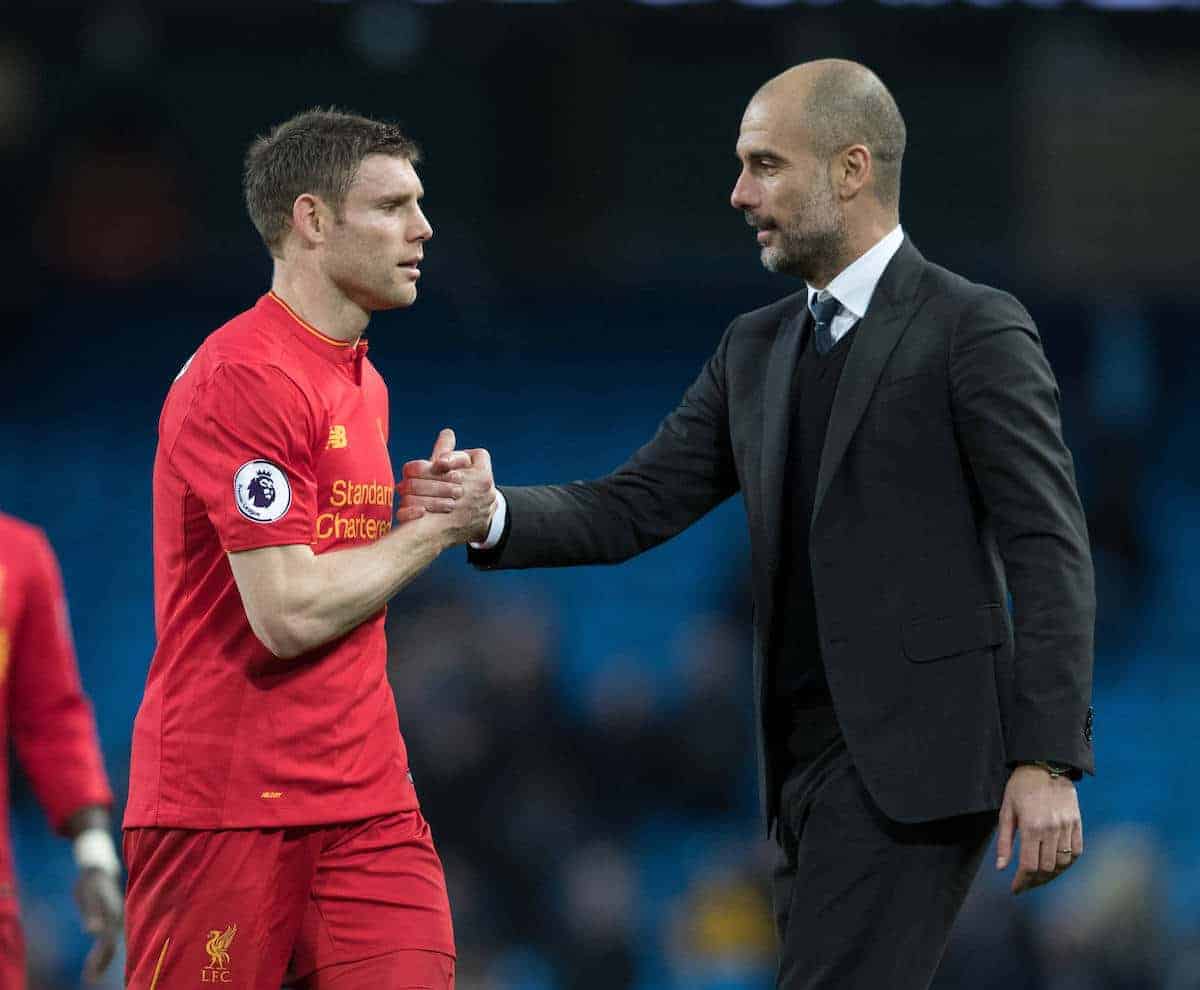 Liverpool and Man City played out a thrilling 1-1 draw at the Etihad on Sunday, with a number of Reds players producing excellent displays.

All in all, this was a relatively quiet afternoon for Mignolet, while others around him were running themselves silly.

He was almost caught out from a Kevin De Bruyne cross in the first-half, but otherwise, his decision-making was good whenever called upon.

Clyne has not been at his consistent best of late, but he was impressive against the rapid Leroy Sane.

At times, there was little he could about the winger’s pace and movement, but he dug deep and displayed his defensive expertise a number of times.

Matip has not hit his early-season heights since injury, but like Clyne, this was an encouraging showing from the centre-back.

He used the ball intelligently a number of times, sliding passes into the midfield, and he was generally dominant aerially. Dealt well with the relentless Sergio Aguero.

Missed a good chance with a first-half header.

There was a shakiness to the 31-year-old’s performance, particularly when he had the ball at his feet.

His lack of pace was also an issue against City’s blistering attacking, but in fairness, his experience and no-nonsense style did shine through on occasions.

Could have done better for Aguero’s equaliser, although De Bruyne’s assist was inch-perfect. Milner was given a torrid opening 45 minutes by former Liverpool man Raheem Sterling, with his younger opponent having him for speed time and time again.

In typical Milner style, however, his effort levels were superb throughout, and his nerveless penalty gave the Reds the lead. Is there a better man from the spot in the Premier League?

One of the Reds’ most divisive players recently, anyone laying into Can after his performance at the Etihad is clearly carrying a vendetta.

The German was fantastic in the middle of the park, tackling hard, spraying passes around and showing great heart, and some unstoppable runs forward showcased his box-to-box ability.

An early booking outlined the snide side to his game – something not enough Liverpool players possess – while his pass allowed Firmino to win the penalty.

Wijnaldum will produce more eye-catching attacking displays for Liverpool, but he was another who shone bright throughout an engaging contest.

The 26-year-old has such underrated physical strength, and his decision-making in key areas caught the eye. His delightful pass in the lead-up to Lallana’s shocking miss was class personified.

A brilliant performance from an excellent footballer. Lallana has had such a brilliant season, but he was one of his side’s less noticeable players for the majority of the game.

One stinging shot forced Willy Caballero into good save before half-time, and while his work-rate could never be questioned, his general quality and influence were lacking. That said, he became more noticeable late on.

Missed an absolute sitter late in the day, failing to connect properly from Firmino’s pass with the goal gaping.

What is up with Liverpool’s brilliant Brazilian right now?

Coutinho once again looked a shadow of his autumn self, with his set-pieces poor, work ethic questionable and all-round demeanour frustrating. Like Lallana, however, he started to purr at times during the second-half.

Maybe he isn’t 100 per cent fit – whatever the issue is, Klopp needs his star man back to his best as soon as possible.

Without question, Mane looked Liverpool’s most dangerous attacking player throughout, with his speed, movement and unpredictability scaring the life out of City’s defence.

Admittedly, his final ball was less reliable than usual, but he always looked like making something happen. Came agonisingly close to going clean through in the dying minutes, but his touch let him down.

Despite this, he was once again a stand-out performer.

Returning to the side in place of Divock Origi, worked hard but couldn’t supply the finish when required.

One curled effort was kept out by Caballero, and while his off-the-ball work was effective – he made one superb headed clearance from a De Bruyne corner – he needed to offer more in the final third.

The energetic forward won his side’s penalty, having been fouled by Gael Clichy, but he missed a golden opportunity to make it 2-0. Firmino’s finishing is the main thing that lets him down.

Let’s remember, though, he missed most the week’s training and only returned to full training the day before the game!

Offered almost nothing in terms of work-rate and looked as leggy as those around him, despite being introduced after 72 minutes.

Once again, Klopp got a good performance out of his team in a big game, with their effort levels and attacking class both very much on show.

Retaining Klavan in place of Lovren paid-off on the whole, and although defensively Liverpool looked susceptible, this was a game they would have lost under previous managers.