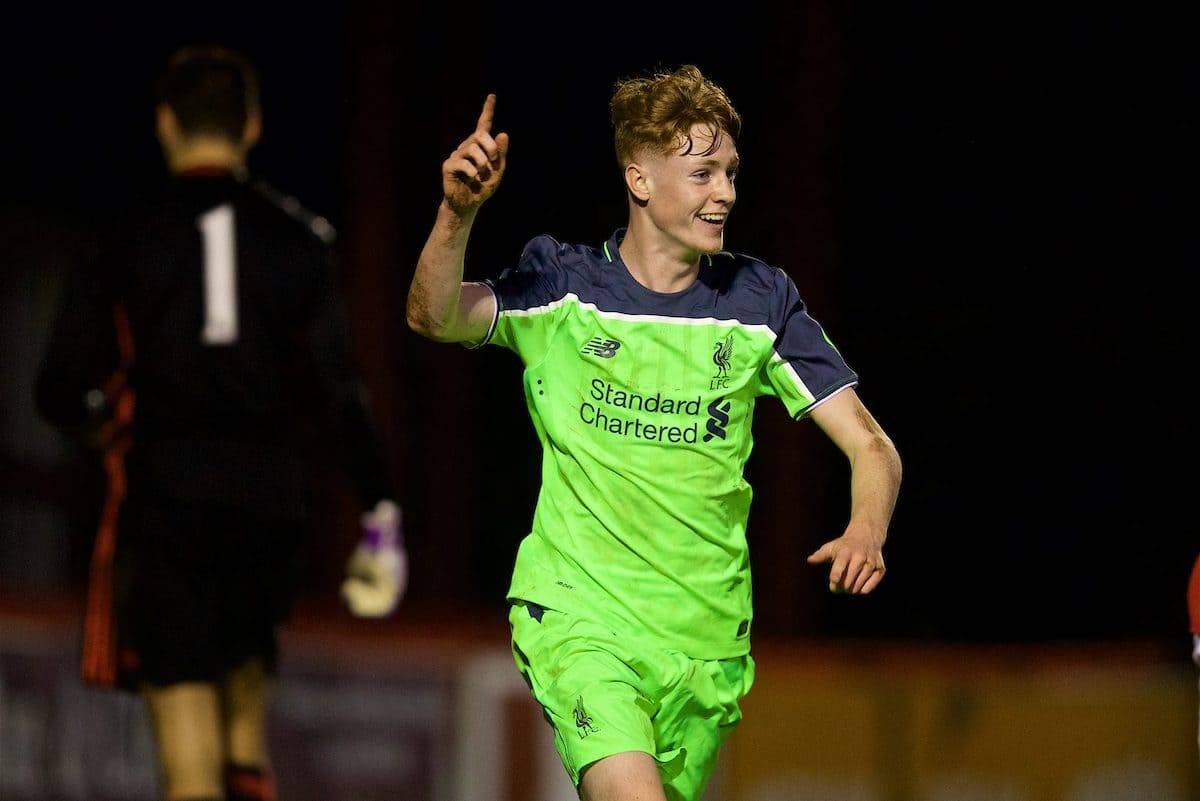 With Steven Gerrard watching on from the dugout, the Liverpool U18s clawed back for a dramatic 2-2 draw with Man United in Altrincham.

After sealing a third-placed finish in the U18 Premier League by virtue of a 2-0 win over Man City at the beginning of March, the young Reds began their play-off campaign at Moss Lane on Friday night.

With Gerrard, Steve McManaman and Rob Jones among those present, Neil Critchley‘s side pitted their strength against those of a fierce rival in United.

Critchley was able to include the likes of Caiohmin Kelleher, Conor Masterson, Liam Coyle and Yan Dhanda in his starting lineup, along with promising youngsters Nico Williams, Adam Lewis and Abdi Sharif.

Wearing their toxic thunder kit under the lights in Altrincham, the U18s will have been eager to kick off their quest for the title with a win, but they were forced to settle for a draw. After an end-to-end start, it was Liverpool who broke the deadlock, with Lewis and Liam Millar combining down the left, before the latter laid an excellent low cross on for McAuley to touch home.

The young Reds were dealt an early blow as Millar was forced off with an injury after the goal, with Manchester native Okera Simmonds taking the Canadian’s place in attack.

Critchley was served up another major problem as Lewis threw himself into an awful challenge on United midfielder Indy Boonen, with the 17-year-old sent off on the half-hour mark.

The rest of the half went without many big chances for either side, with Dhanda going closest to adding a second for Critchley’s U18s, but the forward was unable to hit the target before the interval. United looked to take advantage of their extra man in the second half, sending on England U17s forward Angel Gomes, with Kelleher forced into a great save to deny Callum Whelan shortly after kickoff.

The home side continued to push for an equaliser, and with 15-year-old Nico Williams off the pitch Kelleher was forced to make another bright stop to keep Liverpool ahead approaching the hour mark.

They finally broke a steadfast Reds defence on 69 minutes, with substitute Aidan Barlow firing low past an unfortunate Kelleher.

Liverpool were denied a penalty following a push on Okera Simmonds, with both luck and momentum firmly swinging in United’s direction, and it wasn’t long before they’d gone ahead.

With a poor clearance falling at Barlow’s feet outside the penalty area, the 17-year-old bent an unstoppable effort beyond Kelleher and into the top corner. That wasn’t to be the final goal, however, with Dhanda’s excellent free-kick touched home by substitute Luis Longstaff to seal a uplifting draw in the dying stages.

The young Reds are next in action on at home to Blackburn Rovers on March 18, as their play-off push continues.