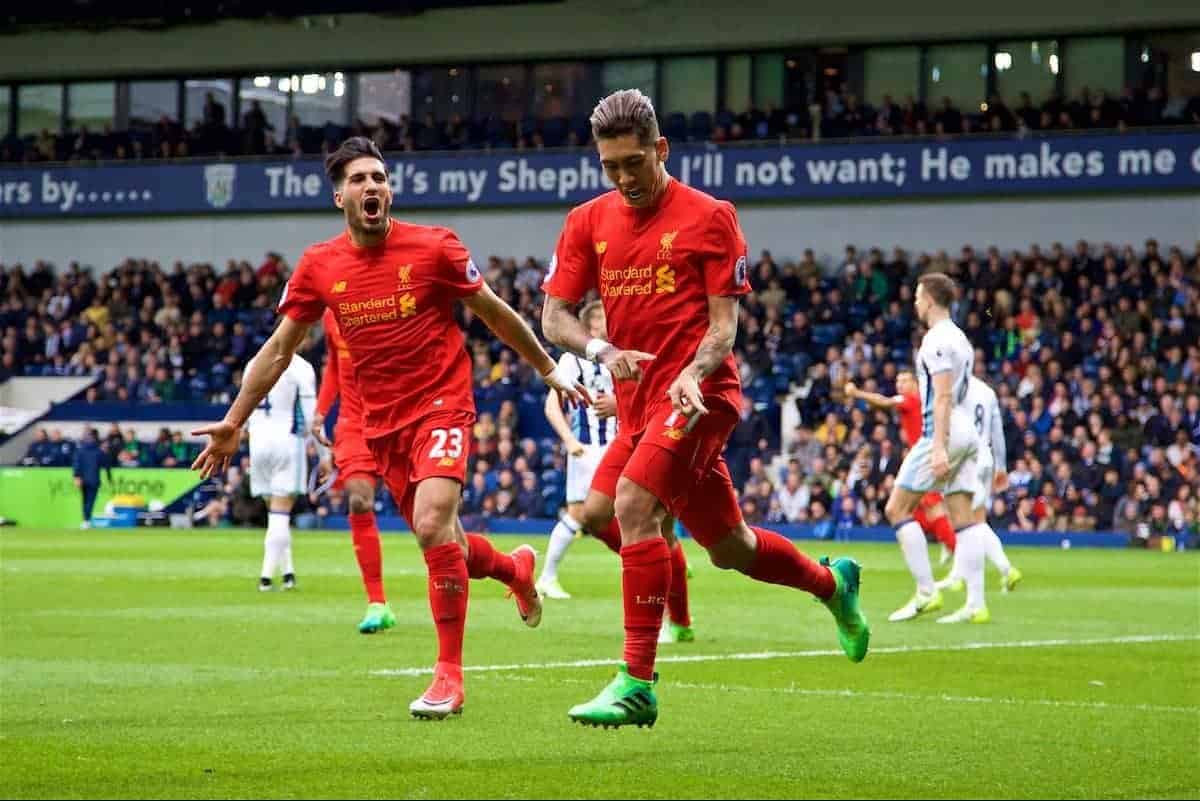 Liverpool went one step closer to securing a place in the top four following a 1-0 victory against West Brom on Sunday afternoon.

Liverpool were still without a number of key players including Jordan Henderson, Adam Lallana, Sadio Mane and Ragnar Klavan.

However, they were boosted by the return of Philippe Coutinho and Roberto Firmino in the starting line-up and Lucas Leiva came in for Klavan as Liverpool reverted to a back four.

It was a slow start from both teams as Liverpool failed to provide any clear-cut chances in the first half and rarely threatened West Brom‘s defence.

The opening 45 minutes went by with little action but Firmino’s crucial header on the stroke of half-time gave Liverpool a much-needed lead.

James Milner had a chance to double the Reds’ lead in the second half and Divock Origi also had a goal ruled out for being offside.

West Brom pressed Liverpool’s defence in the final 15 minutes and started to look threatening which meant it was a nervy ending.

Even Ben Foster got involved as an outfield player for the hosts but Liverpool managed to hold on to a crucial 1-0 victory.

Here are all the best reactions from Liverpool supporters on social media throughout the game;

With Coutinho and Firmino returning, fans were pleased with the starting line-up…

“Strongest possible XI available. Hopefully a nice early goal can set us on our way.”
– Andy Bailey on Facebook.

After a truly boring start, fans were delighted when Firmino finished the half with a goal…

I loved that goal far more than i should have. Scoring from a set piece against West Brom is just perfect

That should open the game up, boring first half apart from Firmino's header.

“Studge for a 92nd minute clincher.”
– 44yearsafan on the forums.

It's all over after the maddest final few minutes I've ever seen. Important win for #LFC that, even if it wasn't entertaining.

“Most important win of the season for me. West brom did everything to rob one point away from us”
– Red Warrior on the forums.

“What a wonderful play from the boys! Simon Mignolet is getting better every day he made a great save. Thanks boys #YNWA# three pints at our side and back to 3rd!!”
– Rame Nabs on Facebook.

That's probably the closest I've come to having a cardiac arrest from football! But 3 points! Up the mighty reds!!

FT: 0-1. Massive three points. Could be the biggest two weeks of our season. Hard fought but hard won.

“Depleted side but Klopp has pulled them together….well done to Can and Migs for turning our criticism into something constructive…they have been pivotal so far”
– Kevin Moodley on Facebook.

Of all the potential outcomes today, I don't think any of us would have suggested a 1-0 win from at set piece situation.

“No down-playing it, this is a massive win.”
– John B on the forums.

Superb LFC away victory. Tense at the end! A very welcome clean sheet!! Two tough away games battled through and got the maximum points!

Huge word of praise for Mignolet. Don't think he's good enough for Liverpool, but has made enormous saves in the last couple of games.

An ugly win! #LFC have shown a totally different side in the last two games and the three points have been even sweeter for it. Five to go!