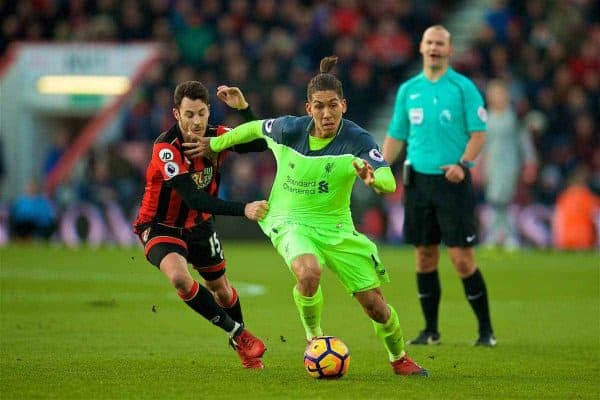 Liverpool’s next opposition in their top-four challenge are Eddie Howe’s Bournemouth; here’s everything you need to know about the Cherries.

Eddie Howe is still considered a front-runner among some sections of the media to replace Arsene Wenger at Arsenal eventually, which tells its own story about his team’s style.

Bournemouth are still extremely keen to play out of defence, trusting goalkeeper Artur Boruc and his back four to evade any attempts to win the ball high upfield and then to get the wide men and forwards working together on the attack.

The Cherries play four at the back and four in midfield, then have changed mid-season: from one (initially Jack Wilshere) behind one striker early on, to two out-and-out forwards in the past month or two.

They give themselves an out-ball with willing runners in the channels, have central midfielders who get through tremendous amounts of work and will always look to have players in the box when they attack, be it the mobile forwards or the quartet from the middle third surging on to support.

Josh King and Benik Afobe are the strikers of choice at present, and both have hit decent streaks: King scored seven of his team’s goals in a row between February and March, while Afobe has a goal and an assist in his last three appearances.

Former Man United youngster King is the big danger, both in individual moments when one-on-one against defences and also as the go-to man to get shots away from any angle.

For those wondering about former Red Jordon Ibe, the winger has played six times in the league in 2017—just twice for more than half an hour.

The real positive from Bournemouth‘s perspective, though, is that the entire team is capable of passing, creating angles and getting shots away—they don’t just rely on one player in the slightest.

If fit, Ryan Fraser is a menace with his hard work, tenacity and ability to exploit space, as Liverpool found out in the reverse fixture.

That’s high upfield, not put in knee-height challenges. Bournemouth‘s tendency to pass it around and wait for their chance to move forward can lead them to make poor decisions in possession, and as impressive as they have been in reaching these heights, their back four are not elite quality.

Everton showed the way forward to deal with the Cherries and Liverpool should heed that performance at Goodison Park: hunt down passes around Bournemouth‘s own area, and chances will fall the way of the Reds’ attack.

It’s not just about the initial delivery off corners and free-kicks; in the main, Bournemouth have done reasonably well defending these.

Instead, it’s on the next phase of play when they have come undone multiple times this season, not quickly enough into shape when the rebound is crossed back in, the late runners arrive in the box or the loose ball is challenged for.

React quickest after those corners and free-kicks, and Liverpool might have a surprisingly straight-forward route to goal.

Unless Howe brings Wilshere back in, the Reds should be three-on-two in the centre of the park. Derby-day energy-lag isn’t an excuse here, as Bournemouth also had a derby, against Southampton.

Liverpool have to flood and overwhelm the Cherries, even when their wide midfielders tuck in, and dominate territory as a result.

No Adam Lallana and now no Sadio Mane. Liverpool need creativity, goals and aggression to come from somewhere.

So it’s Roberto Firmino who must show the consistency and high levels of quality to get the Reds on the front foot and keep them there.

For Bournemouth, with a poor away defensive record this season, Boruc will have to play a blinder to keep his team in it.

Callum Wilson has a long-term injury, while Tyrone Mings is suspended.