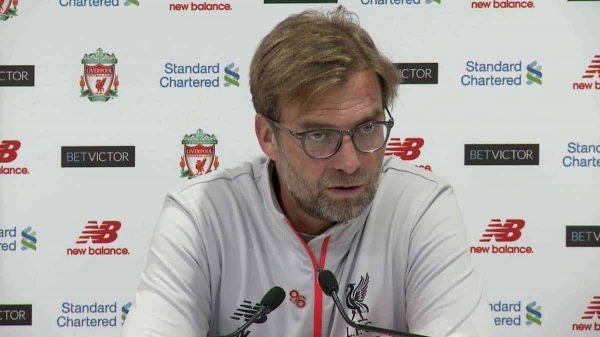 Goals from Philippe Coutinho and Divock Origi, cancelling out Benik Afobe’s opener, looked to have sealed the three points at Anfield.

But a late, late strike from ex-Man United forward Josh King put paid to that, with the Cherries taking more points from Klopp’s side, after their 4-3 win at Dean Court in December.

Speaking after the game, Klopp questioned the Reds’ concentration and their work at the back, though he was not wholly without optimism.

“The start was not good, we were a little bit late in mind,” he told reporters.

“We were not really concentrated. Three, four situations before [Afobe’s goal], not spot on.

“Second goal off a set piece, that made me nearly vomit.

“With three points we would feel completely different, but pretty much the same game.

“It should feel disappointing. But tomorrow, we have to remember it’s one point gained and maybe take this as positive.”

Klopp also revealed why he substituted Coutinho with 30 minutes left to play, explaining that the Brazilian had felt sick at half-time and could not carry on.

This is a small boost for the Reds, after initial fears that he could have joined Sadio Mane on the treatment table.

Liverpool will be hoping Coutinho is fit to return for their next outing, a tricky away trip to Stoke City, where all three points will be a must.