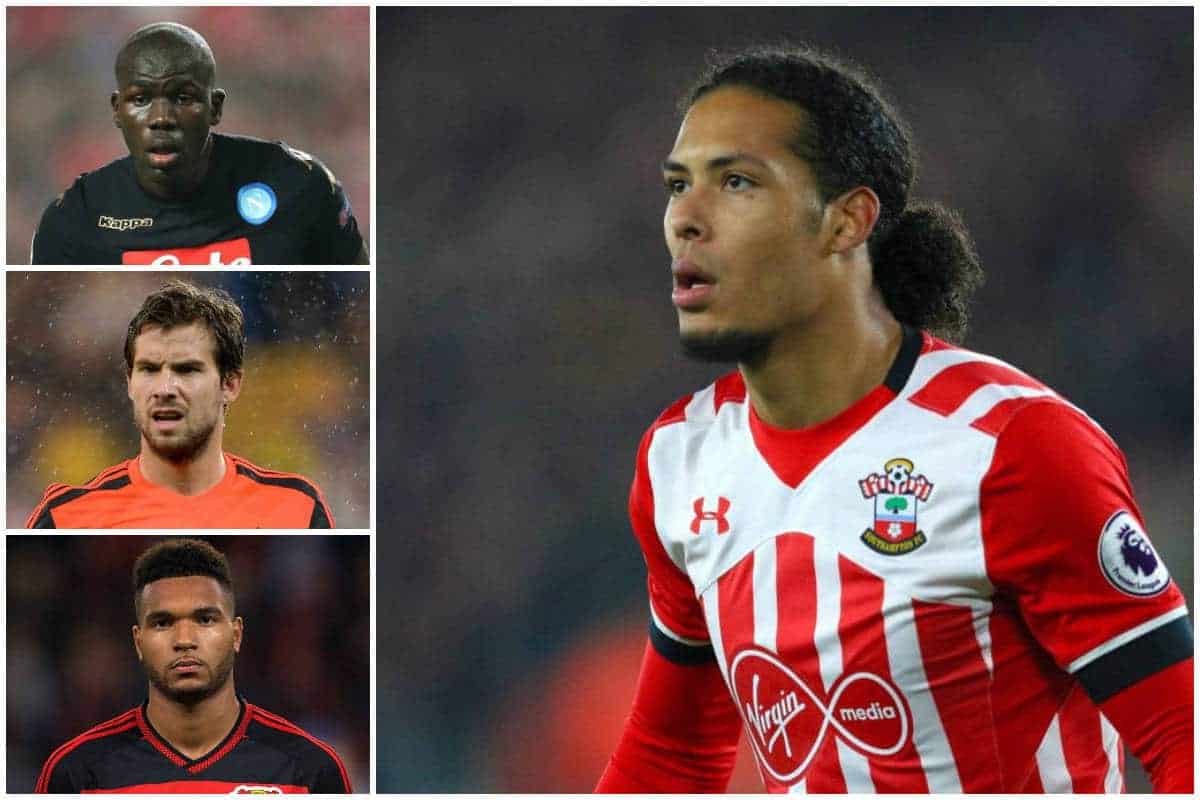 With Southampton centre-back Virgil van Dijk one of the most in-demand – and expensive – targets of the summer, Liverpool would be wise to draw up alternatives.

Van Dijk has been established as Jurgen Klopp‘s priority when looking to strengthen his centre-back ranks in the upcoming transfer market.

The 25-year-old Dutchman has everything Liverpool are looking for at the back: strength, pace, intelligence, leadership and technical quality.

But Van Dijk’s status as one of the leading centre-backs in Europe could make Anfield a difficult sell, with Man City, Chelsea and Arsenal all credited with an interest.

Most recently, Southampton chairman Ralph Krueger told Sky Sports that the club could even turn down a £60 million offer for Van Dijk, which is arguably above the level Liverpool should be paying.

At risk of being out-priced or outpaced, Klopp could look to a host of alternatives to the Saints’ No. 17.

Here are five possible options, including one already reported to be on the radar. Koulibaly has been widely touted as the Reds’ second choice when it comes to bolstering their defence ahead of the 2017/18 campaign.

Having joined Napoli from Genk in 2014, Koulibaly has established himself as one of Serie A’s sleeper hits at centre-back and has helped fuel the Naples side’s title challenge this season.

Standing at 6’5″ and boasting a dominant physicality, Koulibaly has always possessed the raw qualities required to thrive at the top, but after a troubled first season at Napoli his all-round game has improved immeasurably.

He has transformed into an intelligent, front-footed defender, strong in the air and on the ground, and comfortable with the ball at his feet, completing 89.4 percent of his attempted passes this season.

Napoli turned down a £47 million offer for Koulibaly from Chelsea last summer, but stressed they would be willing to sell if a replacement was found, so a move could still be on the cards.

Before leaving Feyenoord for Lazio in 2014, De Vrij was a long-standing target for Liverpool, with Brendan Rodgers scouting the classy centre-back personally during the 2012/13 campaign.

Rodgers opted to sign Mamadou Sakho from Paris Saint-Germain, but with the Ulsterman gone and the No. 3 set to follow, Klopp could turn his attention to De Vrij.

A former midfielder, De Vrij brings a composure to the defensive line that would be perfectly suited to Klopp’s setup, and though he is naturally right-footed, could be a solid partner for Joel Matip.

De Vrij is also a strong defensive talent, possessing an intelligent timing of the tackle and reading of the game off the ball, and he is extremely focused in his efforts.

With Lazio missing out on the Champions League next season, Liverpool could swoop to sign the Netherlands international, who enters the final year of his deal this summer. Another player regularly linked with a move to Merseyside in the past is four-cap Spain international Martinez, who has enjoyed an excellent season with Sociedad in 2016/17.

Though smaller than Koulibaly and De Vrij at 5’11”, Martinez is far from a weak option at the back, pairing an underrated physicality with a high perception.

Martinez is a natural left-sided centre-back, which is something of a rare commodity in the modern game, and playing in a controlling, possession-based system at Sociedad would aid his transition under Klopp.

While his disciplinary record goes against him—picking up 12 yellow cards and one red this season—Martinez is rarely injured and could be a dependable, regular presence at the back for the Reds.

Sociedad can still finish in La Liga’s top five this season, but Martinez could look to make a step up in the summer, with Liverpool an ideal destination. It has been far from the best season for Tah, with Leverkusen fighting against relegation from the Bundesliga, hanging on by the skin of their teeth with a 2-2 draw with Koln on May 13.

Leverkusen have kept just six clean sheets in the league so far, with Tah only contributing to three of those due to a thigh injury that kept him out for two months and hampered his form at the back.

Nevertheless, Tah remains one of the most promising young defenders in Europe: 6’3″, strong on the ground, imposing in the air, deceptively quick and adept operating in a high line.

His bold defensive style does leave him open to error at the back, but at 21 this should be expected, and Klopp could mould him into a top-level option.

Leverkusen avoided ruin this term, but flirting with the drop could see many of their leading talents seek the exit—and if Tah is to leave, he would be a fine addition for the Reds. Christensen finds himself in an interesting position this summer, with the Dane set to head back to Chelsea after two seasons on loan with Gladbach.

Developing into well-rounded centre-back in the Bundesliga, Christensen is composed on the ball and strong in the tackle, with his finesse, agility and eye for a pass honed at Borussia-Park.

Antonio Conte already has an established three-man defensive line in Gary Cahill, David Luiz and Cesar Azpilicueta, with Kurt Zouma and Nathan Ake among his options to deputise.

This could see Christensen on the margins again when he makes his return to Stamford Bridge, and if that is the case Liverpool would be wise to consider approaching their Premier League rivals.

Gladbach sporting director Max Eberl recently revealed the club would be unable to meet a potential £21 million price tag, but this could represent good value for the Reds.