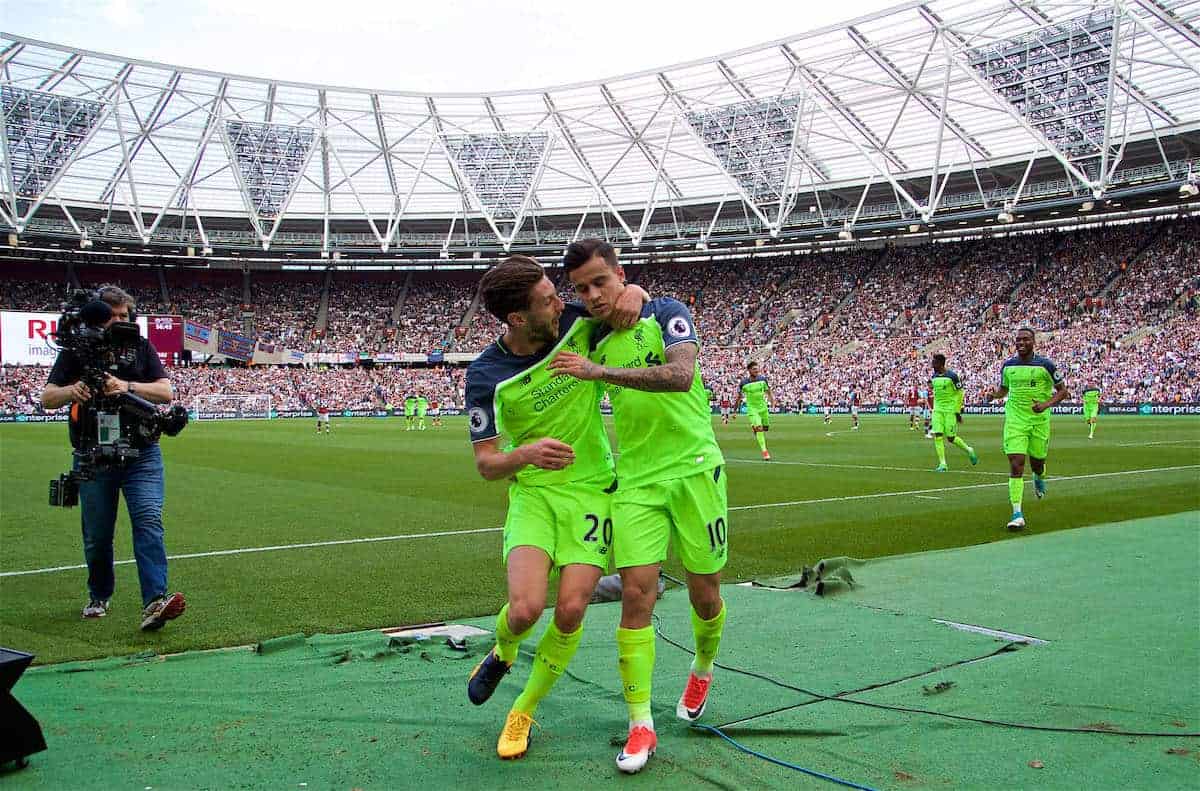 The Reds took a huge step towards securing Champions League qualification by thrashing the Hammers with a clinical display at the London Stadium.

Daniel Sturridge put Liverpool on course for victory after just 35 minutes of his first start Premier League start since January, when he expertly rounded Adrian and slotted home.

A quick-fire brace after half-time from the superb Philippe Coutinho handed the Reds a commanding lead, which Divock Origi extended with a close-range finish to seal an absolutely priceless three points.

It was a huge result for Klopp’s side, who deserve real credit for delivering under immense pressure to keep control of their own destiny for a top-four finish.

Reporters were full of praise for quality of the Reds’ display on a pressure-filled occasion, with some journalists assessing it as Liverpool’s best attacking performance of 2017.

The BBC’s Louise Gwilliam felt Liverpool were back to their “full throttle” best:

After a stumble last week against Southampton – a game devoid of chances – the Liverpool attack were back at full throttle in the capital on Sunday.

The Liverpool Echo’s James Pearce thought it was the Reds’ best attacking display of 2017:

They didn’t just grind it out, they did it in supreme style with the kind of rampant attacking masterclass not seen since the turn of the year.

On the biggest afternoon of their season, Liverpool produced their biggest performance. Sure, it was against risible opposition – West Ham owe their fans an apology for this ‘display’ – but with the pressure on, Jurgen Klopp‘s team delivered.

With the Reds now on the cusp of a Champions League return, the Mail’s Martin Samuel, among others, believes top-four would be a “significant achievement”:

Liverpool went into this season with a zero net spend and a squad considerably weaker than their rivals – a mistake Klopp is unlikely to make twice. They suffered injuries to key players, too, and lost crucial games – often late. Yet here we are.

Looking ahead to the final showdown with Middlesborough, the Telegraph’s Jeremy Wilson noted how the Reds must hold their nerve at Anfield:

The next week will be spent warning against any complacency and, while it is hard to imagine an upset next Sunday, it is still likely to be a more rigorous test than this.

Mastering nerves, even in front of a fervent Anfield crowd, will also be key. Criticised for his apparent inflexibility, for being wedded to 4-3-3 and for being reluctant to start with Daniel Sturridge, he ripped up his blueprint.

Klopp picked the forward, paired him with Divock Origi and introduced a midfield diamond. He moved Coutinho into a deeper role and saw the Brazilian flourish.

It was an inspired move from the German, with Liverpool slow to get into their groove before going ahead then going for the jugular after the interval.

Meanwhile, Jones felt the changes were risky but paid off:

It was a risky strategy against a side who play wing backs, but it worked. Klopp has had his critics in recent weeks, but he got it spot on here. He had his team fired up, organised, up for it.

The Reds looked so much more fluent and effective going forward with the tireless Wijnaldum and Coutinho operating either side of Can and Lallana flourishing at the tip of the diamond.

Meanwhile, Samuel noted how Liverpool were a different force after half-time and attributed that to Klopp’s half-time impact:

Liverpool’s only mistake was getting sucked into playing at West Ham’s pace at times in the first-half. Judging by their energy after half-time, Klopp corrected that with his mid-point team talk and the goals flowed accordingly.

As expected, there was plenty of praise for Coutinho, with journalists eulogising over the way the Brazilian took to his new role and led by example with a sensational performance. Reddy labelled the Brazil international “the architect” of the win:

Coutinho was the architect of the club’s fourth successive away victory in the league: setting the tempo, oiling the supply and making his markers look utterly ridiculous at times.

Brendan Rodgers previously envisioned such a role for the gifted creator, who provided more evidence as to why that’s a solid move.

The Guardian’s Sachin Nakrani assessed how the position brings the best influence out of Coutinho:

As Klopp states, it is a base from which he can move into different areas and what is so mesmeric about watching the Brazilian perform is how he can do something by doing nothing, dropping a shoulder and standing still, forcing defenders off balance before gliding past them with the ease of a cyclist peddling down a ramp.

Jolly, among others, feels the role should become the magician’s main position:

Coutinho became more potent while starting further away from goal. A temporary switch may become permanent.

But since Sadio Mane’s season ending knee injury, Coutinho has stepped up when Liverpool needed it most.

He has responded, scoring six goals in his last seven games for Jurgen Klopp’s men to ease any nerves that they might miss out on top-four berth.

Darren Lewis of the Mirror feels the Reds have a battle on to keep the No.10:

It will be some feat, however, if they can keep the wolf that is Barcelona from the door.

Having already snapped up Luis Suarez, who’d previously pledged his future to Liverpool, their fans can be under no illusions that it will be touch and go this summer – despite the new five-year deal Coutinho signed in January.

There was also praise for Daniel Sturridge’s goal-scoring display, which prompted discussion on the striker’s impact on the Reds’ attack and his future at Anfield.

ESPN’s David Usher was among those to note how Sturridge provided the dimension the Reds have lacked:

Making his first Premier League start since Jan. 2, the England striker showed just what Liverpool have been missing.

His clever movement dragged West Ham‘s defenders all over the place and his ability to keep the ball in tight spaces and make things happen in the penalty area gave the Reds attack a dimension it’s been lacking in recent weeks.

Jolly felt the game simply showed the advantages of playing with a natural striker:

Much of Liverpool’s best football has come because they dispensed with a specialist scorer. This showed the merits of selecting one.

Having Sturridge back in the side makes a big difference and also helped to spark an upturn in form for Divock Origi, who produced his best display in weeks.

Also for ESPN, John Brewin feels that despite handing a reminder of his quality, it is still unlikely Sturridge will be at Anfield next season:

There is little denying, though, the talent that Sturridge possesses, and the prime evidence was provided by the excellence of his goal.

His injury record and Klopp’s preference for a single striker (injuries here forced the employment of a central pair) still make it unlikely that he will remain at Anfield beyond the summer.