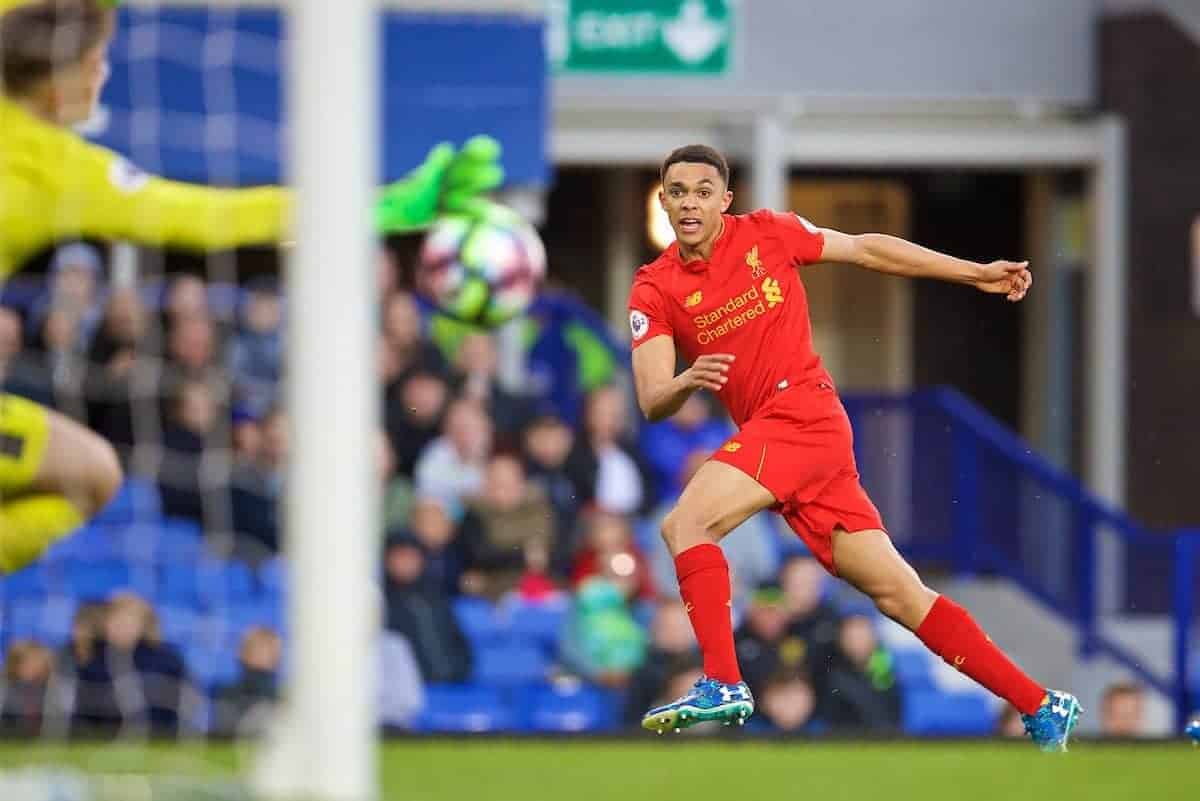 Sheyi Ojo and Trent Alexander-Arnold fired Liverpool’s U23s to a 2-1 win at Everton on Monday night, ending their season on a high.

A big crowd was present at Goodison Park, as the Reds and their Merseyside rivals finished their Premier League 2 campaign.

Everton may have already sealed the title going into the game, with Liverpool third, but that didn’t take too much of an edge off the occasion.

Marko Grujic also started the match, despite the young Serb coming on as a late substitute for the first-team against Southampton on Sunday.

Gethin Jones curled a decent effort wide of Kamil Grabara‘s goal early on, as the hosts made the brighter start to the game.

Liverpool were ahead in the sixth minute, however, with Ojo finishing well after Wilson had robbed Matthew Pennington of possession inside the area.

Ejaria almost scored a sublime solo effort shortly after, but his shot missed the target, following a dazzling, fleet-footed run.

Wilson, who has enjoyed a superb season, stung the palms of Mateusz Hewelt, as the Reds continued their dominance.

Great high press from Harry Wilson and a nice finish from Sheyi Ojo, 0-1 to the young Reds. pic.twitter.com/Y7sQJFkRyA

Kieran Dowell forced Grabara into a smart stop with a whipped free-kick, while at the other end, Hewelt almost allowed the ball to slip under his foot and into the net.

Grabara tipped Joe Williams’ strike over the crossbar on the half-hour mark, and Dowell’s free-kick went inches wide of the post.

Alexander-Arnold’s well-struck free-kick was the last moment of note in an entertaining first-half, although the youngster suffered a nasty fall just before the half-time whistle. Bassala Sambou tested the impressive Grabara soon after the restart, and it was David Unsworth’s who were on top at the start of the second-half.

In the 58th minute, Liverpool’s lead was doubled, though, and it was Alexander-Arnold who found the net. Grujic’s surging run found the marauding right-back, and he finished superbly from a tight angle.

A wonderful run by captain Wilson almost made it 3-0, once again making you wonder why Jurgen Klopp has only used him once this season. He deserves to feel a little hard done by.

Substitute Jordan Williams was slightly fortunate not to be sent-off soon after coming on, with his reckless tackle leading to a scuffle between both sets of players.

Everton were back in it with seven minutes left, with Calum Dyson finding the net via a deflection, leading to a frantic finale.

Despite Everton‘s best efforts to find a late equaliser – Grabara saved excellently to deny Dowell – the Reds held on in impressive fashion, finishing their Premier League 2 campaign in style.

It has been a strong season, with several youngsters making the jump to senior level and some eye-catching football on display.