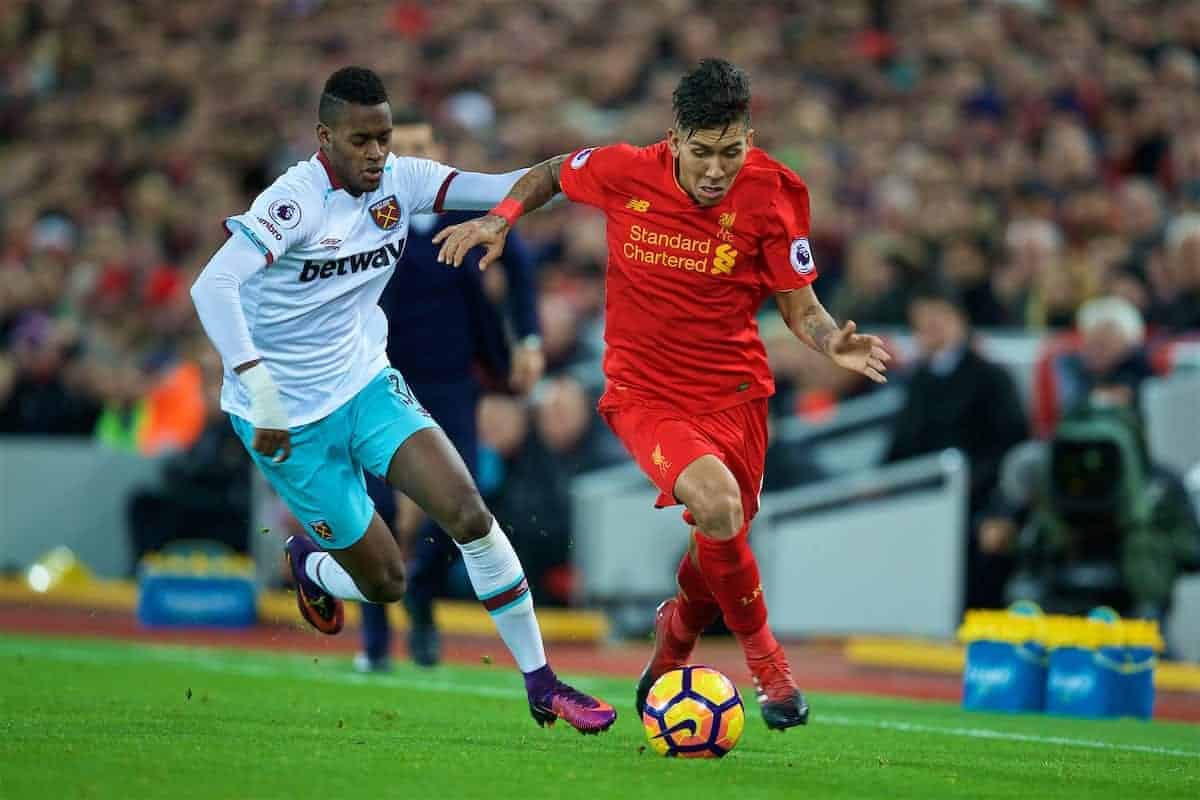 Liverpool must win two from two to secure a top-four finish. Here’s everything you need to know about next opponents West Ham United.

The Hammers were in trouble and looking too close to the drop for comfort, but a recent surge of positivity has them well clear.

Even so, it has been a stop-start season for Slaven Bilic and Co., with some awful luck with injuries playing a part as well as the team’s own horrendous inconsistencies. Having started the season with a back four, the Hammers have since become one of the growing band of teams featuring a back three this term.

Absences at the back have forced Bilic’s hand to an extent, but recently it has been a 3-4-3 setup with full-backs, rather than wide midfielders or converted wingers in the wide zones, and a rotating cast of mostly incompatible forwards leading the line.

They’re direct, aggressive in the air and don’t care in the slightest for possession—but they’ve also only conceded twice in their last five matches, bizarrely both times against the league’s bottom side Sunderland.

Attacking basics. Once upon a time, Liverpool used to celebrate goals—with quite some regularity, actually. In the month from mid-April to mid-May, the Reds have scored three goals. They’ve scored more than that in one match on seven occasions this season, but not since December against Stoke and only once in the last nine have they scored three in a match.

The decline in attacking productivity is pretty much on par with the reduction in movement and tempo in the final third; it’s so much easier to defend against Liverpool when everything is played in front of the opposition back line, with few runs beyond and next to no penalty box presence in open play. Stop Lanzini. If the Reds need a reminder of what damage movement can do, there’s a good chance Manuel Lanzini will provide it. West Ham‘s schemer floats between the lines, drops deep to allow a central midfielder to surge on and exchange passes, and gets himself alongside the striker at times too.

It’s not just a case of marking him, or tackling him quickly, but also making sure the gaps he leaves when he roves out of the middle aren’t filled by another forward-thinking player to sting the Reds on the counter.

Exposed centre-backs. Expect West Ham to sit deep and soak up pressure, and if Liverpool resort to swinging aimless passes into the area, the back three will mop them up all day. But, the wider two of the three, Jose Fonte and James Collins, are not the most agile or fleet-footed.

Klopp should be instructing the likes of Adam Lallana, Philippe Coutinho or Gini Wijnaldum to look to draw them a few yards out of the defensive line… and then strike, surging in behind or playing a killer pass for another runner.

Get that back three out of shape, and chances will come—and despite his clean sheets of late, ‘keeper Darren Randolph is definitely capable of the odd clanger.

That could mean Coutinho playing in a more central role within a midfield diamond, which would be a nice tactical variation from Klopp — something that’s been missing in recent weeks.

Sturridge and Origi would occupy West Ham‘s back three, allowing Coutinho to find space in the pocket between midfield and defence.

For West Ham, Jose Fonte has been a much-improved performer of late and he’ll be one of the three attempting to keep yet another clean sheet.