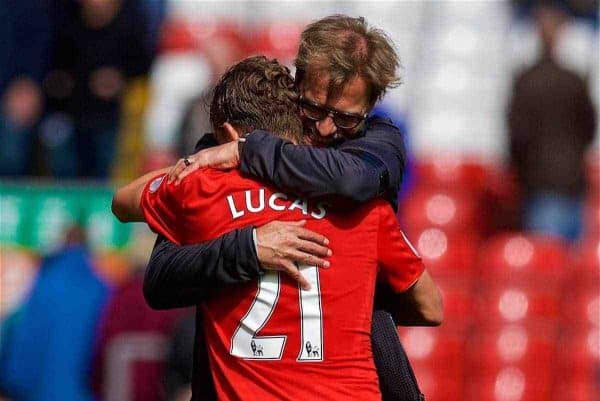 After Lucas Leiva‘s £5 million move from Liverpool to Lazio, Jurgen Klopp has opened the door for the Brazilian to return as a coach in the future.

Lucas left after 10 years on Tuesday, sealing a switch to Rome to join Simone Inzaghi’s Serie A hopefuls having made 346 appearances for the Reds.

The Brazilian’s departure saw him garner widespread praise from supporters, players and ex-players alike, with Lucas fostering a strong bond with Merseyside over the past decade.

The 30-year-old clearly impressed Klopp, too, with the German telling ESPN FC that “the door is always open” for him at Liverpool.

Klopp tipped Lucas, who began working towards his coaching badges at the club’s academy in May, to become “a fantastic coach or manager” at the end of his playing career.

“He loves Liverpool. It’s unbelievable. He comes from Brazil—it’s a nice country and the weather is much better,” he said.

“He could imagine staying in Liverpool for the rest of his life.

“I told him that the door is always open for him after his three years and [if] I’m still here, of course, then we will find a place for him. I’m sure he’ll be a fantastic coach or manager.”

Lucas joining Lazio represents a sensible move for the midfielder, whose role on the pitch was diminishing as Klopp’s Liverpool move forward.

Behind the likes of Jordan Henderson, Emre Can and Georginio Wijnaldum in the pecking order, Lucas sought to leave in search of regular first-team football, Klopp explained.

“Things change but Lucas is a special case. He asked for it,” he continued.

“I would say he’s a friend. He’s a fantastic person. How I know and how he knows, he has a few issues when he’s not playing!

“But we always had a very respectful understanding. It was really good. When he left, we both had a little tear in our eye. It was really a special moment.

“For the team, it’s difficult. It’s the age and it’s life.

“He could sign a long-term contract in Rome and how can I say: ‘You stay here, but I don’t know if you sign a new contract and I don’t know how often you will play next year’. So you need to be honest, especially with a player like him.”

Klopp has already welcomed one ex-Red to his coaching staff in the form of Steven Gerrard.

It could be that the Liverpool legend is followed by his former team-mate in years to come.