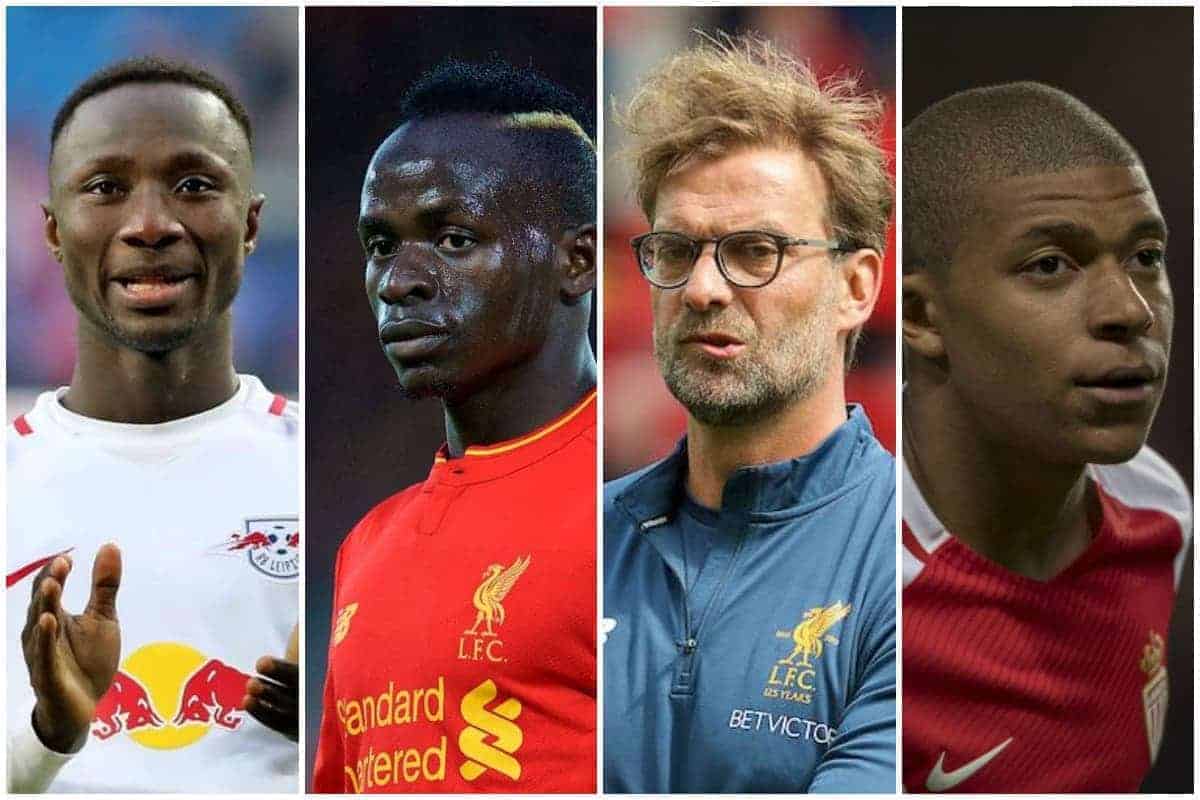 We round up the latest Liverpool transfer news and rumours on Tuesday, with a new name finally emerging as a possible left-back target.

The Reds are set to return for pre-season training on Wednesday, and Jurgen Klopp will still be hoping to add some new faces to his squad in the coming months.

Monday saw the departure of Andre Wisdom for Derby County, while both Adam Bogdan and Sam Hart look to be inching closer to loan moves away.

Here’s the latest from a varied Tuesday, including speculation over Klopp’s own future at Anfield.

Liverpool have reportedly been in pursuit of RB Leipzig midfielder Naby Keita for months, with no breakthrough made as of yet.

The to and fro of this particular deal is certainly growing stale, as while the Reds may be willing to pay up to £70 million for the 22-year-old, Leipzig are not willing to sell him.

And following reports from BILD that Keita had, in fact, not met with the Leipzig hierarchy to discuss his departure, their CEO, Oliver Mintzlaff, has responded.

Mintzlaff described constant speculation as “boring,” insisting that the Bundesliga side are “immune” to approaches for both Keita and winger Emil Forsberg.

Don’t expect that to be the last of this saga, however…

Mamadou Sakho is set to report for pre-season training at Melwood on Wednesday afternoon, but is likely to seal a move away from Merseyside before the start of the campaign.

According to Goal’s Melissa Reddy, the Frenchman has already agreed personal terms with Crystal Palace, having spent the second half of 2016/17 on loan at Selhurst Park.

However, Liverpool’s valuation of the 27-year-old remains steadfast at £30 million, with the Eagles yet to submit a formal offer.

The Reds are left to play a waiting game, but he is reportedly still Palace’s No. 1 target at centre-back, despite Frank de Boer also setting his sights on Ajax’s Joel Veltman and Kenny Tete. Mohamed Salah‘s arrival in a £36.9 million last month has provided Klopp with another top-level wide option, after a struggle to cover for Sadio Mane last season.

However, if reports in Italy are to be believed, the German could be left in the same situation in 2017/18, with Mane on Inter Milan’s radar.

According to La Gazzetta dello Sport, Mane is on a five-man shortlist as Inter look to add another pacy forward to Luciano Spalletti’s ranks.

He is joined by some familiar names in Douglas Costa, Julian Brandt and Yevhen Konoplyanka, along with, confusingly, Marseille’s former Newcastle United winger Florian Thauvin.

Mane is arguably the least likely to leave his club for Inter, with this a near impossible deal for the Serie A side to manoeuvre.

Klopp is very settled in Liverpool, is 12 months into a six-year contract and even suggested in April that he could retire after his time on Merseyside.

That hasn’t deterred former Bayern Munich manager Ottmar Hitzfeld from claiming Klopp will join the Bavarian giants in the future, however.

“Jurgen Klopp will always be a candidate for the Bayern job,” he told T-Online.

“He knows the Bundesliga, he won the league and also the German Cup [with Dortmund]. I think and expect him to be the FC Bayern coach one day.”

However, Hitzfeld did also predict Klopp would win the Premier League with Liverpool before leaving, so there’s at least something to look forward to if he’s right. Liverpool have rightly thrown their hat in the ring if Monaco forward Kylian Mbappe opts to move to England, joining a host of Europe’s top clubs in pursuit of the 18-year-old.

However, according to French publication L’Equipe, Mbappe and his father have now met with Paris Saint-Germain’s president Nasser al-Khelaifi and sporting director Antero Henrique to discuss a possible switch.

They claim that PSG are now in pole position to sign the wonderkid, who will no doubt draw record-breaking bids following his 27-goal, 17-assist campaign with Monaco in 2017/18.

It shouldn’t be considered a major blow for Liverpool if Mbappe does join the Ligue 1 giants, of course, as they are unlikely to be a top priority for the France international.

But with Klopp not looking to add another striker to his squad this summer if he can’t sign Mbappe, it seems like his forward options are now set.

Given the amount of representation Liverpool have in the media, a host of ex-Reds have been giving their opinions on the Reds’ summer business of late—most notoriously, perhaps, Steve Nicol.

One such figure is Didi Hamann, who spoke to Sky Sports to provide his view on Liverpool’s hopes for the transfer window.

“I think they need at least two or three because there are still areas of the team that need addressing,” he said.

“If you look at the left-back position, I do not think that they should be going into the season with Milner at left-back.

“He has been a tremendous player for [Man] City and Liverpool, but he is not a left-back, so I think the left-back position has to be addressed.”

Fortunately for Didi, another left-back has reportedly emerged on Klopp’s radar…

However, they also claim that Dalbert has already agreed a five-year deal with Inter, though Nice are holding out for a fee of around £26 million for the 23-year-old Brazilian.