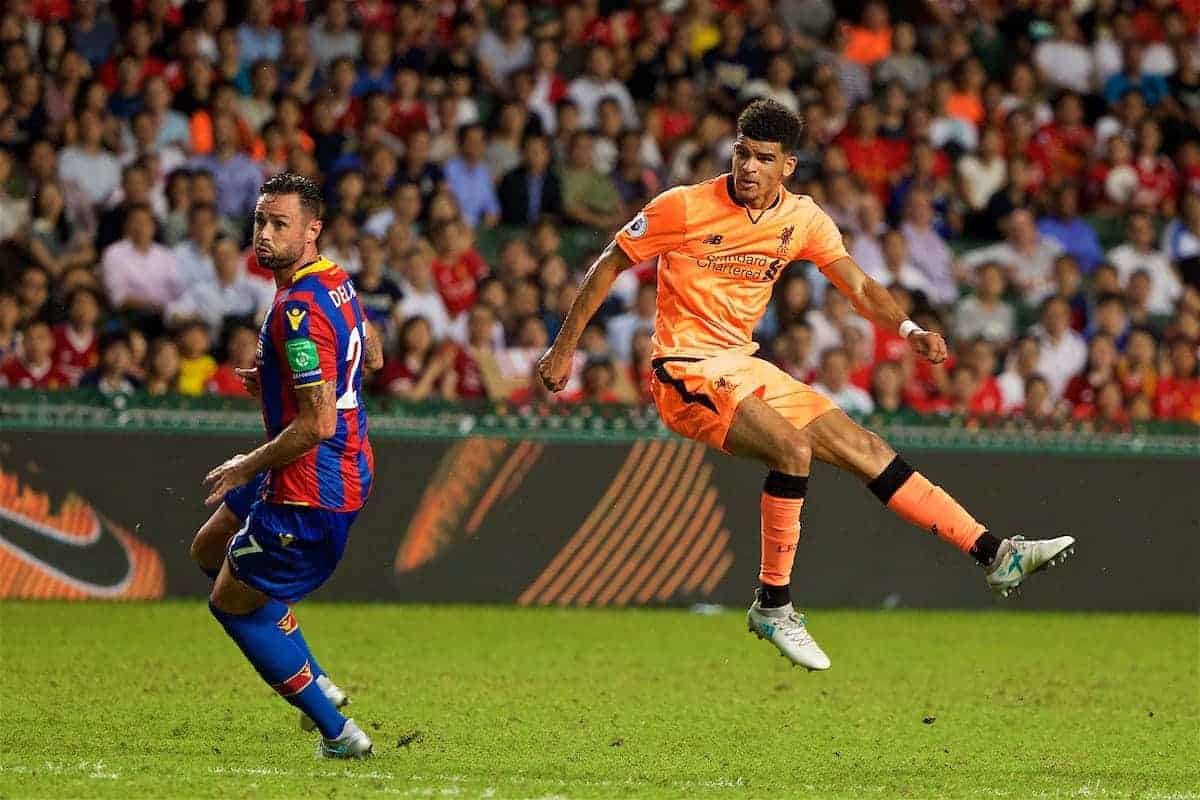 Goals from Liverpool’s young strike pairing ensured a 2-0 victory over Crystal Palace and a place in the final of the Premier League Asia Trophy.

After a two-game domestic jaunt that saw a win away to Tranmere Rovers and a draw with Wigan Athletic, the Reds headed to Hong Kong for the Premier League Asia Trophy.

Taking on Palace at the Hong Kong Stadium, Liverpool were given a taste of things to come in one month’s time, with a clash with Frank de Boer’s Eagles set for August 19 in the English top flight.

Further down the road in their pre-season preparations, the Reds were able to call upon the likes of Mohamed Salah, Daniel Sturridge and Roberto Firmino in the Far East.

With a final against Leicester City on the cards, Liverpool made sure their presence was felt. With Palace playing out their first game of pre-season, Liverpool began the afternoon in control.

Sturridge almost got them off the mark after great work from Trent Alexander-Arnold and Ben Woodburn, but the striker’s effort was blocked by boyhood Reds supporter Scott Dann.

The Eagles did threaten at the other end before the half-hour mark, with Keshi Anderson drawing a save from Simon Mignolet and Christian Benteke’s follow-up header blocked to divert it wide.

Woodburn dictated play from his role in the Reds’ midfield throughout, and the teenager almost laid the ball through for Sturridge in the Palace penalty area, but the No. 15 could get it out of his feet quick enough.

The striker had the best opportunity of the half soon after, however, cutting in from the left to send a low, right-footed shot that Wayne Hennessey tipped out on the cusp of half-time. With the tournament imposing ridiculous rules for substitutions, Klopp made four changes at half-time, four after two minutes and his final two in the 50th minute.

This left only Loris Karius on the sidelines, with the Reds spending the second half a new-look outfit, with Philippe Coutinho the star name having replaced Firmino.

It was two of Klopp’s attackers who combined for the opener, however, with Divock Origi‘s flick sending the ball into the path of Dominic Solanke on the turn, with the 19-year-old firing a powerful effort into the back of the net from range.

After notching a sensational goal against Tranmere earlier in pre-season, Marko Grujic attempted to better Solanke from range, but his sweet strike soared wide of the post.

The Reds did have their second of the night with just over 10 minutes to go, with Origi sending it home from the edge of the six-yard box after Coutinho’s shot was blocked.

That was enough to seal the victory for Klopp’s side, who take on Leicester in the final on Saturday.

Ibrahima Konate has already made a big impression – “One thing Ibou has is legs!”