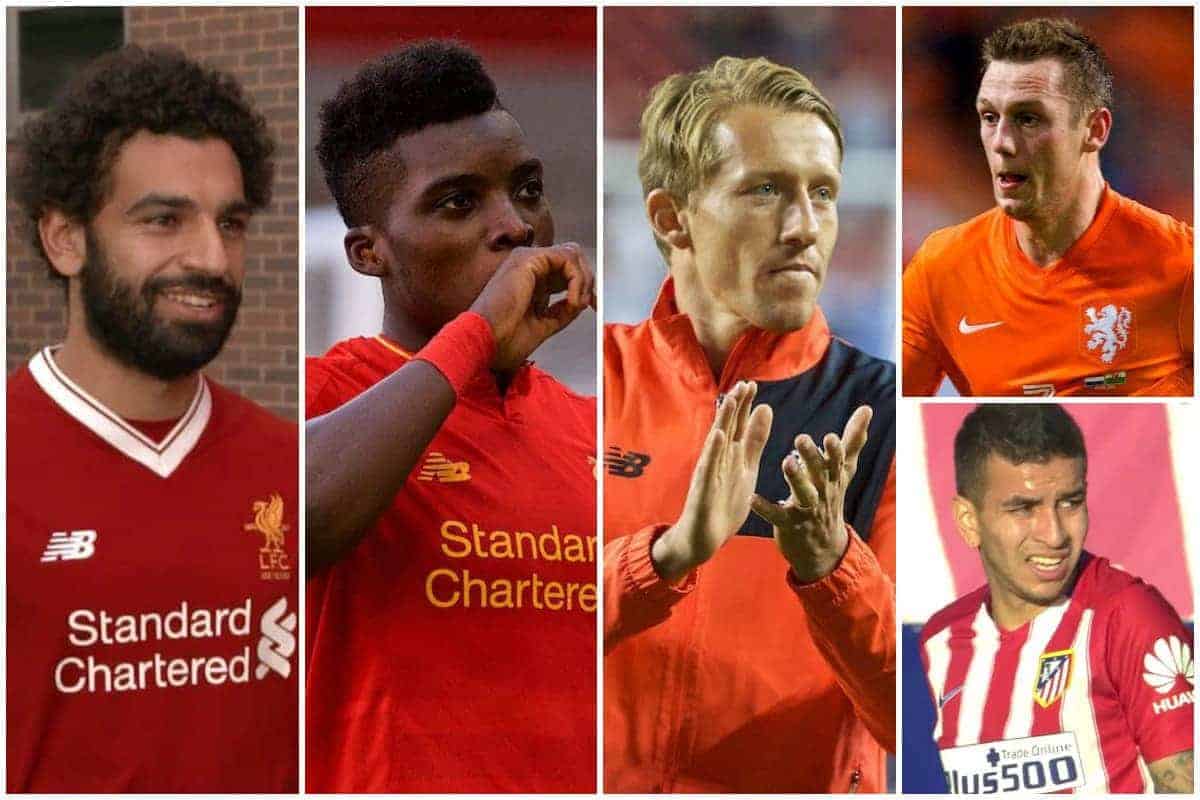 Reaching the midweek stage, we continue to round up the latest Liverpool transfer news and rumours as Jurgen Klopp‘s side kick off pre-season.

The Reds take on Tranmere Rovers at Prenton Park on Wednesday night, looking to get their summer preparations off to a strong start.

Klopp will be able to call upon the majority of his first-team squad, with Liverpool already in great condition, though the German plots to bolster the side further this transfer window.

Here’s the latest from the rumour mill on Wednesday, including why one of Klopp’s key men won’t be available in Birkenhead. Mohamed Salah became the Reds’ second signing of the summer when he sealed his £36.9 million move from AS Roma towards the end of June.

But despite joining fellow new arrival Dominic Solanke for pre-season training at Melwood on Saturday, the Egypt winger is still unable to turn out for the Reds.

Liverpool have confirmed the 25-year-old has made the trip to Paris in order to finalise his work permit application, with Salah forced to leave the country and then return to activate this.

This means Salah will miss the opening pre-season friendly at Tranmere, but according to the Liverpool Echo, the club are hopeful he can make his first appearance on Friday.

That would come away to Wigan Athletic, providing supporters with a long-awaited glimpse of his talents. Tuesday saw suggestions that Middlesbrough had moved ahead of Newcastle United in the race to sign Sheyi Ojo on a season-long loan.

These reports came, however, from the infamous Sky sources, typically cobbled together from hearsay on social media, casting a measure of doubt over Ojo’s supposed destination.

However, the Liverpool Echo have now corroborated these claims, saying Klopp is “considering” a deal with the Championship side.

“The Reds are open to the idea of Ojo continuing his development under the guidance of Garry Monk,” they report, “and Boro are willing to give him the regular first-team football he needs.”

Having rejected advances from elsewhere, namely Newcastle and Burnley, it seems Liverpool are set to send Ojo to Riverside for the season.

Lucas on the Way to Rome? Another player likely to leave this summer, but on a permanent deal, is Lucas Leiva, after the Brazilian marked a decade on Merseyside at the end of last season.

The 30-year-old is set to find himself low down the pecking order in midfield in 2017/18, particularly if Klopp succeeds in signing Naby Keita from RB Leipzig.

And according to Italian outlet Calcio Mercato, Serie A side Lazio are considering a move for Liverpool’s No. 21 as a replacement for Lucas Biglia, who is on the verge of joining AC Milan.

Lazio manager Simone Inzaghi is said to have put Lucas “on top of the wish list,” with the Reds expected to allow him to depart “with relative ease” despite having one year left on his contract.

Lucas has been regularly linked with a switch to the Italian top flight, with moves to Inter Milan and Napoli failing to come to fruition, but this summer may be the right time to move.

Reds ‘In Talks’ Over 2 Lazio Defenders

If Lucas does join Lazio, it may not be the last business the Reds discuss with the Rome club, if further reports in Italy are to be believed.

According to Il Messaggro, the Reds are interested in signing Lazio centre-backs Stefan de Vrij and Wallace.

De Vrij has already been touted as a possible summer target for the Reds, but had dropped off the radar with his compatriot, Virgil van Dijk, Klopp’s priority.

However, with Van Dijk joining the Southampton squad for their pre-season training camp in Austria this month, it could be that Liverpool have given up the chase.

If that is the case De Vrij and Wallace could be seen as alternatives, and with the former entering the final year of his contract this summer, he could be a bargain signing. Finally, Tuesday saw dubious reports claim Liverpool were pursuing a deal for Atletico Madrid forward Angel Correa, even suggesting they had offered him a five-year contract.

However, Spanish publication AS have addressed this speculation, reporting that Correa won’t leave Atletico this summer.

They first underline the 22-year-old’s £25 million release clause, before claiming that Correa has held productive talks with the Liga side, convincing him to remain in Madrid.

This is largely due to the transfer ban Atletico are currently serving, with Diego Simeone unable to make any immediate additions to his squad.

But Correa could be able to leave in January, AS suggest, which may be a realistic development given Chelsea‘s Diego Costa is expected to rejoin Atletico in six months.