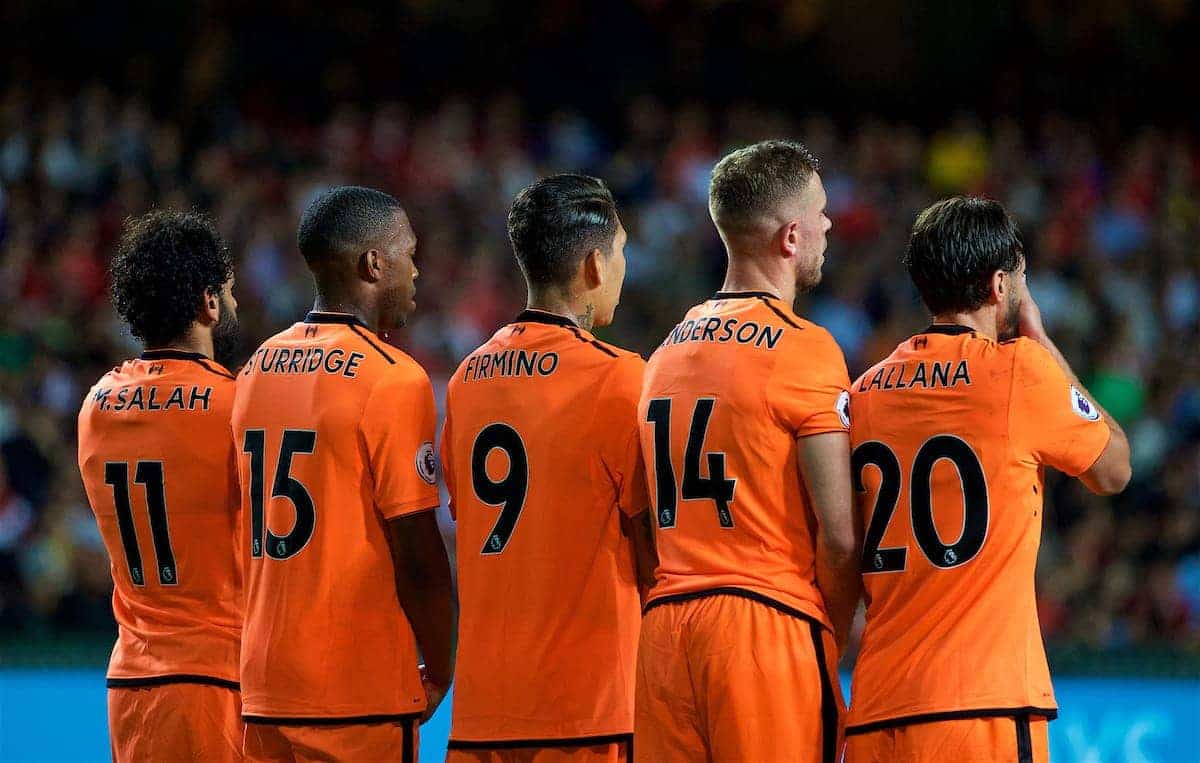 A string of good performances, and second half goals from Dominic Solanke and Divock Origi, saw Liverpool into the Asia Trophy final.

The speed of Salah The first half of this game was all about the speed of Salah. He constantly ran directly at the Palace defenders as they attempted to stop him by hook or by crook, regularly resorting to fouling him – leading to two bookings.

But on other occasions, they couldn’t catch him even to bring him down as he sprinted away from his marker with ease.

It looks like he’ll need no bedding in period to get up to speed with the way Jurgen Klopp‘s side play, and he’ll provide the team with a similar weapon to the one they already possess in the shape of Sadio Mane.

Playing from the right, Salah looked to cut inside and shoot on his favoured left foot, and had one of the best early efforts of the game but saw his shot sail over.

He really came into his own when helping the team break from their own half, and if his final ball becomes sharper he could post big numbers in terms of goals and assists this season.

“He’s quicker than I thought!” summarised Klopp after the game.

On first impressions, Liverpool’s new signing in the forward department is the complete attacker, and on this showing he could be even further up the pecking order than Divock Origi.

He gave a good demonstration of his all-round game playing in a role next to the Belgian striker, where he also helped out the midfield in both defence and attack.

He scored the opening goal of the game from this lurking position, receiving the ball on the edge of the area before drilling the ball into the bottom corner without even thinking about it.

The 19-year-old sometimes broke ahead of Origi too, looking to get in behind the defence.

He was less involved as the game was broken up by Palace substitutions towards the end of the game, but he still showed the odd glimpse of what Liverpool can expect from their new man this season.

Ben Woodburn started the game in the midfield role which Philippe Coutinho is likely to take up this season.

The 17-year-old appears to be following his team-mate around the pitch, having made appearances in the wide left role last season, he’s now moved, as the Brazilian did at the end of last season, into midfield.

Both could still get games out wide on the left, as Coutinho did for a few minutes here when he replaced Firmino just after half time, and this versatility could mean Woodburn is Klopp’s go-to option from the bench when the No 10 needs a rest.

Against Palace, Woodburn was all over the pitch. He dropped back to receive the ball from the defence when Jordan Henderson was elsewhere, and also looked to get forward when the opportunity arose.

His passing was a particular highlight, and the way he was able to pick out his team-mates with both long and short balls shows why Klopp has such faith in him.

With Nathaniel Clyne rule out of both Asia Trophy games, Trent Alexander-Arnold will be given the opportunity to impress the manager ahead of their trip to Germany later in the month.

It’s become accepted that Clyne is the first team right back seeing as he’s has had very little competition for this role during his time at the club, but the emergence of Trent could see his place threatened.

The 18-year-old started to the right of fellow under-23 regular Joe Gomez, and the pair were tested by a Palace attack which included Wilfried Zaha and Christian Benteke.

Going forward, Trent was always an option, and after disappointing himself by letting a ball run out for a goal kick early on, he went from strength to strength.

The next chance he had to cross the ball he found Daniel Sturridge following good work from Woodburn, and moments later he was back in his own half defending well against the tricky Wilfried Zaha.

He was a regular outlet for Henderson’s long passes, and he found plenty of space out wide to the side of the Palace back three.

It was another encouraging display from the teenager who should be challenging Clyne’s first team spot once competitive games start. The Hong Kong Stadium was awash with Liverpool red ahead of this game.

The match had the feel of a home fixture for Klopp’s side as their pre-season fixtures often can, such is their popularity abroad.

They even belted out You’ll Never Walk Alone over the tannoy prior to kickoff.

It’s likely to be the same on Saturday when they face Leicester in the “final”, but the fans might be hoping that their heroes wear their traditional red shirts rather than the fluorescent orange outfits which very much on display in this game.

The club had merchandising stalls set up to take full advantage of the situation and get a few extra pennies in the coffers as they look to improve the squad further this summer.

There had been concerns that the team have unable to train as they wanted to due to torrential rain on their arrival, and there were worries about the state of the pitch used for these games, but this was played down by Henderson after the game.

But overall the club will see this as a good opportunity to reach out to their fans in this part of the world, and they’ll hope to make the next leg of their pre-season tour with the Asia Trophy in the bag.