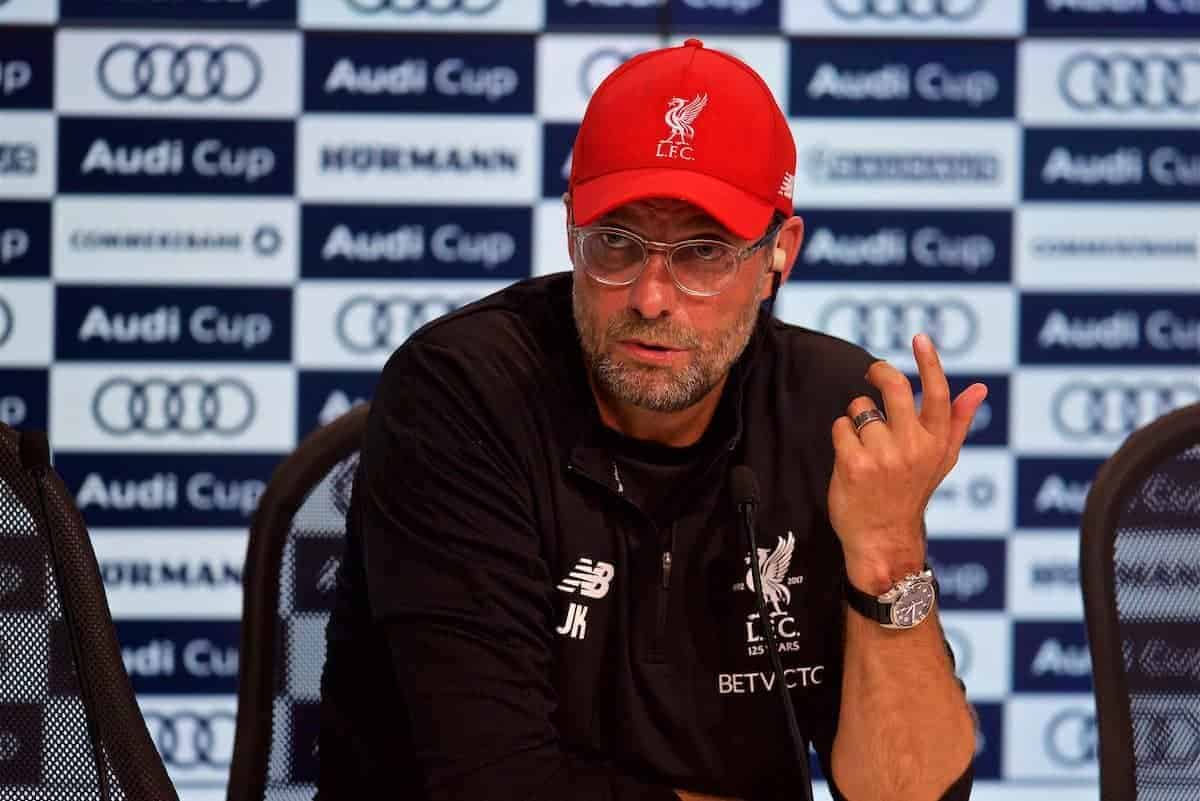 4-2-3-1 was Jurgen Klopp‘s preferred formation until a change to 4-3-3 for last season; could it make a return this season, especially in the absence of Philippe Coutinho at the moment?

Could a change of formation get more out of Liverpool’s current crop of players?

Liverpool have started the season with a similar tactical setup to the one which ended the last.

It’s roughly a 4-3-3 with one holding player in midfield and two attacking midfield players whose job it is to support the three forwards when the team have possession.

This can sometimes lead to a shape which looks like a 4-1-4-1, but regardless of the fluid movements of the players throughout a game, there tends to be one striker and one holding midfielder acting as focal points in the centre of the park.

The closest Jurgen Klopp‘s Liverpool side come to having two midfielders in the deeper role is when one of the attacking pair drops back to help Jordan Henderson, as was the case with Emre Can towards the end of last season.

This is usually down to the fact they are playing more of a box-to-box role as opposed to being the deep double pivot Klopp often utilised during his time at Borussia Dortmund.

However, as the Philippe Coutinho saga rumbles on and the side are obviously lacking creativity in midfield, the team could be better off trying Klopp’s old 4-2-3-1 formation.

This shape would allow either Roberto Firmino or Dominic Solanke to play as the second striker (No. 10) in the middle of the three, which would facilitate the use of another player to come in and lead the line.

Liverpool have plenty in reserve in this area with Daniel Sturridge, Divock Origi, and Danny Ings all able to operate in the centre forward role. If Klopp doesn’t fancy any of these he could use Firmino and Solanke as a pair; both of whom have played the No. 10 role in the past.

Solanke operated successfully in the position during England under-20s’ world cup win this summer, where he played behind the likes of Adam Armstrong or Dominic Calvert Lewin.

Liverpool’s new signing was named player of the tournament for his performances in the role, and a lot of his work off the ball in this competition would have pleased Klopp too.

Firmino often played as an attacking midfielder during his time at Hoffenheim, and his most successful season at the club came in the 2013/14 campaign when he was playing behind centre forward Anthony Modeste.

The Brazilian racked up 16 goals and 13 assists during that campaign, and his performances from then on began to alert other clubs across the continent to his talent.

During pre-season, Solanke played a few minutes behind a striker in a position which wasn’t too far removed from Adam Lallana‘s usual role.

The 19-year-old’s natural strengths lend themselves to a different kind of performance from what would be seen from Lallana, but in terms of the average positions on the pitch there wasn’t much difference between the two.

It was somewhere between third midfielder and second striker. Depending on the nature of the other midfielders around the attack minded Solanke, a 1-2 midfield can easily become a 2-1, so 4-3-3 becomes 4-2-3-1.

Former Liverpool manager Brendan Rodgers once explained why a team will sometimes switch from one player to two at the base of midfield.

The Northern Irishman would use a double pivot if he thought two of the players in the three didn’t have the capacity to recover—ie. they weren’t natural box-to-box midfielders.

Lucas Leiva might have been an example of such a player, as would Steven Gerrard later on in his career (though Gerrard might have been better playing out his years as a No. 10 or support striker, than as a deep-lying midfielder).

But as well as giving more protection to the defence and insurance to the midfield, the use of a double pivot can also free up a No. 10, and this is where Liverpool’s current conundrum could be solved.

When Solanke entered the fray against Crystal Palace he joined Firmino up front, and the pair would alternate between striker and the support-striker/attacking-midfield roles in a fairly fluid system.

Liverpool now 4231, with Firmino behind Solanke in the centre, Mane on right and Salah on left.https://t.co/aHSB7InTku

This shape eventually led to the goal when some counter-pressing from the Englishman saw the ball rebound into the path of an alert Sadio Mane to give Liverpool the three points.

It was reminiscent of the performances Solanke put in for England during the summer, and is something Liverpool fans will enjoy seeing more of as this fixture packed season rumbles on. If/when Coutinho does return to the fold then could well revert to a 4-3-3, and the progression of Ben Woodburn could also see him used in a creative midfield role.

The Welshman appears to be mirroring Coutinho and as the Brazilian dropped back into the centre from the position on the left of the attacking three, so did Woodburn.

Regardless of Coutinho’s future, it’s still handy to have backup formations which can get the most from other players in the squad and the 4-2-3-1 should definitely be used this season.