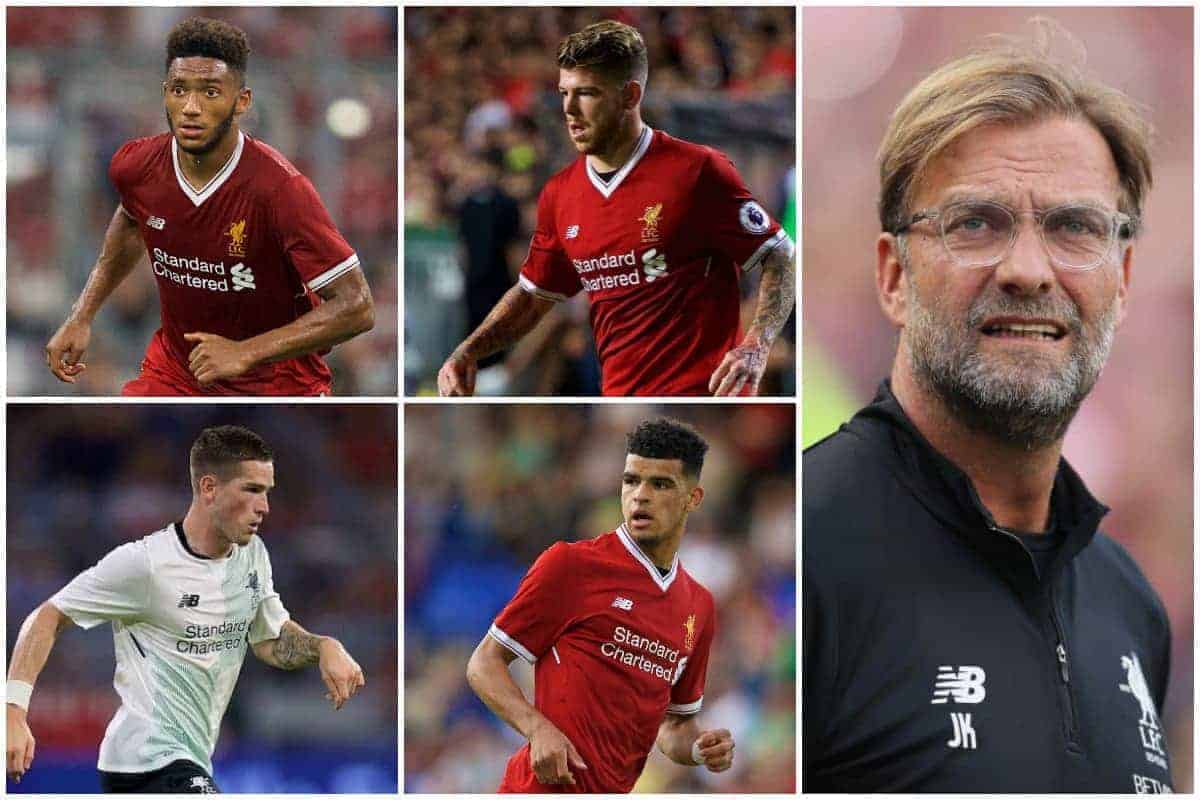 After eight games, six wins and four countries, Liverpool have brought their pre-season preparations to a close, as the 2017/18 campaign looms.

The Reds finished the summer with a 3-1 victory over Athletic Bilbao in Dublin, having secured previous wins over Tranmere Rovers, Crystal Palace, Leicester City, Hertha Berlin and Bayern Munich.

They also drew 1-1 with Wigan Athletic in July, and fell to a penalty shootout defeat to Atletico Madrid in the ‘final’ of the Audi Cup in Munich.

Jurgen Klopp began the summer looking for his side to find fitness and fluency, while plotting to experiment with a variety of different systems and tweaked roles, building on last season.

So what has Liverpool’s pre-season revealed about the German’s current squad, and the campaign ahead?

Liverpool have spent the summer pursuing a record deal to sign Southampton centre-back Virgil van Dijk but, so far, they have been unable to bring the Dutchman to Anfield.

While Van Dijk continues to train alone in Hampshire, having told the Saints of his desire to leave, Klopp has been forced to forge on without one of his primary targets.

Unfortunately, this has seen Liverpool’s defensive issues spill over from last season, with this particularly clear at centre-back.

Chiefly, this has come with a discord between Klopp’s first-choice duo, with Dejan Lovren still struggling for consistency as Joel Matip‘s partner at the back.

But there also remain issues with Joe Gomez‘s form in what is deemed his natural role, with the youngster looking ill at ease in possession and under pressure, despite his obvious potential.

Gomez can serve as able backup to Lovren, Matip and Ragnar Klavan, but Klopp still needs to add another centre-back to his ranks before August 31.

Ahead of the summer transfer window, left-back was widely regarded as one of the key positions Klopp needed to strengthen in order to push forward.

On July 21, in came Scotland international Andrew Robertson, with the 23-year-old joining from Hull City in a deal worth an initial £8 million, arriving to compete with James Milner.

But with Robertson still coming to terms with the demands of Klopp’s system, he is yet to establish himself at left-back, with Alberto Moreno making a surprise resurgence in August.

Speaking after the victory over Bilbao, Klopp said Moreno “is 100 percent back,” suggesting the Spaniard may have earned a stay of execution, while Milner was deployed in midfield in Dublin.

Heading into the season opener away to Watford on August 12, it is still unclear who will be Klopp’s starting left-back.

Over the eight games in pre-season, Klopp utilised 34 different players, as he provided opportunities for fringe figures and youngsters in the early weeks of the summer.

By the time Liverpool took to the Aviva Stadium for their clash with Bilbao, three of those—Lucas Leiva, Kevin Stewart and Pedro Chirivella—had moved on, and two more—Sheyi Ojo and Lazar Markovic—have dropped out of the picture.

More worryingly, five players didn’t make the trip to Dublin due to injury, with Adam Lallana‘s potential three-month layoff with a thigh injury the most concerning.

Nathaniel Clyne played just 45 minutes throughout pre-season due to hamstring and back problems, while Lovren, Gomez, Milner, Danny Ward, Loris Karius, Ovie Ejaria and Divock Origi all spent time out.

Missing Clyne, Lallana, Jordan Henderson, Philippe Coutinho and Daniel Sturridge at the Aviva, it is clear that Liverpool will need a bigger squad as they fight on four fronts in 2017/18.

One player who could bolster Klopp’s ranks for the upcoming campaign is 20-year-old academy winger Ryan Kent, who made a strong claim to a senior role in pre-season.

After loan spells with Coventry City and Barnsley, Kent looked to be way down the pecking order, as the likes of Ojo, Ben Woodburn and Harry Wilson garnered favour on Merseyside.

But it is Kent who prevailed out wide over the summer, with his pace, skill and comfort with both feet ensuring he is a valuable option on either flank, and one who should stay at Anfield this season.

Hull City and Leeds United both had offers accepted for the youngster, while a host of other Championship sides were credited with an interest.

But with Klopp enthusing how Kent had “completely showed up” over pre-season, it could well be that the German is now considering his No. 40 for a first-team role.

Solanke Puts Himself in the Frame When Dominic Solanke made the move to Liverpool from Chelsea at the beginning of July, the England U20 striker was expected to begin his Anfield career with the Reds’ U23s.

But after making an impression the first days of training at Melwood, and with Origi yet to return following a summer with the Belgium squad, he was given a chance against Tranmere.

While he didn’t get his name on the scoresheet at Prenton Park, it was his effort that was parried into the path of Chirivella, who tucked away Liverpool’s third on the way to a 4-0 win.

Solanke went on to feature in all of the Reds’ pre-season games, scoring three goals and assisting two, averaging a direct goal contribution every 62.6 minutes.

Already a well-round centre-forward option, capable of dropping deep, drifting wide and spearheading attacks on his own, Solanke looks to be an ideal deputy for Klopp’s leading No. 9, Firmino.

It may well be that, with Origi struggling and Sturridge out injured, Solanke continues to impose himself when the campaign kicks off at Vicarage Road.