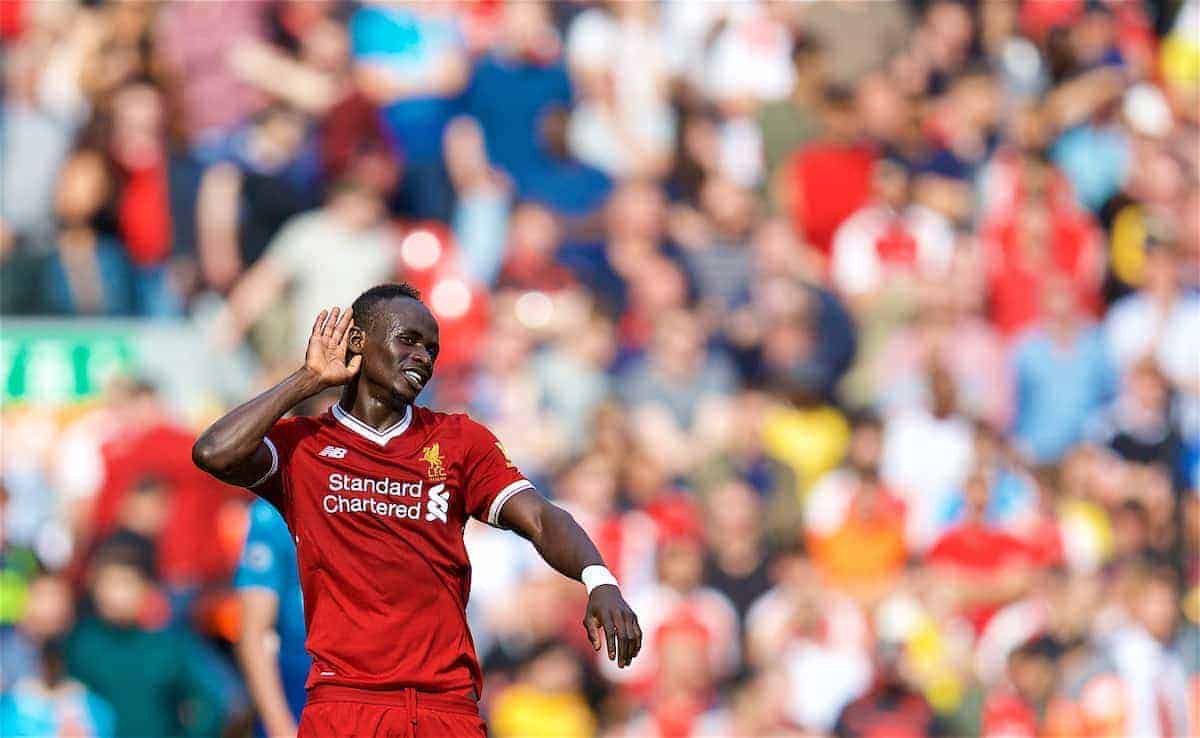 Liverpool continued their bright start to the 2017/18 season with a huge 4-0 victory over Arsenal in the third league game of the season.

Liverpool continued their unbeaten start to the 2017/18 campaign with a huge 4-0 victory over Arsenal on Sunday afternoon.

Pre-match, the biggest surprise was Simon Mignolet‘s absence from the squad, as Loris Karius made his first start since December 2016 and Danny Ward was handed a place on the substitutes bench.

Joe Gomez turned provider for Liverpool’s opener as he set up Roberto Firmino following a dominant start from the hosts.

Sadio Mane doubled the Reds’ lead shortly before half-time to round of a terrific first-half performance from the hosts.

Liverpool started off the second-half with a 2-0 lead but they extended it shortly afterwards when Mo Salah stole possession to create a one-on-one situation and duly dispatched the Reds’ third.

There were further opportunities to score but Liverpool eventually saw out an impressive 4-0 victory.

Here are all the reactions from supporters throughout the game.

There were a few surprises in the starting line-up

LFC bombshell!mignolet dropped from the squad?????the timing seems to be a bit mad.

Two strong-looking starting lineups for both sides, but a shame to see no TAA. Surprised Lacazette and Kolasinac aren't starting, though.

“Can’t understand dropping Trent and Mignolet. Both have been solid so far.” – Jamie Grogan on Facebook.

Migs not even on the bench. That's not rotation then. That's a whole new level of dropping

“A keeper who only shows improvement when benched is no long-term solution for Liverpool. Karius gets his second chance! The lad is no bench warmer. Justified.” – The_Red_Army on the forums.

Still cant believe … Salah missed that.. what a delightful ball that was from Can !! #LFC #LIVARS

Emre Can is unbelievable! #LFC @LFC

Emre Can hitting a new level this season so far ?? #LFC #EmreCan

Roberto Firmino's done very well for #LFC since we signed him, work rate, goals, pace everything really! Loves scoring against Arsenal 4in4!

Nice cross from Gomez that. Good work down the right and then crosses onto Firmino's head with his weaker foot.

And at half-time, Liverpool fans were delighted with the team’s performance…

Our midfield has been superb. Midfield axis of Henderson, Can, Wijnaldum.

“We are just sensational. The Mane man! Henderson’s best game? Wijnaldum, wow!” – Akie174 on the forums.

We have some frightening players in attacking play

And when Salah extended the Reds’ lead, there were celebrations…

Salah made the sprint reached the goal and scored while bellerin still searching for the ball ???#lfc #liverpoolvsarsenal

WHAT AN ABSOLUTELY BEAUTIFUL GOAL!!!

That might just be my favourite goal of the game. Delighted to see Daniel Sturridge get on the score-sheet! His 99th club goal?

Can we play Arsenal every week?

“Liverpool have been absolutely brilliant, no question. The pace, the power, the movement.” – Umer Saleem on Facebook.

The definition of domination that game! We made Arsenal look like fools

“Just imagine when we get Coutinho back into this team. Wow! We can’t let him go.” – Dubai Reds on the forums.

“Amazing display. This is the real Liverpool. Wonderful first-half. Mane was brilliant and Salah as well. Our attack is the best in the Premier League.” – Kenneth Martinez on Facebook.

“Our best performances seem to come against Arsenal. We are simply irresistible right now!” – Steinhaus on the forums.

“Can was superb. I’ve always been a fan of his. Has he convinced the doubters yet?” – John B on the forums.

Can't see Coutinho getting a game in this team.

A complete performance, on and off the pitch. Thank you for the volume levels today. Anfield felt like an absolute fortress… pic.twitter.com/ULlDpI9HfH