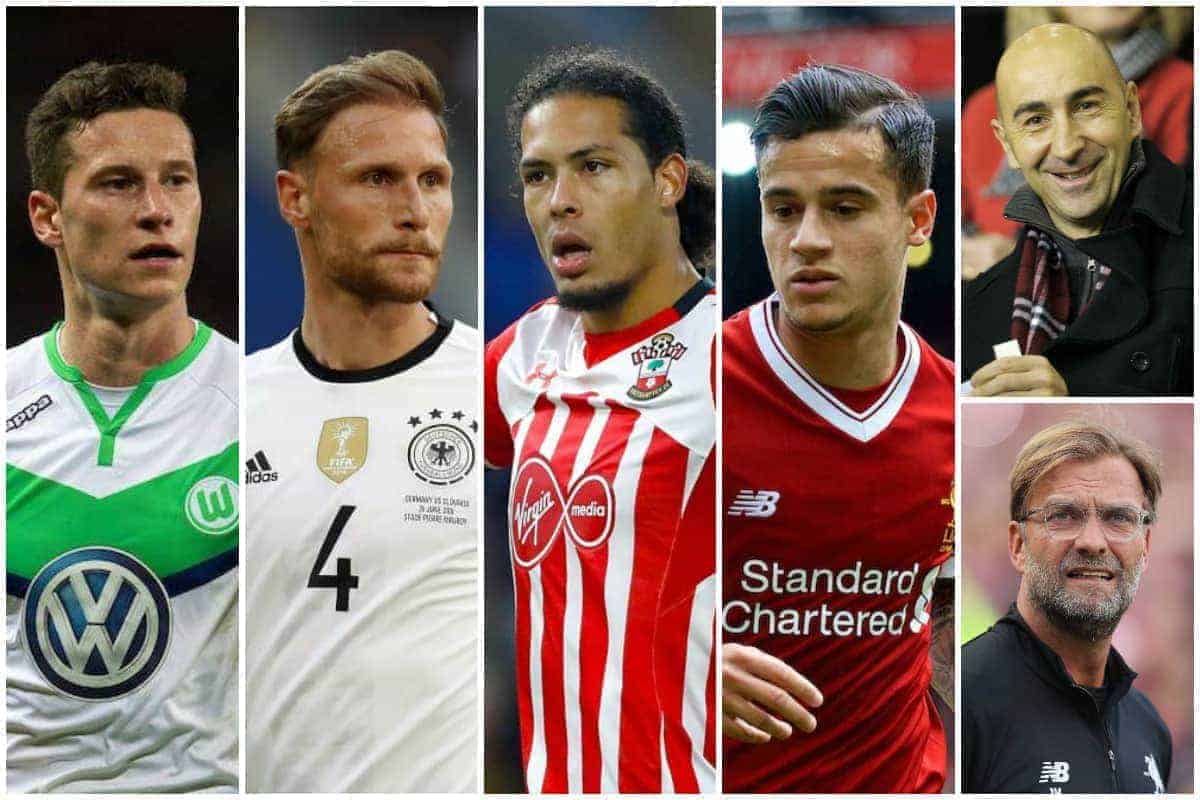 We round up the latest Liverpool transfer news and rumours, with two of Jurgen Klopp‘s rumoured former targets reportedly becoming available.

Thursday marks a fortnight before the end of the transfer window, and so far the Reds have made just three signings: Dominic Solanke, Andrew Robertson and Mohamed Salah.

Just four have been sold, too, with another five leaving on loan and seven released, and the next two weeks are likely to be busy at Melwood.

Here’s the latest from the rumour mill as Klopp sets his sights on further additions.

Given the lack of activity since Robertson’s move from Hull City in July, there is considerable unease growing on Merseyside as August 31 approaches.

The first two games of the season have highlighted clear deficiencies in Klopp’s current squad, and speaking ahead of Saturday’s clash with Crystal Palace, he said the Reds are “still looking.”

However, the German also claimed he would be content with his current group “if the transfer window would have ended yesterday.”

“A few things can happen on both sides, but obviously everything leads to the direction of August 31,” he told reporters.

“And it will, I can imagine, be a busy day, and if we [will be] involved in this busy day I don’t know, but we will see.” But the Spaniard has stuck the knife in this week, insisting signing Philippe Coutinho is “arguably essential” for Barcelona this summer.

“Given what Liverpool have already rejected—a latest bid of £91 million—they seem intent on keeping him,” he wrote in his column for the Independent.

“The question is whether Barca can offer enough to prise him away; to make it basic business sense for Liverpool to accept.

“Doing that is arguably essential to the Catalans because they badly require both real first-team quality as well as strength in depth, and that was even before selling Neymar.”

Could Reds Return For 2 Former Targets?

With Klopp assessing his options in the closing weeks of the summer transfer window, the return of two former targets to availability could pique the 50-year-old’s interest.

Firstly, Paris Saint-Germain forward Julian Draxler has been told he has no future at the club by manager Unai Emery, according to L’Equipe.

This comes after Neymar’s £198 million move to the Parc des Princes, and with Liverpool unsuccessful in their pursuit of Draxler in January, they could return with a renewed bid.

Elsewhere, Draxler’s former Schalke team-mate Benedikt Howedes could leave after 16 years with the club, with Bild claiming he would be available for around £18 million.

This is Anfield’s Henry Jackson believes signing Howedes would be a “no brainer” given the current options at centre-back.

The addition of the Germany duo would certainly solve some issues in Klopp’s squad, particularly if Coutinho does leave for Catalonia.

While hopes have faded over a summer move for Leipzig midfielder Naby Keita, speculation continues over the Reds’ interest in Southampton centre-back Virgil van Dijk.

On Wednesday, Saints chairman Ralph Krueger said he was “adamant” the Dutchman won’t be sold this summer, but also added that “over the years we have spoken I don’t give definite answers where there isn’t a definite.”

Van Dijk is still training alone away from Mauricio Pellegrino’s squad this week despite recovering from a ‘virus’, having handed in a transfer request earlier in August.

And according to BBC Radio Solent’s Adam Blackmore, the Southampton manager is “frustrated” over the situation.

“The situation is the same,” he quotes the Argentine as explaining, “I have nothing to say.”

The hope is that the Saints relent over the next two weeks and Liverpool are able to secure Van Dijk’s arrival before August 31.